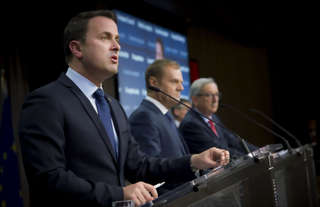 The Luxembourg Presidency has been marked by "a tragic and unprecedented worsening" of the refugee crisis and the tragic terrorist attacks in Paris on 13 November 2015, stated Xavier Bettel who believes that Luxembourg has acted as a mediator to find common solutions. He welcomed the number of significant agreements reached within the Council and with the European Parliament, such as the proposed Passenger Name Record (PNR) Directive.

A Presidency marked by the refugee crisis and the Paris attacks

The Luxembourg Presidency has been marked by "a tragic and unprecedented worsening" of the refugee crisis and the tragic terrorist attacks in Paris on 13 November 2015, stated the Prime Minister. "These events have had a significant impact on the work of the Presidency and have required a responsive and determined approach to be taken at EU level. We have had to respond to emergencies on an unprecedented scale and several extraordinary meetings of the Council were held in order to respond to the challenges", he declared.

The Presidency worked on emergency measures to help handle the refugee crisis, and developed a coherent strategy to counter the root causes of the phenomenon. "We have made sure to safeguard the Schengen acquis and it is imperative that we continue to strengthen external border controls to reach our goal", stated Xavier Bettel, before stressing the need to "improve" hotspots, "accelerate" the relocation process and to "give adequate attention" to the return policy.

The Presidency also hosted the high-level Eastern Mediterranean – Western Balkans Route Conference which the Prime Minister believes led to enhanced cooperation between all countries concerned, including Turkey, Libya and Jordan. He is of the opinion that the Valletta Summit made it possible to address the migration crisis together with African countries so as to "find solutions involving all parties", explained Xavier Bettel.

Following the attacks in Paris, the Luxembourg Presidency identified well-defined priority actions such as the proposal for a Passenger Name Record (PNR) Directive, the compromise text of which was agreed by mutual agreement with the European Parliament and approved by the Council on 4 December 2015. Xavier Bettel also referred to improved exchange of information, more systematic use of databases, combatting radicalisation and cooperating with third countries.

"In spite of these events, which had a very deep effect on Europe, the Luxembourg Presidency worked hard to make progress on the EU's different areas of action, and rigorously pursued the implementation of its own work programme centred around the seven priorities which it had committed to under the motto 'A Union for the citizens'", continued the Prime Minister. He welcomed the political agreement that was reached on the interinstitutional agreement, called on 'Better Regulation'. "The agreement will have a positive and lasting effect on the way the institutions cooperate, and this will be in the interests of and for the benefit of European citizens", he stated.

Xavier Bettel also discussed the efforts of the Presidency to advance measures to mobilise investment for growth and employment. Within the Competitiveness Council, the Presidency implemented innovative working methods and launched the Competitiveness 'Check-up',  a mechanism which the Prime Minister believes will enable the Council to monitor major developments in the real economy and to take necessary measures as quickly as possible. The Council was also able to agree on a package of measures to revive competitiveness in the European steel industry.

The Prime Minister also highlighted the work of the Presidency to deepen the European social dimension, in line with the objective of creating a Europe with a "Triple A social rating". He stated that a number of exchanges on the social dimension had taken place within the EPSCO Council, in particular with regard to the economic governance of the EU, especially the eurozone.

Another "key" priority of the Presidency was to "make the single market more dynamic by focusing on digitalisation". In that context, Luxembourg continued to review the Digital Single Market Strategy. "I would like to draw attention to the agreement reached on the new 'data protection' package which represents a major step forward in the creation of that market", stated Xavier Bettel, before highlighting the adoption of the EU Cyber Security Strategy that "will be transformed into a directive".

The Luxembourg Presidency placed European competitiveness "in a global and transparent framework". With regard to the fight against global tax fraud, Xavier Bettel welcomed the fact that the Council reached an agreement in October on the Directive on the automatic exchange of information on tax rulings. The OECD's work on the Base Erosion and Profit Shifting (BEPS) initiative was also finalised and the Council adopted "important conclusions" in that regard in December. "That sent a strong signal from the EU concerning the implementation of BEPS recommendations", stated Xavier Bettel.  Within the framework of the Transatlantic Trade and Investment Partnership (TTIP), the Presidency was also largely involved in modernising the Investor-State Dispute Settlement (ISDS) mechanism and launched an "important" dialogue with social partners.

The Luxembourg Presidency pledged to focus on sustainable development, in particular by accelerating the transition towards a low greenhouse gas emission economy, stated Xavier Bettel, welcoming the historic and innovative agreement reached and the full coordination with the COP21 French Presidency.

By way of conclusion, Luxembourg's Prime Minister confirmed that this Presidency has demonstrated that the system of rotating presidencies "works well" and that a small country is perfectly able to take responsibility for making progress in Europe, even in particularly difficult times.

The small country of Luxembourg acted as a mediator

The President of the European Council, Donald Tusk, congratulated Luxembourg on behalf of European leaders for an "outstanding Presidency" which was "extremely effective". He welcomed the "very difficult work" carried out by the Presidency, in particular concerning the refugee crisis, the PNR and data protection.

As for the President of the European Commission, Jean-Claude Juncker, he declared that the Luxembourg Presidency had been "a great success" on many levels. He stated that he "particularly appreciated the commitment shown by Luxembourg in organising" the debate on the refugee crisis in "good, but often very difficult conditions". Under the Luxembourg Presidency, an agreement between the Member States and the European institutions was also reached with regard to the PNR, welcomed Jean-Claude Juncker who believes that it is an "incredible achievement" since "we have been waiting for a conclusion for several years". That finding is also true with regard to data protection, concluded Jean-Claude Juncker, who emphasised the "excellent work" carried out by Luxembourg.

Responding to journalists, Xavier Bettel stated that the small country of Luxembourg acted as a mediator and listened to other Member States during its "difficult" Presidency in order to find common solutions. He stressed that reaching an agreement among 28 Member States was not easy, but that there had been in recent months a transition towards mutual trust and a spirit of solidarity, "which does exist". "We are in a difficult situation and we have not emerged from the crisis", stated Xavier Bettel, while calling for a "demonstration of that solidarity" because, otherwise, the European project will become "very fragile".