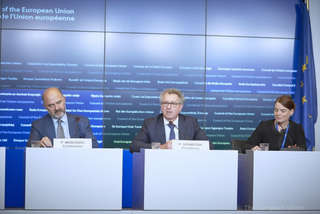 European Union (EU) Ministers for Economy and Finance met in Luxembourg on 6 October 2015 for an ECOFIN Council chaired by the Luxembourg Minister for Finance Pierre Gramegna. The Ministers expressed their political agreement on a proposed Directive on the automatic exchange of information (AEI) on tax rulings, they debated the subject of the financial impact of the refugee crisis and exchanged views about the action plan which aims to create a Capital Markets Union.

Agreement on the automatic exchange of tax rulings

On the basis of a compromise agreement brokered by the Luxembourg Presidency, the Council expressed its political agreement on a proposed Directive designed to improve transparency in the context of advance cross-border tax rulings, by making their automatic exchange between tax administrations compulsory.

The proposed Directive is part of a series of measures presented in March 2015 which aim to prevent tax avoidance and aggressive tax planning by companies. It aims to modify Directive 2011/16/EU on administrative cooperation in the field of taxation, which defines the practical terms and conditions for exchanging information in order to include advance tax rulings. Specifically, the Directive requires Member States to proceed with AIE in the field of advance cross-border tax rulings, as well as advance pricing agreements. The Commission will be able to implement a secure central directory, accessible to all Member States and the Commission, where the information exchanged will be stored.

During the press conference held after the meeting, the Luxembourg Minister for Finance, Pierre Gramegna, hailed the political agreement reached by the Council. "This agreement between Member States was reached in a very short time", he said, noting that the details could be finalised before the end of the year with transposition ensured by Member States by 1 January 2017.

In terms of retroactivity, a matter of some concern for Member States, the Presidency compromised finally on a period of five years, and all rulings still in force dating back to 2012 will have to be exchanged.  The Commission had proposed a retroactivity period of ten years, but, in view of Member States" concerns about the administrative consequences of such a measure, the Presidency proposed a period of five years.

When asked by the press, Minister Gramegna confirmed that, for many countries, a period of ten years would have meant excessive administrative work. Furthermore, since the average duration of rulings is rarely more than five years, "the majority of them of them will be covered", he added. "Some Member States were hostile to the idea of retroactivity and, even very recently, the agreement tended towards a period of three years", revealed the European Commissioner for Economic and Financial Affairs, Taxation and Customs, Pierre Moscovici. "Although I feel that a period of ten years is too long, three years is too short, therefore I believe that five years is reasonable", he declared.

Pierre Gramegna underlined the fact that the debates had helped "to widen the scope of the future Directive". "Decisions which are no longer in force will also be exchanged, starting from 1 January 2014", continued the Minister. Also, the clause which allows a country to exempt decisions concerning small and medium enterprises was amended. These companies will benefit from exemption up until 1 April 2016 and not 1 January 2017.

In this context, the Minister noted the "large consensus hailed by all the Member States present" and revealed a "genuinely opportune timetable" with the OECD having published the results of its BEPS initiative the day before. "By reaching an agreement today, the EU is leading the way. It is a strong signal to the rest of the world for transparency in tax matters".

Pierre Moscovici described this agreement as a "major success, not to say a historic event", adding that he did not remember an agreement being reached so quickly, "especially with this level of ambition, complexity and, what is more, on a subject on which we have to rule unanimously". The Commissioner hailed an agreement which "marks the end of the practice of obscure agreements between companies and authorities which help facilitate tax abuse". "This agreement means more openness and cooperation between Member States about companies" tax rulings without any secrecy in terms of the information which will be shared", he declared.

The financial impact of the refugee crisis under consideration

The Ministers also raised the topic of the spending generated by Member States as a result of the refugee crisis. Pierre Moscovici recalled that the Commission was going to apply the EU's Stability and Growth Pact (SGP) rules in a "coherent manner" to all Member States in order to ensure fair treatment, a position which it had already expressed during the informal meeting of Ministers for the Economy and Finance in Luxembourg on 11 September 2015. Indeed, in September, several Member States had asked the Commission to proceed with a budgetary and economic analysis of the impact of the refugee crisis. The Presidency invited the Commission to analyse the extent to which this crisis could be considered as an "exceptional circumstance" by virtue of the SGP.

However, the Commissioner indicated that, at this stage, the Commission did not have enough information to define exactly how this additional spending could be treated in the frame of the SGP rules. "But, given the likely long-term nature of the flow of refugees, we can't consider this additional spending to be "one-off" in the sense of the Pact", he stated, ensuring that "it is the Pact which will be the rule" and that "everything will be done according to the precise evaluations which now need to be carried out".

Implementation of the Banking Union

The Ministers reviewed the implementation of the European Banking Union, in particular the subject of the tools for defaulting bank recovery and defaulting resolution. The Commission provided updated information about the transposition of a directive concerning bank recovery and resolution, the ratification of an intergovernmental agreement on the Single Resolution Fund (SRF), the work of the Single Resolution Board (SRB), and the transposition of a Directive on deposit guarantee schemes.

It was recalled that the SRF, designed to finance the orderly resolution of a defaulting bank, forms part of the "resolution" section of the Banking Union and should gradually be strengthened from January 2016 onwards. It will be replenished by the national contributions of the Member States collected from the banking industry and it will be progressively mutualised, with a capital supposed to reach some 55 billion euros between now and 2023.

On this subject, the Ministers discussed the bridge financing which should permit the Fund to have sufficient proceeds during its launch phase. "We have clearly identified a means of completing the SRF's bridge financing, and this involves national credit lines", revealed Pierre Gramegna, who added that the EU's Economic and Financial Committee was in charge of preparing the guidelines for Member States in this context.

The Council also exchanged views about the action plan for building a Capital Markets Union, adopted by the Commission on 30 September 2015, calling for its rapid implementation.

The Commission's action plan aims to implement a Capital Markets Union in the EU which should be fully operational by 2019. It laid out various measures designed to strength capital markets in order to attract a greater volume of investment, including foreign investment, for European companies and infrastructure. One of the main objectives is to improve access to financing for SMEs and young European companies, especially in the sector of innovative industries.

On this subject, the Minister for Finance hailed "a very interesting exchange of views". On this matter, the Minister highlighted that the works would focus on "some of the most urgent Directives", the first being a proposal on securitisation which aims to make this activity more transparent, simpler and of better quality, with the second being a review of the prospectus directive which should facilitate access to capital markets for SMEs.

"We all agree on the objectives and, as current holders of the Presidency, we want an ambitious work plan with the objective of holding a general discussion before the end of year", declared Pierre Gramegna. He again noted that, for the prospectus directive, the proposed review of which should be submitted by the Commission in November, the Presidency will only be able to start discussions. However, its objective is to work quickly on the proposal on securitisations, which is already on the table, and wants to obtain a general approach at the ECOFIN Council in December 2015.