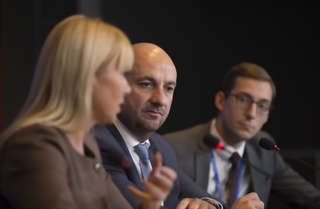 European Union (EU) Ministers in charge of competitiveness held a Competitiveness Council meeting in Luxembourg on 1 October 2015, chaired by Etienne Schneider, Deputy Prime Minister and Minister for the Economy. The discussions focused on the new working method introduced by the Luxembourg Presidency, the "Competitiveness Check-up", with a view to establish more competitive framework conditions for businesses, on the ETS (Emissions Trading Scheme ) system, on control of CO2 emissions in the motor industry in the context of the Volkswagen affair, and on progress in implementing the unitary patent protection system.

The Ministers' discussions focused first and foremost on the latest economic developments and large-scale structural reforms to be implemented at European and national level, said Etienne Schneider at the press conference that followed the Council meeting. This is the first meeting of the Competitiveness "Check-up", which is a new working method set up by the Luxembourg Presidency and presented by Etienne Schneider at the Informal Meeting of Ministers in charge of competitiveness in Luxembourg on 20 July 2015. The Presidency intends to enhance the role of the "Competitiveness " Council both in terms of reviewing horizontal and sectoral economic issues and in terms of monitoring the integration of competitiveness in other EU policies.

The objective of integrating competitiveness into other relevant policies is to ensure that the impact of competitiveness on the European economy is better taken into account when implementing EU rules and devising new initiatives, in view of fostering economic growth and creating sustainable jobs.

Etienne Schneider pointed out that 77 % of European companies believe that EU regulations are not sufficiently clear and predictable. Moreover, the level of investment in the EU remains low (50 % lower since 2008) and integration in the domestic market has slowed down. According to the Ministers "our laws should be more fit for [the] purpose".

The Ministers then discussed the reform of the European Emissions Trading System (EU ETS), proposed by the Commission on 15 July 2015. According Etienne Schneider, it refers to the burning issue that will make it possible to test the EU's ability to implement real competitiveness mainstreaming across all policy areas, between on the one hand the goal of reducing greenhouse gas emissions and on the other, the protection of European competitiveness through the prevention of carbon leakage.

The Presidency has therefore proposed to involve the Competitiveness Council in discussions from the outset and to allow the Ministers for the Economy to express themselves in close coordination with the Ministers for the Environment, who are primarily responsible for this matter, Etienne Schneider reiterated.

EU Ministers agreed on the fact that it was necessary to create a framework that guarantees widespread legal security and encourages companies to invest long-term in the EU, said Etienne Schneider. In other words, a system that rewards the most efficient and innovative players in all energy-intensive industries, the Minister specified.

Emissions tests in the automotive industry

Referring to Volkswagen, that admitted in late September 2015, after the revelations of the US Environmental Protection Agency (EPA), that 11 million of its diesel cars were equipped with software that falsified emission test results on diesel engines, Etienne Schneider explained that it was important to restore confidence in the markets and to ensure that all necessary measures are taken. "Member States will do all to clarify the situation, he added, and we must restore consumer confidence in the sector and especially avoid indulging in doom-mongering." The minister said that „the solidarity between the Member states with Germany was exemplary” and that “the ministers trust the crisis management of the German government and of Volkswagen”.

Elżbieta Bieńkowska, the European Commissioner for the Internal Market, Industry, Entrepreneurship and SMEs, emphasized the importance of "immediate action", referring to investigations launched in some Member States. According to her, the Commission is prepared to "monitor the process" and carry out the coordination thereof. "We need to be informed about the facts in all the Member States and have a complete picture of the situation. We owe this to consumers and the automotive industry. It must be said that at present, there are no indications of a similar situation to that in the USA arising in Europe, " she said. To regain the confidence and credibility in the sector, it is, in her opinion, necessary to verify that the emissions in the European automotive industry "are all right".

The Commissioner said that the Commission is finalizing a test procedure to measure emissions on the road under real driving conditions (Real Driving Emission, or RDE) instead of measuring them in laboratories. This test, under discussion "for four years at European level", is expected to be implemented from January 2016. In light of the Volkswagen scandal, the Commission will also review its proposal on setting up a type-approval system for vehicles, added the Commissioner.

The Council has acknowledged the updated information on the progress made in implementing the unitary patent protection system.

The unitary patent protection system will come into force when thirteen participating countries (including France, Germany and the United Kingdom) have ratified the agreement on the Unified Patent Court. To date, eight countries have ratified the agreement signed on 19 February 2013. Elżbieta Bieńkowska welcomed the fact that "we are about to conclude a procedure that has lasted 40 years", and highlighted "the significant progress made in recent months". She praised Italy for joining the enhanced cooperation on unitary patent protection. To enable the implementation of the unitary patent from 2016, "it is urgent that we conclude the technical negotiations", she said.

On the sidelines of the meeting, the Ministers were invited by the Luxembourg Presidency to sign a protocol accord concerning the Unified Patent Court. Once established, the court will handle disputes related to European patents. This protocol will enable the provisional application of institutional, organizational and financial regulations of the agreement six months before its entry into force.

The Council has approved the new rules on "roaming" and neutrality of the Internet, by adopting its position at first-reading. As a reminder, the Commission, the European Parliament and the Council reached a trialogue agreement on 30 June 2015 to end roaming charges in June 2017 and on strict rules of Internet neutrality. The agreement was approved by Coreper on 8 July 2015.

The Council also adopted a decision approving the conclusion of a World Trade Organisation (WTO) protocol by reaching an agreement on trade facilitation. The agreement aims to simplify and modernize the procedures for the movement of goods, to support small businesses and developing countries to participate in international trade. The Agreement on Trade Facilitation was signed in December 2013 by WTO members as part of a larger package called "Bali".

The Ministers also decided to conclude the free trade agreement between the EU and South Korea. The agreement, which was signed in October 2010, provides for the progressive liberalisation of trade in goods and services. It is the first of a generation of free trade accords, and is the EU's first trade deal with an Asian country.

In conclusion, the Council adopted a regulation that brings the EU ban on trade in seal products into compliance with World Trade Organisation (WTO) rules.