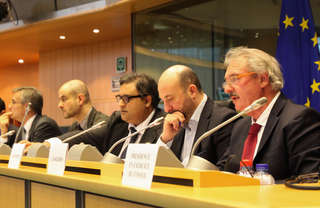 In terms of migration policy, the Minister stated that the Presidency had laid the foundations for an integrated policy combining asylum, reception, border security, returns and security as one 'package'. That logic 'reflects the complexity of the crisis, which demands a global response', he said, pointing out that it is essential that this response is based on the fundamental EU values of solidarity and responsibility which have therefore had to be translated into concrete measures.

With regard to solidarity, progress has been made on the agreements reached within the Justice and Home Affairs (JHA) Council on the concepts of relocation within the EU (160,000 people) and resettlement outside the EU (22,000 people) for persons in need of international protection, he held, welcoming the close cooperation of the European Parliament. 'The challenge that we are now facing is implementation' which is currently 'totally inadequate', observed Jean Asselborn, who called for it to be 'prioritised knowingly'.

As for reception and first reception facilities (so-called 'hotspots'), the Minister stressed that 'from an abstract concept, implementation measures are ongoing' with 'increasingly operational centres in Italy and Greece'. While there is still much to be done, the course is set, stated the Minister who, however, finds it 'unacceptable' that some seem willing to shirk their responsibilities. 'Such a lack of solidarity threatens to undermine the whole concept', he said.

With regard to resettlement, Jean Asselborn observed that while the mechanism has, up to now, been explored only by countries at national level, the 28 Member Sates and Associated Members are now looking to work within the European context. Such programmes could, in the future, represent an important avenue in the EU, by promoting sustainable solutions for those concerned and demonstrating EU solidarity with the countries receiving the majority of the world's refugees, stated the Minister.

Moreover, a Humanitarian Admission Scheme is set to be finalised with regard to Turkey, he continued, while warning that we should not create expectations that the EU cannot meet, or secondary movements in the region.

Looking to the future, Jean Asselborn considered that commitments made in terms of relocation and resettlement could be interchangeable. In response to questions from MEPs, the Minister observed that, in general terms, the relocation policy is not yet operational and that it would be the case for the first three or four months, as the system was 'not ready'. However, he took the view that the mechanism should not be withdrawn since it could be necessary in the future, but, for the moment, 'it is not the mechanism to facilitate sharing the burden'.

Lastly, Jean Asselborn drew attention to the EU's enhanced solidarity with third countries while, under the Luxembourg Presidency, the EU has also strengthened financial, material and operational cooperation with third countries in the field of migration. Furthermore, the Council cooperated with the African continent to organise the Valletta Summit in November 2015 and with the Western Balkan countries and Middle East to hold the high-level Conference on the Eastern Mediterranean-Western Balkans Route and the EU summit with Turkey in October 2015. 'But cooperation must be further strengthened', held Jean Asselborn, who believes that statements adopted and action plans agreed must be translated into concrete projects and be subject to follow-up and evaluation of their impact on the ground.

In terms of responsibility, Jean Asselborn observed that the EU should receive those in need of protection, but that it should also protect its borders and ensure the return of those not in need of international protection. At the same time, and to prevent irregular migration, legal migration must be encouraged.

The Minister also observed that for any asylum policy to be consistent and credible, it must be accompanied by an effective return policy and that the Luxembourg Presidency has been committed to adopting targeted and operational conclusions in that regard. Moreover, the adoption of conclusions on safe countries of origin should facilitate harmonised implementation, and the revision of Frontex's mandate will also play a key role, stated Jean Asselborn.

The Minister then observed that, in the short term, it is necessary to implement the deepening of the Schengen acquis and to establish the common management of external borders. 'Decreased national sovereignty and increased common responsibility should address the shortcomings observed', noted Jean Asselborn, who called for the European Commission to make the most of all avenues open to it and make unscheduled visits within the context of the Schengen evaluation mechanism.

In that regard, although the Commission has held that national decisions to reinstate internal border security checks are justified, the Minister stressed that the maximum extension of 6 months is set to expire in March for the first Member States. 'If the conditions remain fulfilled, then a European framework should take over upon expiry of those deadlines', considered Jean Asselborn, who believes that simply waiting for those deadlines to expire without any preparation at European level 'would be nothing short of irresponsible'.

Optimal management of external borders must be accompanied by more extensive legal measures, continued the Minister, who underlined the importance attached by the Presidency to finalising negotiations with the Parliament on the Researchers and Students Directive, which will make the EU more accessible and attract more young talent in Europe.

Jean Asselborn then highlighted the need to strengthen the external border control system, drawing attention to the fact that an 'open yet controlled' migration policy requires full compliance with the Schengen acquis and rules on asylum. For asylum law to be applied consistently, the Minister called for truly harmonised rules, while noting that it is also necessary to guarantee uniform implementation and therefore to ensure convergence in decision-making at European level, as is the case in respect of patent protection.

In response to questions from MEPs, Jean Asselborn specified that if a global response is not found with regard to external borders, the Schengen Area will collapse. However, he considered that the management of external borders is not the responsibility of peripheral Member States, but that the EU should respond as a Union.

The Minister then addressed the rule of law which 'constitutes one of the key values on which the EU is based'. Jean Asselborn recalled in that regard that the Council adopted conclusions in December 2014 in which it undertook to launch an annual political dialogue between all the Member States at Council level in order to defend and safeguard the rule of law within the EU, with the first dialogue being held in the General Affairs Council of 17 November 2015.

'The Luxembourg Presidency considered it a priority to ensure that the dialogue was held in accordance with the principles of objectivity, non-discrimination and equal treatment between all the Member States', stated the Minister. Furthermore, he pointed out that the Presidency had also welcomed the fact that a non-partisan approach had been adopted in respect of the exchange. 'The exchange proved to be fruitful and Member States actively contributed their views on national approaches and experiences', observed Jean Asselborn.

As regards the overview of that first political dialogue, the Presidency estimated that it had been welcomed by all Member States and that the exchange had made it possible to identify the areas in which additional efforts at national and European level were necessary, stated the Minister. He believes that the dialogue should not, however, be regarded as an abstract intellectual exercise, while any interference from the government in the operation of the judicial system or any attempt to gag the media 'would be contrary to the very basic values of the EU'.

'The Treaties are very clear with regard to the Copenhagen Criteria', he stressed, underlining the fact that 'it is for the European institutions to condemn any abuses with force and, where necessary, to take disciplinary action' even though, within the EU, there is no principle of intervention in the internal affairs of Member States with regard to the rule of law.

According to the Minister, the political dialogue launched under the Luxembourg Presidency has paved the way for a constructive exchange of views, thereby encouraging Member States to respect the rule of law and to carry out self-critical assessment in that regard'. However, he stated that he was well aware that it was only a first step given the recent developments in some Member States. This 'upsets me and strengthens my belief that we must place greater emphasis on compliance with the rule of law within the EU', concluded Jean Asselborn.