Ministers responsible for the Economy came together in Luxembourg on 20 July 2015 for an informal meeting to address issues of competitiveness. Under the title "Trading beyond borders. Competing globally.  What the EU can do for you", the meeting chaired by Étienne Schneider, Luxembourg's Deputy Prime Minister and Minister of the Economy, focused on the potential benefits of well-thought-out and coherent rules for European companies. The aim was to find an answer to the following question: "How can we ensure that Europe and its rules bring tangible added value to our economies?"

"There is an almost unanimous desire for better-thought-out and more coherent European rules", stated Etienne Schneider 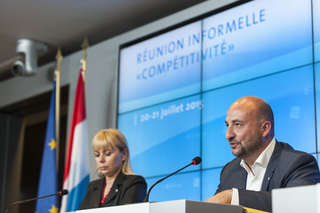 "Our goal is to maximise European added value and to eliminate the cost of "non-Europe", that is to say the costs triggered by cross-border business", stated Etienne by way of an introduction at the press conference. In his view, the fact that companies must comply "with all details, however insignificant", of 28 countries" different national legislations "stifles" their willingness to sell across national borders. "It is the consumer who is set to lose out because they are not free to purchase what they want, where they want", stressed the Minister.

In order to encourage an open discussion, the Luxembourg Presidency invited several speakers to share their own experiences and perspectives with the Ministers and with Elzbieta Bienkowska, European Commissioner for the Internal Market and Industry. Among the speakers was the former European Commissioner for Trade and former Director-General of the World Trade Organization (WTO) Pascal Lamy, Luxembourgish businessman Gérard Lopez, President and CEO of SES Karim Michel Sabbagh and Ann Mettler, who is the Head of the European Commission's European Political Strategy Centre.

"Their insights have made it possible for us to understand this issue from very different perspectives", stated Etienne Schneider. "As to the substance, I conclude that there is an almost unanimous desire for better-thought-out and more coherent European rules", he said. 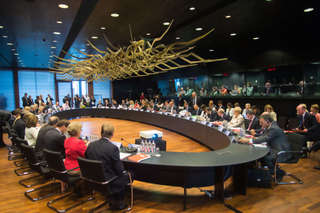 Etienne Schneider believes that the EU Competitiveness Council must play "a more active role" to make European rules more effective. "A key priority of the Luxembourg Presidency is to make our Council more political and more dynamic", he stated. "It is also necessary to strengthen our weight in relation to other Council configurations", he continued.

To better take account of the complexity of factors which affect competitiveness and the internal market, a new way of working will be introduced for the first time in the next Competitiveness Council in October. "At the beginning of each Competitiveness Council meeting, I would like to assess competitiveness", stated Etienne Schneider. "This will be the first item on the agenda", he stated. In this context, Elzbieta Bienkowska will present key economic indicators and latest developments, including at sectoral level.

"I will then present a list of key issues – both existing and future – which are liable to have a significant impact on competitiveness and the internal market, regardless of whether they fall under the mandate of the Competitiveness Council or other configurations of the Council", continued the Minister.

This objective of mainstreaming is to ensure that the competitiveness of the European economy is better taken into account when new European rules are being developed. "The idea is also to contribute to better upstream coordination of the development of new policy initiatives by the Commission", stated Etienne Schneider. To forthcoming Competitiveness Council meetings, he also intends to invite commissioners who are not directly responsible for competitiveness but whose decisions have "some influence" on European competitiveness. In particular, Etienne Schneider mentioned Commissioners responsible for the Environment and Social Affairs.

Elzbieta Bienkowska stressed the "necessity of mainstreaming competitiveness across all other configurations of the Council and discussing genuine economic challenges". She believes that such an approach would be "very useful" in terms of strengthening the European economy. She is of the opinion that energy, the environment, transport and the labour market are all areas which "can contribute to the single market and to European competitiveness", to the extent that they must be discussed by Ministers for Competitiveness.