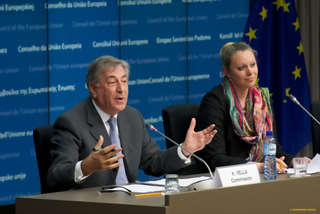 This strategy, adopted in May 2011, aims at halting the loss of biodiversity and the degradation of ecosystem services in the EU by 2020 and restoring them in so far as feasible, while stepping up the EU's contribution to averting global biodiversity loss. The EU biodiversity strategy contains six targets: fully implement the Birds and Habitats Directives, maintain and restore ecosystems and their services, increase the contribution of agriculture and forestry to maintaining and enhancing biodiversity, ensure the sustainable use of fisheries resources, combat invasive alien species, and finally, help avert global biodiversity loss.

During the press conference after the Council meeting, Carole Dieschbourg welcomed the response given by the Ministers for the Environment to the petition launched by 500 000 citizens 'for ambitious biodiversity policies and against the watering down of the EU directives on nature'.

The Minister listed the 'clear messages' set out in the Council conclusions. The conclusions emphasise that the protection of nature involves a wide range of resulting benefits, such as 'the protection of our health and the climate and the supply of drinking water'. The conclusions recognise the European directives on nature, i.e. the Habitats and Birds directives, as a 'cornerstone for the protection of our environment in Europe'. The Ministers took the view that the directives are working and are bringing results and that they must be fully implemented and financed by the Member States. They stressed the need to 'do more in order to ensure better coordination with agricultural policies', by strengthening the cross-sectoral aspect of the policies. From their perspective, the elimination of harmful subsidies is also key to greater biodiversity. 'What remains clear is that we should not go back on the Nature directives. Doing so would jeopardise the legal certainty we have now, which would not be a good thing', the Minister declared.

Carole Dieschbourg concluded that 'this is a clear call from the Ministers for the Environment and a large number of European citizens', stressing that 2016 will be a 'key year for biodiversity'.

Reduction of national emissions of pollutants

The Ministers adopted a general approach for the directive on the reduction of national emissions of certain pollutants (NEC Directive) by a large majority of 24 Member States. The Council's general approach will serve as a basis for the negotiations with the European Parliament on this issue, which adopted its position on the proposal for a directive in October 2015.

The Minister for the Environment declared that 'after difficult discussions, we achieved a balanced compromise, which is supported by many Member States and is still ambitious', noting 'a step in the right direction'.

'However, it is only the first step', she noted. She stressed that 'we should strive towards an outcome which respects the level of ambition of the directive and the spirit of the Paris Climate Agreement'.

The NEC directive proposed by the Commission as part of the air quality package in December 2013 reviews and updates the annual caps for emissions of certain air pollutants currently in force at national level. In concrete terms, these limits apply to four pollutants targeted under the previous directive: sulphur dioxide, nitrogen oxides, volatile organic compounds and ammonia. The Commission also proposes to introduce caps for two other pollutants: fine particulate matter and methane. In addition, it proposes intermediate emission levels for the year 2025.

The main aim is to address the remaining health risks and environmental impacts posed by air pollution. The directive also intends to align EU law with international commitments (following the revision of the Gothenburg Protocol in 2012).

The Council's position contains caps for fine particulate matter, but not for methane, as proposed by the Commission. The press release from the Council states that 'this pollutant was left out of the scope because of concerns about overlaps with future measures on climate and energy linked to emissions of greenhouse gases'.

Regarding the 2025 intermediate emission levels, the Council introduced the possibility for Member States to follow a non-linear trajectory in their reductions if this is more efficient.

The Council also proposes some additional flexibility for Member States. For instance, it introduces the possibility to average annual emissions with emissions of the preceding year and those of the following year, and the possibility to compensate for non-compliance regarding one pollutant with an equivalent reduction of another for a limited time.

Karmenu Vella, European Commissioner for the Environment, noted that air pollution is the main environmental cause of mortality in the EU, with 400 000 early deaths each year. Hence the importance, in his view, of improving air quality in the EU. The Commissioner lamented the fact that the approach adopted by the Council 'does not come close enough' to the objective of reducing the environmental impact on human health by 52 % by substantially reducing the main pollutants, as proposed by the Commission. In his view, this objective is 'reasonable' and 'achievable'. 'Each year in the EU, we can cut 4 000 early deaths for each percentage point of reduction in our objectives', he noted.

He concluded that 'we will continue to work with the Dutch Presidency to see how specific problems raised by certain Member States can be integrated without compromising the overall ambitions', noting that the revision of the NEC directive is a priority for the Commission's work programme for 2016.

In response to a question from a journalist, Carole Dieschbourg noted that four countries did not follow the proposed figures: Denmark, Germany, Austria and Poland. However, 'it is important to have everyone on board for the negotiations', she stressed.

During the lunch break, the Council discussed issues in relation to the various tests to measure real driving emissions and manipulation of emission control systems. The Ministers discussed the responsibility of the automotive industry for better air quality, referring to air quality standards and controls in the sector.

The Ministers also took stock of the United Nations Conference on Climate Change organised in Paris (COP 21). Carole Dieschbourg welcomed the fact that the EU's main demands feature in the final agreement. 'Our voice was strong because we were united', she remarked.

However, the Minister noted that the 'most difficult part' is yet to come, which involves the implementation of the 'historic' decisions from Paris.

The Ministers were updated by the Commission on the recent package of proposals designed to promote the circular economy. 'As you know, the Ministers for the Environment are calling for an ambitious proposal', Carole Dieschbourg declared. 'Many of them have complained that we have lost time, as we could have worked on the basis of the previous proposal', she noted.

Carole Dieschbourg added that 'we now need a detailed evaluation of this proposal to ensure that the objectives to reduce emissions are ambitious and whether they cover all aspects of waste production', a task that will be continued by the Dutch Presidency.

The Commission also presented Ministers with a report on the state of the energy union.