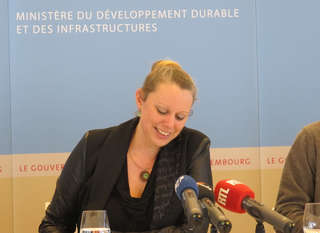 Two days after an agreement was reached during COP21 in Paris on tackling climate change, Luxembourg's Minister for the Environment and President of the Council of Ministers for the Environment of the European Union (EU), Carole Dieschbourg, held a press conference in Luxembourg on 14 December 2015 to give an overview of the climate change conference.

The Minister hailed the 'successful' conference with 'the first universal and legally binding agreement' on climate change having been reached, while warning that it must now be implemented. 'It establishes a good basis to accelerate the transition to a new economy and living together', she stated.

Carole Dieschbourg referred to the long-term objective to limit temperature increase to 'well below 2 °C compared to pre-industrial levels' and 'to aim to limit the increase to 1.5 °C' as one of the pillars of the agreement. She also drew attention to the periodic review cycle (every five years) enabling countries to set more ambitious targets, clear rules allowing for transparency and regular reporting, as well as the commitment made to mobilise USD 100 billion per year from 2020 to support developing countries. 'This amount is a lower limit which will be increased over time', stated the Minister.

With regard to the methodology, Carole Dieschbourg observed that at the beginning of the Paris Conference, many aspects of the agreement were vague and that the transition to negotiations at ministerial level during the second week enabled progress to be made. In that regard, the Minister welcomed the fact that the work was shared between the 28 EU Ministers for the Environment and hailed the 'joint effort' of Europeans, noting that it was made possible on the basis of a joint position and ' a good common mandate' set out prior to COP21. The Luxembourg Presidency of the Council of the EU ensured that the issue was discussed in all Council formations, she noted.

Among key factors to success, the Minister also hailed the work of France's Minister for Foreign Affairs, Laurent Fabius, who chaired the conference, and described him as being a 'great diplomat', as well as the setting up of thematic working groups. Likewise, the political willingness expressed by Heads of State and Government during the opening ceremony, the work of civil society and raising global awareness of the urgency of the fight against climate change were also factors of success, observed Carole Dieschbourg.

The work of the Luxembourg Presidency in the context of COP21 was to coordinate the work of 28 Member States, explained the Minister who stated that the 'unanimously' accepted 1.5 °C target had been put forward on the initiative of the Presidency in order 'to form alliances'. Such alliances thus made it possible to place pressure on the most reluctant countries.

Henceforth, the agreement can only enter into force once it has been ratified between 22 April 2016 and 22 April 2017 by 'at least 55 countries' accounting in total for 'at least 55 %' of global emissions and it is for the contracting parties to set out national action plans for 2050. In 2018, a first dialogue meeting among parties will be organised before the first periodic review scheduled for 2023.

When asked by a journalist, Carole Dieschbourg then stressed that the agreement reached was 'a good agreement but that it was not perfect', in so far as it had been necessary to reach a compromise between a number of States, in particular with regard to the periodic review cycle that the EU would have preferred to start earlier.

Likewise, the suggestions made by the EU were not always accepted, in particular with regard to the 'decarbonisation' of the economy. The final draft calls for global emissions to peak 'as soon as possible' and sets out the objective to strike 'a balance' between emissions from anthropogenic sources and their absorption by carbon sinks which the Minister believes is 'akin to carbon neutrality'. 'This amounts to wording things in a way which is considered acceptable by certain countries which cannot accept the term decarbonisation', she said.

Carole Dieschbourg then stressed that, for the EU, the most important factor was to establish a robust framework 'as legally binding as possible' with rules on transparency and to enable the revision of targets. 'We were aware of the fact that, as is the case at European level, a good framework allows for progress to be made', she concluded.