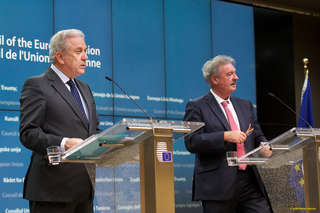 European Ministers of Home Affairs met in Brussels on 9 November 2015 for the extraordinary Justice and Home Affairs (JHA) Council devoted to the migration and refugee crisis in the EU. This meeting was convened by the Luxembourg Presidency to discuss the operational plan for the measures decided at European level in recent months - the relocation mechanism for 160,000 asylum seekers in the EU, the first reception facilities ('hotspots'), the return policy and relations with the countries of origin. In that regard, and faced with a mass influx of asylum seekers, the Presidency proposed the creation of 'processing centres' in addition to hotspots, in order to handle refugees and migrants on the rest of the migratory route, in particular for the Balkans.

As a reminder, the Council approved the two-stage emergency relocation from Italy and Greece of a total of 160,000 people seeking international protection, on a proposal from the European Commission. The relocation of 40,000 people was unanimously approved at the extraordinary Justice and Home Affairs Council (JHA) held on 14 September 2015, while the relocation of 120,000 more people was approved by qualified majority during the extraordinary JHA Council of 22 September 2015.

However, on the ground, the mechanism has barely been implemented (fewer than 150 refugees have so far been relocated, including 30 from Athens to Luxembourg at the beginning of November), while the influx of migrants to the EU remains high and forthcoming winter conditions create new fears. According to figures from the United Nations (UN), more than 750,000 refugees and migrants have already arrived in Europe since the beginning of the year and 600,000 more people are expected over the course of the next four months.

Hotspots must be granted the operational means they need, including in terms of reception capacities

'We don't have a lot of time. Some States will not be able to handle the burden for much longer', stressed the Minister of Foreign and European Affairs, Minister of Immigration and Asylum and President of the Council, Jean Asselborn, during the press conference after the meeting. According to the Minister, if the borders have to be closed for longer, 'the Schengen area would be seriously in danger', while a potential domino effect could have 'catastrophic consequences for the Balkans' if destination countries such as Germany or Sweden, which he named prior to the Council, are overwhelmed and close their borders. In that regard, the Ministers have also agreed to hold a debate during the December JHA Council on the functioning of the Schengen area and on the lessons learned from temporary reintroductions of border controls by certain Member States.

'It is essential to slow down the influx of people so that these can be better managed by individual Member States', he added, calling for an end to the 'open border' policy ('Durchwinken') for countries of entry, transit and reception. 'Europe must remain open, but an open Europe also means that the rules must be respected and that we must all cooperate to achieve this'.

In that regard, the Minister stressed that the hotspots in Italy and Greece should be operational as soon as possible and should therefore be granted the necessary means, especially in respect of temporary and long-term 'reception capacities' for which the EU has also made funds available to States, stated the Minister. This 'can only work if everyone plays their part', he said.

The Presidency proposes the creation of 'processing centres' in addition to hotspots, in order to handle refugees and migrants, especially for the Balkans

Moreover, the Minister held that the EU should 'do everything to avoid a humanitarian catastrophe as winter approaches' and that it is therefore necessary to prepare for all eventualities both within the EU and on its doorstep, referring to the Balkans. 'We cannot let people die in the sea or let them die of the cold in these countries', he said.

In that context, the Luxembourg Presidency considered a new concept; processing centres which can operate in similar way to hotspots along the rest of the migratory route. In situations of mass influx, hotspots would exceed their capacity to register all arrivals, stated Jean Asselborn. The Minister referred to the example of Greece registering up to 10,000 arrivals every day on the islands. 'It is illusory to request that Greece receives 10,000 persons per day and carries out screening, registration and the hearing', stated Jean Asselborn who takes the view that 'it is necessary to share the burden'.

The processing centres, which could be located all along the migratory route (except in front-line countries where hotspots have already been established) will receive migrants and initiate asylum applications or the return mechanism. Although the concept 'is still to be explored and defined', the idea is to be able, in situations of mass influx, to slow down the influx of people so that the number and identity of people en route can be better managed, stated Jean Asselborn who takes the view that the centres could be established both within and outside of the EU, in particular in the Balkans, but not in Turkey. With regard to 'processing centres' within the EU, the Minister held that it would be necessary to examine 'to what extent relocation from such centres would be possible', whereas in respect of processing centres outside of the EU, 'it would be necessary to consider a new legal concept somewhere in between relocation and resettlement'.

'What needs to be made clear is that nowhere along migratory routes can an "à la carte menu" be offered', added the Minister who stressed the fact that 'the same rights and obligations must be applied in respect of everyone, everywhere'.

Information campaign aimed at migrants and full activation of the IPCR

Ministers also discussed the problems resulting from the lack of cooperation displayed by some migrants, and the possible measures in response. Jean Asselborn observed in that regard that 'there are a number of possibilities in the acquis communautaire' which should be applied. The Minister believes that in all cases it is 'clear' that a migrant should not be granted asylum in the EU if he refuses to cooperate with the authorities. In addition, he reiterated that there is no entitlement to choose the final country of destination.

In that regard, the Ministers decided to initiate an information campaign aimed at migrants arriving into the EU. It is necessary to give clear information to migrants with regard to their obligations, rights and the possibilities that EU asylum law can offer them. 'We have often found that smugglers and traffickers are paid much more attention than the authorities', stated Jean Asselborn.

Jean Asselborn also observed that the Council had decided to engage the full activation mode of the IPCR (Integrated Political Crisis Response) so that roundtables will be convened regularly with all the relevant actors in order to increase policy coordination and response to the migration crisis. The measure was activated on 30 October by the Luxembourg Presidency in the 'information sharing' mode with the aim being to monitor the development of migratory flows and to support decision-making through the continuous sharing of information on the situation on the ground.

For Commissioner Avramopoulos, 'it is time to shift gears'

European Commissioner for Migration, Home Affairs and Citizenship, Dimitris Avramopoulos, stated that the atmosphere during this meeting of the Council had been 'much better' and focused on the progress made since the last JHA Council of 8 October, the Eastern Mediterranean - Western Balkans Route Conference on 8 October and the extraordinary meeting on the migrant crisis in Eastern Europe and along the Balkans route on 25 October 2015. He believes that the conclusions of the Council are clear and concise and that Member States have made concrete commitments. His conclusion: a 'stepping-up of efforts on all fronts'.

With regard to the implementation of the 17 point action plan of 25 October, the Commissioner stated that weekly Contact Point Video conferences are taking place and information on migrant flows is exchanged. The deployment of 400 police officers to Slovenia is also underway, with 113 agents already on the ground. The EU is counting on countries along the Balkans route to increase reception capacities to 100,000 places.

An important start has been made with regard to the 'hotspot' approach and the relocation system. The hotspot in Lampedusa is in place, the hotspot in Lesbos will be fully operational next week and the other hotspots envisaged in Greece will follow between now and the end of November. In the meantime, 147 people have already been relocated from Italy and Greece. But 'this is not enough. It is time to shift gears,', stated Dimitris Avramopoulos who believes that 'we need to move from the dozens to the hundreds if we want to make sure that this scheme will work properly'

Before the end of the year, the Commission will put forward a proposal to create a European Coastguard body. The Dublin system will also be subject to a revision in Spring 2016 and be replaced by a structural relocation mechanism. A common list of safe countries should also be established.

'No single country can solve the crisis alone', reiterated the Commissioner who stressed the importance in that regard of the Valletta Summit on migration on 11 and 12 November.