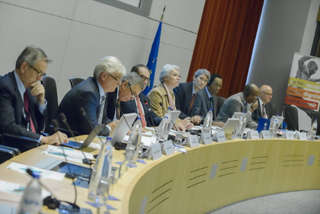 After a first day devoted to future development aid beyond 2015, the delegates at the International Conference on European Development Aid Policy organised by the European Court of Auditors, together with the Luxembourg Presidency of the Council of the European Union (EU), discussed the effectiveness of development aid and its monitoring on 21 October 2015 in Luxembourg.

With regard to this matter, Kristalina Georgieva intends, with this initiative, to carry out a fund allocation analysis for development aid. It will focus in particular on the beneficiaries, the way in which aid is allocated, its evaluation and on communication regarding results, Manfred Kraff stated, adding that this initiative will be based on the European added value, priorities, and respect for the rule of law.

"To achieve these goals, checks on Member-States and their reliability must be improved ", Manfred Kraff  pointed out, adding that an interinstitutional working group (Commission, European Parliament, Council and European Court of Auditors) was also necessary. "We wish to work with all institutions to define recommendations for the future", he said.

Manfred Kraff reminded those present that the EU and Member-States were the biggest donors for development aid at global level, and that EU funds had been earmarked for around 150 countries around the world, of which some have already helped to achieve robust economic growth and a reduction in poverty.

Referring to the 2015 United Nations report on the Millennium Development Goals (MDG), he pointed out that it had highlighted the fact that the number of people living in extreme poverty had fallen by over 50% since 1990. "We can therefore conclude that development aid has a positive economic impact", he emphasised.

Regarding the monitoring of development aid, the speaker pointed out that the Commission used a results-orientated monitoring system ("Results Oriented Monitoring System" - ROM), providing a snapshot of operations implementation. On-site analyses are carried out and a highly structured methodology is applied, he continued. At the same time, the Commission, EU delegations and the Court of Auditors monitor and check on-site projects, which enables them to react rapidly in case of deficiencies, he added.

Former head economist at the World Bank and professor emeritus at the Paris School of Economics, François Bourguignon, underlined the issue of development aid effectiveness, often widely questioned in academic circles and scientific literature. This issue hadn't been raised until relatively late, in the middle of the 1990s, shortly after the Cold War, the economist noted. "In other words, during an entire period, aid was in large measure a geopolitical instrument", he said.

Today, in a different context, the question of knowing how to compare and measure the effectiveness of aid and against what, always arises, he continued. For some, it is measured in terms of growth, for others in terms of reducing poverty, improving education, infrastructure or health. "It is evident that in order to measure the effectiveness of aid, different instruments are needed and that it is necessary to clearly distinguish what's going where  ", added François Bourguignon, who remarked on the difficulty in the matter, since aid requirements can be subject to modifications by recipient countries. "It is difficult to see exactly where the aid goes, and measuring its effectiveness would require precision".

According to the economist, proof of aid effectiveness can be sought on two levels, the first at the micro-economic level, which means studying the projects themselves. An exercise which François Bourguignon reckons is "complicated", whereas the question arises of knowing if the aggregation of several effective projects achieves a positive result at macro-economic level.  In addition, when the effectiveness of a project is measured, its secondary effects  "are often overlooked". For example, "if a project employs local people qualified for such tasks, these people are no longer available to undertake domestic projects".

As to the macro-economic level, François Bourguignon referred to the existence of a large number of studies and a "plethora of results". "Some point to a positive impact on certain indicators, others are less than conclusive", he pointed out, but what these studies do highlight is "an enormous difficulty in handling the issue of causality", therefore resulting in "considerable ambiguity".

Furthermore, the economist reiterated the constraints which affect aid effectiveness, the first being the bi-lateral character of this aid, granted from state to state. "If the aim is to reduce poverty, there is an intermediary between the funder and the impoverished target population, which is the government of the beneficiary country", stated François Bourguignon, noting that if said government doesn't have the best of intentions, there are aid leaks.

Another constraint is on conditions attached to aid. The economist believes that "very often there is a lack of credibility" on the part of the donors that face the "Good Samaritan dilemma". In effect, if results have not been achieved and the donor has to decide whether to stop the aid or not, often concern about the poor prevails and the aid continues, he stated. "It's a major problem", he added, underlining that if the beneficiary country expects this behaviour, it has no reason to respect terms and conditions. Furthermore, there is a coordination problem between the fund donors, even some competition between them, François Bourguignon went on.

Lastly, the economist noted that monitoring the different projects and their evaluation is costly and therefore requires the allocation of resources which are not however "always budgeted for".

According to François Bourguignon, these different difficulties have prompted donor countries to emphasise the importance of good governance in beneficiary countries, thereby providing some reassurance to fund donors on how the aid is used and that the funds will not be embezzled. Governance is furthermore the dominant component when allocating aid from the World Bank, he said, but that it was "measured in a relatively fluid way".

A major problem with this trend is that "badly governed" countries are granted less or no aid, when it is often those countries which suffer from the worst poverty. Therefore, the question arises of knowing how to treat these so-called fragile States "and it is one that has not been resolved", the economist pointed out.

Within this context, François Bourguignon pointed out a criticism against development aid, accused by some of contributing negatively towards a country's quality of governance. According to these theories, beneficiary governments would no longer need to rely on their citizens to generate public resources, so these governments are not answerable to their citizens. "According to this argument, aid allows governments that are unconcerned about the development of their population to maintain their grip on power, via corruption or cronyism", he said, stressing the lack of supportive empirical evidence. He concluded by referring to the need for more empirical evidence in this area, where until now the approaches have been "too crude".