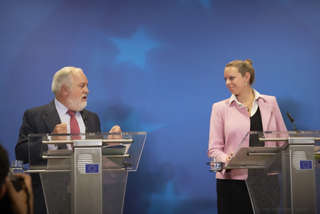 The EU's Environment Ministers adopted conclusions at a Council which took place September 18, 2015 in Brussels on the EU's mandate for the UN Conference on Climate Change to be held in Paris at the end of the year. These conclusions set out the main elements of the EU's position for the 21st session of the Conference of Parties (COP21)to the UN Framework Convention on Climate Change (UNFCCC), whose goal is to find a global agreement from 2020 to replace the Kyoto Protocol in order to maintain global warming below 2°C.

The mandate stresses the importance of an " ambitious and durable legally binding agreement  in Paris" applicable "to all Parties " and which addresses in a "balanced and cost-effective manner" the mitigation, adaptation, finance, technology development and transfer, capacity-building or transparency of actions and support. He insists that the Paris conference is a "historical step" to encourage "a collective global action " and to speed up a "global transition to a low green house gas and climate resilient society ".

In the third paragraph, the text mentions a "long-term vision of "global and sustainable climate neutrality and a resilience to climate change in the second half of this century ". At a press conference after the Council, Carole Dieschbourg, the Luxembourg Minister who chaired the Council, said in response to a reporter that the term "de-carbonization which was stated in the declarations of the G7, has not been included in this paragraph because of opposition from Poland. According to her, the terms "climate neutrality" and "sustainable" also enable going further than the simple term   " de-carbonization " because all emissions are covered.

Thetext calls for a reduction in greenhouse gas emissions by 50% by 2050 and to achieve zero emissions by 2100 (paragraph 3).

According to Carole Dieschbourg, the mandate will allow the EU to "show leadership"

Carole Dieschbourg welcomed a "balanced" agreement . The Council reached an agreement on a " strong, ambitious and responsible " European mandate that will allow the European Union (EU) to " show leadership " and to " facilitate a global agreement that is acceptable to all ", she said. " It is our responsibility to achieve a positive result in Paris and speak with one strong voice ", insisted the minister.

She said there is a " commitment that shows the way forward to reach a long-term vision of the transformation needed for a sustainable society resilient to climate change " and pave the way for an ambitious, robust and dynamic agreement ". For the first time, the EU " reflects the objective to stay below 2°C in an operational language in announcing clearly to investors and the economy that transition to a world resilient to climate change is unavoidable ", she specified.

The European Commissioner for Energy and Climate, Miguel Arias Cañete, for his part, said the EU is not ready to " sign any agreement ". According to him, the common objectives adopted by the ENVI Council are " ambitious and realistic ".

The Commissioner also welcomed the adoption of a position on a long-term goal, which is according to him " one of the EU's key demands for Paris ". This objective, " conforms to the recent conclusions of the Intergovernmental Panel on Climate Change (IPCC) ", according to him this will ensure that " we are working together towards the same goal ".

Miguel Arias Cañete has also pointed to the fact that the contributions to be presented in Paris will not be sufficient to achieve the objective of 2°C. "This is why the Commission and Morocco, the next Presidency of the climate negotiations, have organised a International Forum on October 12 and 13 in Rabat, to conduct a comprehensive assessment of the situation in  which we find ourselves".

In the 10th paragraph, the mandate emphasizes the need to ensure in the Paris agreement that all parties have an emission " mitigation ambition mechanism " which must be " maintained and implemented ". It also requires that this mechanism is " dynamic " and that Parties are obliged to submit new commitments every five years, without diminishing their commitments or resubmit old ones.

For Carole Dieschbourg this will enable having " clear review cycles  " that will help bridge the gap between short-term reduction targets and the long-term objective " to encourage further ambitions over time ". She welcomed the fact that through this paragraph, the EU supports the " legally binding commitments ".

According to Miguel Arias Cañete, it is a "key asset of the EU for Paris". "Every 5 years the countries would examine the situation, and could strengthen the objectives for emissions in the light of the recent scientific developments ", he said.

In the 14th paragraph, the mandate insists on the determination of the EU and its Member States to mobilize, from 2020, 100 billion US dollars annually from public and private sources to support the reduction of emissions in developing countries and adaptation measures whose importance is underlined in the 11th paragraph.

The Minister, Carole Dieschbourg, saw it as "encouraging " that more than 62 countries worldwide, covering nearly 70% of global emissions, have previously submitted their intended nationally determined contributions- INDCs to the UNFCCC. " This is much more than under the Kyoto Protocol, which had only covered 14% of emissions ", she recalled, calling on those who still have not submitted to do so. This appeal is also part of the mandate.

Miguel Arias Cañete for his part, welcomed " real progress ", because in addition to the targets, it is the first time that these countries have "set up comprehensive climate strategies at the highest political level ". However, he regretted that " several major G20 economies " have not yet announced " their intention to contribute to this effort ".

As a reminder, the EU presented its INDC in March 2015. It is based on the conclusions of the European Council of October 2014, at which Heads of State and Government reached an agreement on the framework of the European Union's climate and energy to 2030 and approved an at least 40% domestic reduction in greenhousegas emissions by 2030, compared to 1990.

A reform of the emissions trading system of quotas adopted

The ministers also formally reformed the emissions trading system of the greenhouse gas economies(ETS), according to a statement  of the Council. Proposed by the European Commission in January 2014, the reform aims to create a stability reserve by withdrawing from the market 12% of quotas, in case of surplus, to reintroduce them when needed. The goal is to fight against the structural imbalances between supply and demand caused by an emission surplus quota accumulated since 2009. The European Parliament and the Council reached an agreement in a trialogue in May 2015 that the reserve will come into force on January 1, 2019, not in 2021, as the Commission had proposed. The agreement, based on a consolidated text was approved by COREPER May 13, 2015.