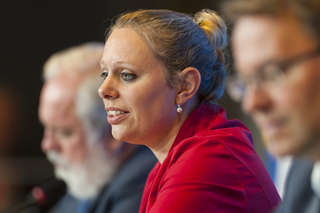 EU Ministers for the Environment met in Luxembourg on 22 and 23 July 2015 for an informal meeting chaired by Carole Dieschbourg, Luxembourg's Minister for the Environment. They discussed the Sustainable Development Goals (SDG) which will be adopted in September 2015 at a UN Summit in New York and the state of play of climate negotiations in view of an ambitious Paris agreement.

Ministers agreed that these SDGs are "a challenge and an opportunity for the international and the European level leading towards a more sustainable, equitable and coherent policy making", declared Carole Dieschbourg, Minister for the Environment and currently President of the Council.

Ministers agreed that the EU should show its leadership in the implementation of the environmental aspects of the SDGs. "These goals are a tool to strengthen European environmental policies. SDGs are a reality check for our policies: Implementing the SDGs in the EU means that Environment needs to stay high on the agenda and has to be mainstreamed into other policies", said Carole Dieschbourg.

The UN Summit in September, addressing poverty eradication and sustainable development, will also be an "important step" towards the Paris climate agreement which shall be adopted at the Conference of the Parties to the United Nations Framework Convention on Climate Change (COP21), insisted the Minister.

Road to Paris Agreement: Political progress needs to be taken up by negotiators

Ministers addressed the state of play of the climate negotiations after the last round of UN negotiations in June, the last Major Economies Forum on Energy and Climate Change (MEF), co-chaired and hosted by Luxembourg and the Paris ministerial informal consultations. They assessed the progress towards an ambitious Paris agreement and discussed the next steps to accelerate negotiations and find convergent positions with other countries. The Environment Council will adopt conclusions on 18 September 2015.

Convergence on several issues is starting to emerge, for instance in the field of adaptation to the effects of climate change, an issue of particular importance for developing countries, explained Carole Dieschbourg. Ministers highlighted that this momentum needs to be captured by the negotiators, who start their next round of discussions at the end of August in Bonn. "Time is getting short towards Paris. Negotiators must follow their ministers' lead and give us soon, and not later than in October, a shorter text limited to the main political options", stated the Minister.

European Commissioner for Climate Action and Energy, Miguel Arias Cañete, explained that "although progress in the negotiations is quite slow at a technical level, there is a growing political will to reach an agreement in Paris". He reported that a "step forward" had been made with regard to the Kyoto Protocol, pointing out that only 31 countries (accounting for 13 % of global emissions) had participated in the second commitment period of the protocol. As for the Paris agreement, 46 countries in addition to the EU have already expressed their intended nationally determined contribution (INDC), which accounts for 56 % of global emissions.

Emerging countries such as Brazil, Columbia and Indonesia should pledge their contribution over the coming weeks, stated Miguel Arias Cañete, who urged all other countries to express their INDC "without further delay". "We must not fail", he insisted, urging those countries "to step out of their comfort zone". "Progress will also depend on the divisions, indeed confrontations, between developed and developing countries", he concluded.

Financing the fight against climate change: instruments to build trust

Environment Ministers also worked on how to finance the transition to economies with low greenhouse gas emissions and resilient to climate change.

Carole Dieschbourg pointed out that, globally, the EU is the largest single contributor to climate finance. "For example, we provide almost half of the funding to the Green Climate Fund and, in 2013, climate finance from the EU and its Member States for developing countries amounted to more than EUR 9.5 billion", stated the Minister.

Ministers of the Economic and Financial Affairs Council (ECOFIN) will discuss climate finance during their informal session in September and will also adopt conclusions on climate finance at a formal Council in November ahead of the Paris Climate Conference.

Putting the ETS on the right track

During the meeting, the Commissioner presented the new proposal on how to reform the EU Emissions Trading System (EU ETS) to the Ministers, put forward by the European Commission on 15 July 2015. There will be an initial exchange of views on the Commission proposal by Ministers during the next meeting of the Environment Council in October.

According to Miguel Arias Cañete, this proposal falls within the framework for climate and energy policies established by the conclusions of the European Council of October 2014. A centre-piece of the framework is the binding target to reduce EU domestic greenhouse gas emissions by at least 40 % by 2030, in particular through a 2.2 % reduction per year in the maximum permitted emission levels under the EU ETS from 2021, which equates to a reduction by 556 million tonnes over the course of a decade, according to the Commissioner. Miguel Arias Cañete also stressed the importance of preventing the relocation of industries.