On 15 December 2015, Camille Gira, Secretary of State for Sustainable Development and Infrastructure, addressed the European Parliament"s plenary session in Strasbourg, on behalf of the Luxembourg Presidency of the Council of the EU, on the results of COP21, the United Nations conference on climate change held in Paris from 29 November to 12 December 2015. An agreement was adopted by 196 parties, which sets, from 2020, a universal binding framework designed to limit the global rise in temperatures. Camille Gira spoke of a "historic achievement" and an agreement that took "a great step forward", while calling for the framework to be set out in more detail in the months and years ahead. 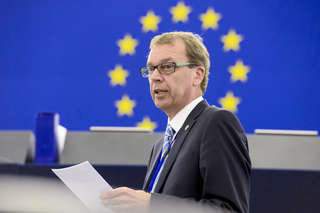 The Secretary of State welcomed an agreement which was "the fruit of unprecedented political will" and a "historic achievement". He said that it constituted the adoption, for the first time, of a "universal agreement on climate containing the structure required to keep global warming well below two degrees and in which all the countries of the world undertake to do their part".

Camille Gira made a point of congratulating "the French presidency on its exceptional performance" in terms of its "patience", its "irreproachable impartiality" and its "control of the situation", which had enabled it to present "an agreement which has not only achieved consensus but which is both ambitious and sustainable". Similarly, he welcomed the "determination of the parties to move forward", stressing that they had "always showed the way by adopting and arguing for an ambitious position". Camille Gira then spoke about the "performance of the European Union" which "spoke in one voice", thus becoming a "vital partner in the negotiations".

On the agreement, Camille Gira said that the parties had agreed to keep global warming "well below 2°C" and would even attempt to "limit it to 1.5°C".

He explained that, under the agreement, all the parties must communicate the national contribution to emissions reduction and revise it upwards every five years.

The Paris agreement also contains some very important elements for developing countries, and particularly for the poorest and most vulnerable among them, added Camille Gira. In this context, he referred to adaptation, losses and damage, capacity-building and financing.

With regard to financing, the developed countries have undertaken to produce a concrete road map to achieve USD 100 billion by 2020, and a new more ambitious target must be set by 2025, said the Secretary of State, noting that the parties had agreed on a transparent framework that is designed to "create the necessary confidence that all the countries will do what they have promised".

"The Paris agreement is a great step forward", concluded Camille Gira, saying that it is, in fact, the "first climate agreement with a global scope, sending the signal that the transition to a low CO2 emissions economy is becoming inevitable". In his view, however, there is still "much more work to be done" and now the framework of the agreement needs to be set out in more detail in several areas.

Miguel Arias Cañete, European Commissioner for Climate Action and Energy, welcomed this "historic moment". Thanks in large part to the EU"s efforts, the world had its "first universal and legally binding agreement on climate". In the Commissioner's view, a new chapter has been opened, since this is an action that has been taken "by all", not, as in the past, an action by just some countries. The agreement showed that "multilateralism can still work" in the face of a global challenge.

He thanked the French, who chaired COP21, for their "remarkable work", stressing that the EU had always spoken with one voice thanks to the efforts of the Luxembourg Presidency of the Council of the EU. The agreement also sent a signal to investors, businesses and political decision-makers that the global transition to clean energy would be a lasting one. The debate was not dominated by conflict between developed and developing countries, as had been the case in Copenhagen, but by the opposition between the "willing" and the "unwilling".

Miguel Arias Cañete stressed that the agreement would make a rapid transition from fossil fuels to "clean" energy, and said that "this trend is irreversible". The European Commission welcomed the fact that the agreement acknowledges the need to continue efforts to limit the temperature increase to 1.5 degrees, "which was a crucial element of our alliance". He also stressed the importance of the "robust" mechanism for regular reviews (every five years) in order to ensure that the states are keeping their promises. The Commissioner recognised that "the hard work starts now", and announced that the Commission will put forward legislative proposals relating to the sectors not covered by the EU Emissions Trading System (ETS).

During the debate, MEP Giovanni La Via (PPE) welcomed the "historic outcome", since all the Member States had recognised that this was a global problem which required a global solution, at a time when an agreement had seemed impossible. In his view, the agreement was historic because it took into account the needs of each country.

Kathleen Van Brempt (S&D) praised this first universal agreement on climate, signed by practically all states, including the developed countries and the emerging markets. However, she took the view that more work would be required, and called on the Commissioner not to wait too long, because, in her opinion, even more ambitious undertakings were necessary to achieve a decarbonised economy.

MEP Ian Duncan (ECR), who spoke on behalf of the conservatives in his group, welcomed this "major step forward", but he also wondered about the consequences the agreement would have on the policies in force on climate and energy, as well as on the ETS.

Gerben-Jan Gerbrandy (ALDE) considered that the agreement sent an important signal to the financial world that only carbon-free solutions would be profitable. He thanked the Luxembourg Minister for the Environment for her commitment to building bridges between the developed and developing countries. The MEP also called for monitoring to ensure that the states comply with their commitments.

Anne-Marie Mineur (GUE/NGL) lamented the fact that the air and maritime transport sectors had not been included in the agreement and considered that industry had imposed its views. She called for more ambitious commitments, particularly with regard to the CO2 emissions reduction targets for 2020 and 2030.

Yannick Jadot (Greens) congratulated the French, who chaired COP21, for having succeeded in obtaining "a unanimous agreement". He said, however, that if the world wished to achieve the 1.5 degree target, it would have to move away from carbon and fossil fuel energy "very quickly". In his view, Paris" failure was the fact that, under pressure by the oil-producing countries, decarbonisation had not been included in the agreement, and some sectors were avoiding their climate responsibilities. He welcomed the "new, broader governance" of climate policies, but criticised the "soft law" which does not have the capacity to force states to keep their promises.

Marco Affronte (EFDD) also welcomed the "historic agreement", while condemning the disappearance of the term "decarbonisation" from the text, which instead refers to a "market free of carbon".

Responding to the MEPs, Camille Gira explained that "we are not 100% satisfied", but that it was very difficult to find agreement between 196 parties. "We battled to the end to include the air and maritime transport sectors, but the opposition was too strong", he said, lamenting the fact that the agreement did not include a specific target for 2050. In his view, Europeans had played a very important role in Paris, in contrast to the meetings in Copenhagen and Lima, where the EU had been "neither visible nor audible". Through its ambitious approach, the EU had "showed others the way", concluded Camille Gira.

Miguel Arias Cañete confirmed that this was a historic agreement, because it covered over 95% of global emissions, and had been signed by the largest CO2 emitters, including the United States. While the agreement was "not perfect", it constituted a "solid foundation", said the Commissioner. As for the nature of the agreement, he made it clear that "all the elements in the agreement are binding", and that all the parties had a legal obligation to commit to reducing their emissions. However, if the agreement had included strictly binding commitments, the United States would not have signed it, he explained.