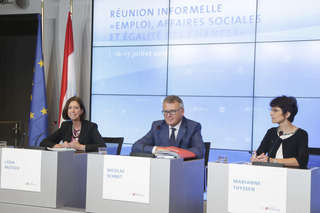 During an Informal Ministerial Meeting on 17 July 2015 entitled "Changes in the Labour Market: a challenge for men and women", the Ministers for Gender Equality and Employment exchanged strategies to better meet the needs of men and women for greater balance between work and family life. The Commission announced that it will present a proposal for a revised directive on maternity leave, in so far it has withdrawn its earlier proposal of 2008 in the context of its "Better Regulation" programme.

At the press conference following the meeting, Luxembourg's Minister for Equal Opportunities, Lydia Mutsch, explained that discussions had made it possible to focus on a new division of responsibilities between men and women in professional, private and family life. "It is necessary to create conditions to better reconcile" professional, private and family life for both men and women, insisted the Minister. She welcomed the fact that the meeting brought Ministers for Equality and Employment together, highlighting the importance of the link between employment and equal opportunities and the need to foster a multidisciplinary approach.

According to the Minister, increased participation of women in the labour market and in economic and political decision-making is a "key priority" of the EU's policy on equality. These two items are priorities of the Presidency in this field, alongside with promoting the principle of "Gender Mainstreaming" in the context of different EU policies and institutions.

The Minister further stressed the importance of involving men in the policy on equality between men and women. "It is necessary that our policies on equality concern not only women but also focus on men", she insisted. "The principle of Gender Mainstreaming must consistently combine the specific perspectives of men and women", she explained and added that "men must also be regarded as actors likely to make claims with regard to equality, as is already the case with men who wish to devote more time to their private lives".

Marianne Thyssen, European Commissioner for Employment, Social Affairs, Skills and Labour Mobility, explained that the European Commission is "committed" to supporting the integration of women into the labour market as a "necessity for both society and the economy". "The ultimate goal is to create an environment in which men and women can provide for their families without having to give up their careers", she insisted. She noted that the division of paid work and unpaid work remains "unequal" between men and women. This "has an impact on their careers, salaries, and pensions, and exposes them to a higher risk of poverty", she observed.

Furthermore, the Commissioner announced that the Commission will present a proposal for a revised directive on maternity leave which "will take account of changes in society over the past decade" and which will be "better adapted to the 21st century". The earlier proposal of 2008 has been withdrawn by the Commission in the context of its "Better Regulation" programme. The proposal planned to extend the period of maternity leave from 14 to 18 weeks. In 2010, the European Parliament advocated for 20 weeks' maternity leave, but since then the matter was blocked at Council level. "The Council found that there was no way to make progress", stated Marianne Thyssen, who believes that it is necessary to "make the most of the withdrawal of this proposal". She further stressed the need to involve the social partners in the debate.

The Minister for Labour, Nicolas Schmit, highlighted the "considerable differences" in employment rates between men and women which vary from 44% (Greece) to 77.6% (Sweden). In 2014, the employment rate of women in the EU was 63.5% compared to 75% for men, according to Eurostat. The Minister believes that it is not simply a debate on "value" but is also an "economic" debate. "Increased equality will benefit the labour market, the economy and companies because they will function more effectively", he stressed, observing that "equality is as much a problem for men as for women, and not just for women alone". He called for this matter to be included in the revision of the Europe 2020 Growth Strategy, of which one of the five objectives is an employment rate of 75%.