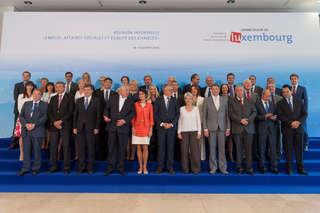 European Union (EU) Ministers for Labour and Social Affairs met in Luxembourg on 16 July 2015 for an informal meeting on issues relating to Employment, Social Affairs and Equal Opportunities. After focusing, in the first instance, on the social dimension of EU governance, the Ministers discussed the issue of youth employment over a working lunch with social partners and then during a session with their counterparts from Algeria, Morocco and Tunisia. As the Minister for Labour, Employment and the Social and Solidarity Economy, Nicolas Schmit, chaired these meetings.

It is necessary to improve existing tools and to go even further in the fight against youth unemployment, advocated Nicolas Schmit

During the press conference held after the meeting, Nicolas Schmit emphasised that the working lunch devoted to youth employment had been "very intense" and that, "for once, it had allowed young people to join in" on the discussions thanks to the presence of the President of the European Youth Forum. "We are very aware of the fact that youth employment, or rather youth unemployment, in Europe is still an issue" with nearly 5 million young people affected in the EU, the Luxembourgish Minister explained with regret.

Although it has been seen that the various initiatives set up over the past few years to fight this reality, in particular the recommendation of a Youth Guarantee adopted by the Council in April 2013, have started "to bear fruit", he noted that in some countries, the situation continues to be "a matter for concern". "In Greece, behind the debt figures, it has been forgotten that more than 50 % of young people are unemployed, and that some of them are 'long-term unemployed'", continued the Minister, who deemed that the "EU and Member States absolutely have to respond to this challenge".

According to Nicolas Schmit, this involves improving existing tools, including the Youth Guarantee, in the first instance, but also requires "going further". The Minister revealed that discussions had therefore addressed the question of job creation, as well as the issue of investment, especially in skills and qualifications of young people which are considered to be "the key to high-quality jobs".

The joint meeting with Employment Ministers from the Maghreb which followed, also discussed youth employment, in so far as "hundreds of thousands, even millions of young people" in Algeria, Morocco and Tunisia are also experiencing "difficult situations" and are unable to find work, including those who have been trained.

In this context, during the meeting, the Luxembourg Presidency submitted a proposal for youth employment through vocational training in the Maghreb countries. "We wanted to underline our wish to reinforce our partnership with our southern Mediterranean neighbours", explained Nicolas Schmit, who revealed that "their problems, which are often similar to those in the EU, are also our problems". "We share their concern for stability and security, and their desire for economic and social development", explained the Minister, who hailed the efforts made in these three countries to "open up new prospects for young people".

According to the Minister, the EU's message to young people in Europe and the southern Mediterranean is one of hope and a guarantee that "we really want to work with concrete initiatives and projects". It is important that young people "feel that the EU has not forgotten them" by working together to "make real improvements to their situation and to offer them a genuine prospect of work and training", explained Nicolas Schmit.

In concrete terms, the youth employment initiative is based on a complementary approach to the efforts already made in the three countries in question. It focuses on investment in qualifications and skills in order, in particular, to find a better match between job offers and demand.

In response to a question from a journalist, Nicolas Schmit specified that, in Europe, there was a problem with regard to the qualifications and skills of many young people, as well as a certain incompatibility between training courses and the jobs available on the labour market. In the Maghreb, although many young people are qualified, there is a similar problem because "their qualifications do not correspond to economic needs and the labour market". On this matter, the Minister underlined a phenomenon of depreciation of technical and practical training courses, deemed to be "failures", as much in the EU as in the Maghreb, despite the fact that, with these courses, "doors are often easier to open", explained the Minister.

The project will therefore seek, in particular, to improve vocational training systems, identify training needs, better define the skills and profiles required for different professions, and to improve skills. The aim is also, and above all, to create new cooperation networks for the exchange of good practices between European institutions and centers working in this field and those in the Maghreb countries, with a view to effectively improving "the employability of young people" in these countries and in Europe, outlined the Minister.

For Nicolas Schmit, the approach is similar to that of many existing initiatives which aim to train young people, identify the skills they need to acquire, and to offer them the chance to do so within a company. "We want to codify and develop the existing model and also to mobilise stakeholders in other countries", explained the Minister, who pointed out that the project used a bottom-up approach based on proposals from stakeholders. Technical work will start very quickly with a view to the initiative being launched before the end of the Luxembourg Presidency.

The European Commissioner for Employment, Social Affairs, Skills and Labour Mobility, Marianne Thyssen, agreed that youth unemployment was one of the "most urgent" challenges on both sides of the Mediterranean and that the Presidency's initiative was most welcome. The Commissioner explained that the EU was already working closely with authorities in the Maghreb States in order to promote qualifying training courses and that, in this context, major financial resources were being mobilised.

The three Maghreb country Ministers hailed the Luxembourgish initiative, as well as the discussion held on the matter. The Algerian Minister of Labour, Employment and Social Security, Mohamed El-Ghazi, believes that "young people around the world are the same and experience the same problem, that of employment". However, there is no "uniform solution" which characterises each country, he continued, noting that each one had "its own experiences" and that, as a result, exchanges of information were extremely important.

The Moroccan Minister of Employment and Social Affairs, Abdeslam Seddiki, also hailed this meeting of "prime importance" on a subject "which could not be more strategic" in view of the reality of the interdependence of problems in the EU and the Maghreb. Recognising that there is no "magic recipe" for solving the matter, the Minister hailed this Luxembourgish initiative "which reflects a spirit of solidarity".

The Tunisian Minster of Vocational Training and Employment, Zied Ladhari, hopes to continue working together so that young people in the Maghreb "have other prospects and can avoid the inevitable temptation of radicalisation and illegal immigration". "With this initiative, Europe will send a powerful signal which shows that it is interested in young people in the Maghreb and that it is aware of the gravity of the situation and the importance of this challenge on which the peace, stability and prosperity of the entire region depends".