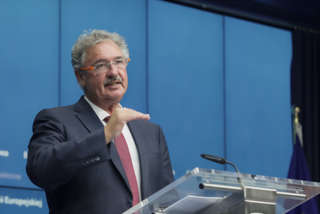 At an extraordinary Council meeting on 20 July 2015, chaired by Jean Asselborn, the Luxembourg Minister for Immigration and Asylum, the Ministers for Justice and Home Affairs (JHA) of the EU Member States reached consensus on the distribution of asylum seekers in the Member States. This formal Council was called after an informal meeting of the same ministers on 9 July 2015 in Luxembourg which enabled an agreement to be reached on resettlement, but not on relocation.

The Ministers adopted a general approach for 32,256 refugees to be welcomed under the temporary relocation procedure which was proposed by the European Commission in its Agenda on Migration in May 2015. The procedure provides for the relocation of 40,000 migrants eligible for refugee status who are currently in Greece and Italy. The European Council of 25 June 2015 had confirmed this goal and upheld that the relocation would be carried out on a voluntary basis.

Furthermore, the Ministers adopted the conclusions which anticipate the resettlement of 22,504 refugees from outside European territory, in accordance with the other part of the Agenda which initially was foreseen for 20,000 people.

In total, 54,760 refugees will be distributed within the EU Member States, according to a table published by the Council.

The Council "managed to reach the numbers" of 20,000 people to cover the first year of the relocation procedure, which extends over two years, said Jean Asselborn during the press conference that followed the meeting. He spoke of a "rather respectable result". "The Luxembourgish Presidency achieved this work in record time and we are close to the goal", he added.

He felt that "more efforts are still necessary" to cover the 2nd year of the procedure, but that the figure of 12,000 people had already been reached and that he was "committed to completing the pledging exercise", i.e. national contributions, before the end of the year. According to him, the figures are "sometimes encouraging, sometimes disappointing, at times embarrassing, less so for the European Union than for certain Member States". "Placing European solidarity on a voluntary basis clearly has its limits", he added.

"The intention of the Luxembourg Presidency today was to reach a figure of 60,000 people", in accordance with the goal set by the European Council meeting in June, Jean Asselborn pointed out, while welcoming the fact that the first round of relocation could begin in October. According to the Minister, this is "the most important result of this day" and the "fruit of important work which was done during the past weeks by the Luxembourg Presidency".

"I remember the last hours in which the European Union and its Member States clearly showed their willingness to confront together the challenge posed by the pressure of migration on Europe", the Minister stated.

On the other hand, Greece and Italy are committed to proceeding with registration and the systematic taking of digital fingerprints, explained the Minister. He stated that in order to "recognise" the work of these States, the setting up of reception and first reception facilites (called hotspots) is foreseen, and he welcomed the fact that the practical implementation work may begin immediately.

In the "hotspots", EASO, Frontex, Europol and the authorities of the Member State in question may "quickly proceed" with identifying, registering and taking the digital fingerprints of arriving migrants. Frontex can help to proceed more rapidly with returning those not in need of international protection, the Minister added.

This day's "extraordinary" decisions "allow to bring some order over uncontrolled relocation", a "risk which puts a strain on the Schengen system", the Minister explained.

Relocation and resettlement concerns people from different nationalities for which the recognition rate of asylum applications at first instance in the EU is currently equal to or greater than 75%, such as Syria, Eritrea, Iraq or Somalia, Jean Asselborn pointed out.

The procedure for relocation must now be passed by the European Parliament which next meets in September, and which will pave the way for formal adoption, the Minister stated.

The EU Commissioner in charge of Migration, Interior Affairs and Citizenship, Dimítris Avramópoulos, believed for his part that with this Council meeting, EU migrations policy had made "a great step forward", from "promises to actions". He congratulated Jean Asselborn on the way in which he chaired the debates and helped to achieve results. He also regretted that the goal of resettling 40,000 people had not been achieved, which showed that the "voluntary scheme is difficult to implement". He stressed the Commission's preference for a "fix" system for the redistribution of people to be relocated and resettled based on clear rules, and also recalled that "solidarity in the EU is, at the same time, a moral, legal and political commitment ."

The Ministers also adopted conclusions on designating certain third countries as safe countries of origin under the Directive on Asylum Procedures. This directive enables Member States to designate safe countries of origin for the purpose of accelerating examination of applications for international protection and defines common criteria and procedures to be followed for such designation.

These conclusions may serve as "a deterrent regarding asylum tourism", which "tends to clog up our administrations to the point of preventing them from focusing on those people who should urgently be able to benefit from international protection", Minister Jean Asselborn repeated.

According to an information note sent on 15 July 2015 by the Commissioner Dimítris Avramópoulos to the delegations, reinforcing the concept of safe countries has become necessary to allow for "the accelaration of return procedures for people whose demand for [international protection] has been rejected". The memorandum states that there is "currently no legal basis for adopting a common binding list at European level", since the Directive on Asylum Procedures does not give this power to the Council and European Parliament, but leaves it up to the Member States.