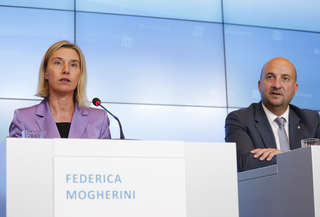 Co-chaired by Luxembourg's Minister of Defence, Etienne Schneider, and the High Representative of the European Union for Foreign Affairs and Security Policy, Federica Mogherini, an informal meeting of the Ministers of Defense of the European Union (EU) was held in Luxembourg on 2 and 3 September 2015. The first session focused on the results and implementation of the conclusions of the European Council in June 2015. The second session addressed current CSDP operations (Common Security and Defence Policy) and, in particular, the EUNAVFOR MED naval operation, launched in July 2015 to combat human traffickers in the Mediterranean. NATO and UN representatives were also present at the meeting.

In the first working session, Ministers welcomed the ongoing work to set out an overall EU strategy on foreign policy and security, stated Etienne Schneider. In particular, they underlined the importance of defence and the CSDP in the new strategy, whilst agreeing on the fact that strengthening EU capacity should remain a priority. "Continued investment in our defence capabilities is needed: we must spend more, spend more wisely and, above all, work together through closer cooperation with Member States, thereby avoiding duplication of effort", stated Etienne Schneider.

Ministers also addressed hybrid threats, "a major challenge" shared with NATO, and will continue to discuss, from now until the end of the year, concrete guidelines on action, noted Etienne Schneider. They also called for "concrete steps" to be taken in strengthening support capabilities to third countries to help them assume responsibility for their own security. In that regard, Ministers referred to the launch of concrete "Train & Equip" policies.

Lastly, the first session addressed the need for "more intensive" cooperation between NATO and the EU. Ministers also discussed strengthening cooperation between the EU and the UN, for example through the deployment of battle groups, noted Etienne Schneider.

The second session, chaired by Federica Mogherini, accordingly focused on the last EU CSDP operation, EUNAVFOR MED, in respect of which the High Representative called for the launch of the second phase of the operation.

Stating that the operation in the Mediterranean "is vital to our strategy", she underlined the fact that it had already contributed to saving some 1,500 lives at sea, which alone is of "inestimable value" and "a reason to be proud, whereas Europeans have not had much to be proud of in recent months with regard to the refugee crisis". She added: "When the EU comes together and acts quickly, with strong and real support of the Member States, we start to see results".

Highlighting the fact that EUNAVFOR reached full operational capability within four weeks and that it has since "fulfilled all the military objectives of the first phase", notably the gathering of information and intelligence on human trafficking and smuggling networks, Federica Mogherini called for the launch of the second phase of the operation which provides for the search and, if necessary, seizure of vessels used by smugglers and to apprehend and prosecute them. "The information collected during the first phase has shown that on at least sixteen occasions in the past five weeks, we could have prosecuted traffickers. Entering the next phase would allow us to take effective action whilst operating on the high seas".

European warships operate only on the high seas, however, and cannot enter Libyan waters without a Resolution from the Security Council of the UN or permission from the national authorities of Libya, a country in which two governments are vying for power. "It was decided at the outset that we would act in accordance with international law. This means that we will operate in international waters", she added. 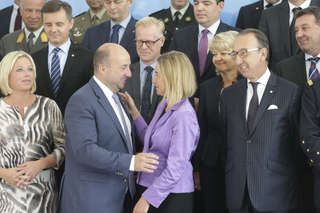 The High Representative also stressed that the decision should be formally adopted by the Member States in the Council. While she noted "a broad consensus" among Ministers of Defence on the need to launch the second phase, she expressed hope that it would lead to a decision being made "in the forthcoming weeks, not months". "The Ministers of Defence have demonstrated a high level of understanding of the need for urgent action and for working together", she continued, saying that she hopes it will be similar when the time comes to take decisions in other Council formations. "We cannot tackle this unprecedented situation alone, whether that means a Member State acting alone or by adopting a single internal or external policy. We need a package of measures and, above all, we need Europe to act quickly and with unity and a sense of responsibility", she stressed.

Federica Mogherini will therefore sound out the opinion of Ministers of Foreign Affairs in that regard at their informal meeting to be held in Luxembourg on 4 and 5 September 2015, she announced. That meeting will largely address working together with countries of transit and origin, and the prevention and resolution of the crises "that have developed around us, in particular the Libyan crisis". "These are the key elements to the puzzle which will help to significantly reduce the flow of people and especially the tragic situation of the men, women and children in question", she added. And remember, referring to a photograph published in the media of a dead child lying drowned on a beach, that "even without these images, such tragic events are happening". "Our job is not to express regret or to observe minutes of silence but to make decisions" and to "ensure that they result in concrete action", she added.

"As a human being, it is something that touches my heart but, as a politician, allow me to take this opportunity during an informal meeting to say: "I'm tired of seeing politicians being expected to react with emotion. Our job is to make rational decisions in line with our emotions.  I'm sure that we are all shocked by these images but I expect for us not only to be shocked but also that we are responsible enough to make the resulting decisions", she concluded.