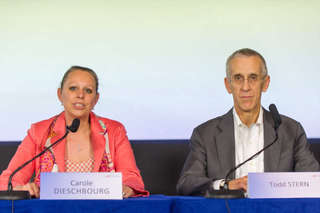 On 18 and 19 July 2015, the Major Economies Forum on Energy and Climate (MEF) met in Mondorf-les-Bains in Luxembourg. The meeting was chaired by Luxembourg's Minister for the Environment, Carole Dieschbourg, who is currently the chair of the Environment Council of the European Union, Caroline Atkinson, US National Security Advisor for International Economics (G8-G20 Sherpa), and Todd Stern, Special Envoy for Climate Change at the US State Department.

The 17 permanent major economies participating in the MEF are: Australia, Brazil, Canada, China, the European Union (represented by the Commission and the Presidency), France, Germany, India, Indonesia, Italy, Japan, South Korea, Mexico, Russia, South Africa, the United Kingdom and the United States. They account for 80 % of global greenhouse gas emissions. Also present were observer states. The vast majority of states were represented at ministerial level.

The MEF is an initiative of the US State Department. It was launched in 2009 to facilitate dialogue among major developed and developing economies with regard to climate change negotiations. In view of the COP21 Climate Conference in Paris, four meetings of MEF will take place this year, including the meeting in Luxembourg.

During the press conference after the talks, Luxembourg's Minister for the Environment, Carole Dieschbourg, spoke of a meeting which had resulted in "good proposals". She is of the opinion that a legally binding framework agreement is needed which is dynamic, transparent and resilient. In order to achieve this, "we must now speed up negotiations in order to identify possible policy options".

In that regard, the Minister took the view that the meeting in Luxembourg had been "productive", although a number of "different views" were expressed. She noted that the European Union supports a legally binding agreement which concerns targets for the reduction in greenhouse gas emissions, as well as accountability, reporting and transparency.

As for Todd Stern, he noted that the meeting had been "very good and very constructive" and welcomed the slightly different approach adopted this time which he believes made it possible to focus on several challenges in order to try to "develop a common approach and to achieve convergence". As to the substance, while he acknowledged that there were disagreements, the discussions had led to progress being made.

The US Special Envoy for Climate Change observed that, during the two days, three issues had been addressed over the course of four sessions. One session was devoted to "adaptation", two to the reduction of emissions ("mitigation") and the fourth to transparency. Moreover, the various representatives of the states discussed the issue of financial support over a working dinner, added Todd Stern.

In response to questions from journalists, the Special Envoy stated that discussions had focused on the elements likely to be incorporated into the agreement and whether they should be legally binding. He observed that for the USA, which seeks "the most ambitious" agreement possible, CO2 reduction targets should not be legally binding but, on the other hand, all elements concerning transparency, reporting and checks should be. In addition, he noted that the architecture of the agreement should include the possibility of regular updates and "individual and collective" review. Lastly, Todd Stern further stressed that the objective of the future Paris agreement should be to "make a difference". It should send out "a strong signal" with a view to address the challenge of climate change, he continued.

As a reminder: The Environment Council of 6 March 2015 confirmed that the EU and its Member States are committed to a binding target of at least a 40 % domestic reduction in greenhouse gas emissions by 2030 compared to 1990, to be fulfilled jointly, as set out in the conclusions of the European Council of October 2014. This binding target covers all economic sectors and all sources of emissions, including agriculture, forestry and other land use. During the Environment Council of 15 June 2015, EU Ministers for the Environment expressed concerns about the slow pace of negotiations. They expressed the hope that "the Conference will adopt a legally binding agreement applicable to all Parties and compatible with the 'below 2˚C' objective and the related COP decisions". Following this Council Meeting, the Minister had once again expressed the hope that the COP agreement would be "binding, dynamic, transparent and subject to review every five years".