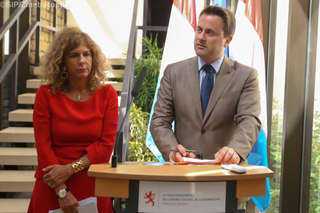 Prime Minister Xavier Bettel received the President of the employers' organisation Business Europe, Emma Marcegaglia, in the context of Luxembourg's presidency of the EU Council on 21 July 2015. Several topics were discussed: the situation in Greece, the strengthening of industrial policy in Europe and the future economic governance of the European Union (EU). Social Europe, business taxation and the reform of emission trading scheme (ETS) quotas were also discussed.

On the subject of Greece, Xavier Bettel and Emma Marcegaglia agreed wholeheartedly that Greece should remain in the eurozone. For the President of BusinessEurope, the compromise found is "good, but not perfect". The aim is to find the "right balance between solidarity and responsibility", "to help the Greek population, but also Greek companies which are experiencing great difficulties following the two-week closure of banks", she added. Emma Marcegaglia also pointed out that it was important for Greece to continue to attract industrial and economic investment.

In terms of competitiveness, Xavier Bettel underlined the importance of a "strong and competitive economy", and called for compliance with social norms and the need to combat social dumping and unemployment. Emma Marcegaglia stated that Europe had lost its ability to be competitive on the international market during the crisis, and emphasised that the EU attracted 42% of foreign investment in 2000 compared to just 22% today.

As for the Conference on Climate Change (COP 21), which will be held in Paris in December, the Prime Minister believed that it had to be a "success". "The fight against climate change is a global challenge", he underlined, insisting on the need to combat "ecological dumping". "Some countries do not care about ecological issues and are more focused on profit, which is unacceptable", he explained, adding that it was necessary to define "common rules" and a "level playing field" at global level.

However, for the President of BusinessEurope, it is "important to reach an agreement in Paris, but one which should guarantee companies' competitiveness". "If we make choices which penalise European businesses too much, investment will move overseas", she added.

On the subject of ecological dumping, Xavier Bettel again expressed his disappointment that some companies are leaving Europe for Africa in order to avoid expensive waste-processing costs. He condemned the fact that "toxic products are being released into rivers where children swim".

Another topic at the heart of the discussions was the reform of emission trading scheme quotas for which the European Commission submitted a proposal on 15 July 2015. In particular, this reform provides for an increase in the pace of reductions in greenhouse gas emissions in order to reach the goal of a 40% minimum reduction in 2030, and a limitation on the total amount of emission quotas allocated per year. Xavier Bettel believes that Europe should be more ambitious than other regions around the world: "if we do not show ambition, other continents will not be ambitious at all", he explained. The Prime Minister insisted on the need to "find the right balance between competitiveness and environment" and avoid "destroying our industry".

However, for Emma Marcegaglia, the Commission's proposal will "seriously damage the competitiveness of energy-intensive enterprises". "We have asked the Council and the Prime Minster to re-evaluate this situation because, without free allocations, high energy-consuming enterprises will have to leave Europe", she added. "For us, this proposal will not allow competitiveness to survive", she concluded.

Finally, on the subject of the Transatlantic Trade and Investment Partnership (TTIP), Xavier Bettel deemed that greater transparency was required. "The TTIP is no longer in a black box and this is in the interest of citizens", he explained.

Emma Marcegaglia believes that an agreement with the United States will be "very important, not so much for multinationals as for small and medium-sized enterprises seeking to enter the American market".