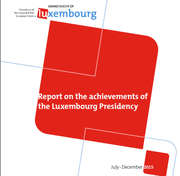 The Luxembourg semester took place in a particularly difficult context, which saw the Union facing a number of unprecedented challenges. The tragic worsening of the refugee crisis and the horrific attacks in Paris on 13 November considerably impacted on the work of the Luxembourg Presidency, requiring a reactive and decisive approach at European level. The Presidency worked on emergency measures to help handle the refugee crisis, and on developing a coherent strategy to counter its root causes. Following the attacks in Paris, the Luxembourg Presidency identified well-defined priority actions such as strengthening external borders, improving exchange of information, more systematic use of databases, combating radicalisation and cooperating with third countries for which, decisions were taken during an extraordinary meeting of the Council.

In spite of these events, which had a very deep effect on Europe, Luxembourg worked hard to make progress on the EU's different areas of action, and rigorously pursued the implementation of its own work programme centred around the seven priorities which it had committed itself to under the motto 'A Union for the citizens'.

The results highlight important agreements Luxembourg was able to reach with the European Parliament. These agreements in turn opened the way for the adoption of new legislation by the EU, namely: the 2016 EU budget, the reform of the Court of Justice of the EU, the setting up of a European PNR system, the directive on the strengthening of the presumption of innocence, simplifying the circulation of a number of public documents, an agreement on the proposal for a regulation on indices used as benchmarks, as well as an agreement on the 'data protection' package. The political agreement that was reached on the inter-institutional agreement on Better Law-making, will have a positive and lasting effect on the way the institutions cooperate, which in turn, will be in the interests and to the benefit of Europe's citizens. Overall, the Luxembourg Presidency was able to conclude 34 legislative files under the co-decision procedure.

The Council reached agreements relating to the Directive on the exchange of information on tax rulings, and concerning two items of the 4th railway package: one relating to the liberalisation of transport services for railway commuters, the other seeking to strengthen railway infrastructure governance. Furthermore, the Council was able to adopt important conclusions concerning the Base Erosion and Profit Shifting (BEPS) initiative. The Presidency was also closely involved in the modernisation of the Investor-State Dispute Settlement (ISDS) mechanism within the framework of the TTIP agreement.

As regards sustainable development, the Luxembourg Presidency, in close consultation with the French Presidency of COP21, coordinated the work of the EU Member States in view of the very first universally binding agreement on combating climate change.

The Presidency was sometimes compelled to respond to urgent situations. Several extraordinary Council meetings were therefore called by Luxembourg in order to respond to the refugee crisis, the Paris attacks, and also to deal with the crises in the dairy and pork meat sectors, as well as the difficulties facing the European steel industry.

The Presidency also hosted the high-level Eastern Mediterranean – Western Balkans Route Conference in Luxembourg, which brought together EU Member States, associated countries and Western Balkan countries including Turkey, Lebanon and Jordan, and led to an agreement on enhanced cooperation between all countries concerned and on supporting the efforts of frontline countries affected by the migration crisis.

On migration crisis background and considering the security situation in Europe, the Presidency has paid particular attention to the enlargement policy. Luxembourg is particularly pleased that it was possible to open the very first chapters of negotiations with Serbia and to proceed with the opening of new negotiating chapters with Turkey and Montenegro.

Lastly, Luxembourg implemented innovative working methods as for example the fact that from now on, in the Competitiveness Council the analysis of competitiveness will be based on an integrated vision, taking into account all European policies and striving to emphasise the added value of the EU. The December EPSCO Council adopted conclusions on social governance in an inclusive Europe with the aim of strengthening the social dimension of the European Semester to ensure a more balanced pattern of sustainable and inclusive growth in the EU.

The outcomes of several conferences resulted in debates being held at the Council, and even conclusions being reached, such as those on the social economy, the impact of the digital economy, and on development policy, to name but a few.

Overall, 1503 formal meetings were held in Brussels during the Luxembourg Presidency. Indeed, the Council met 49 times, including nine extraordinary sessions. Finally, the Presidency was able to welcome, as part of the 262 events organized in Luxembourg, some 22 644 participants and 6 875 delegations.