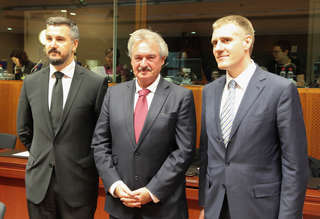 The Luxembourg Minister for Foreign and European Affairs, Jean Asselborn, chaired the seventh intergovernmental conference held between the European Union and Montenegro in Brussels on 21 December 2015.

In the presence of Montenegro's Deputy Prime Minister and Minister for Foreign Affairs, Igor Lukšić, the chief negotiator of Montenegro, Aleksandar Pejović, and the "Balkans" Director of the Commission, Catherine Wendt, the seventh intergovernmental conference held between the European Union and Montenegro has opened two Chapters in the accession negotiations, specifically Chapiter 14, "Transport policy" and 15 "Energy". The number of chapters opened with Montenegro has thus increased to 22 out of a total of 35.

Minister Jean Asselborn welcomed the fact that "the enlargement policy has been reinvigorated under the Luxembourg Presidency, as it is a policy which is essential for facing the numerous current challenges". He emphasised that this accession meeting was the third such meeting held under the Luxembourg Presidency, following the meetings of 14 December with Turkey and Serbia. "It has been years since any Presidency has been able to open chapters with three countries during its semester", he explained.

Jean Asselborn outlined that "with the two chapters opened today, we have a total of 22 out of 35 negotiations chapters open. This makes Montenegro the country that is currently the most advanced in its negotiations with the European Union, and sets a positive example for the entire region". He called upon the Montenegrin Government "to take the decisions that are indispensable to ensure that the whole of the system relating to the rule of law produces concrete results", while underlining that the totality of these efforts will produce specific and immediate benefits for the Montenegrin population.

Minister Jean Asselborn likewise called upon all political parties "to demonstrate a sense of responsibility and to resume constructive dialogue within the Parliament".  Minister Jean Asselborn said that "in a parliamentary democracy, differences must be able to be resolved in Parliament. I hope that all of the parties will demonstrate the necessary maturity to achieve this".

Lastly, he highlighted the positive role being played by Montenegro in regional cooperation.

Press release from the Ministry of Foreign and European Affairs