Carole Dieschbourg, current President of the Council of Ministers for the Environment, was received by Pope Francis at the Vatican on September 16, 2015. The Minister headed an official delegation of around twenty EU Ministers of the Environment and in that capacity conveyed a common message for the head of the Catholic Church. 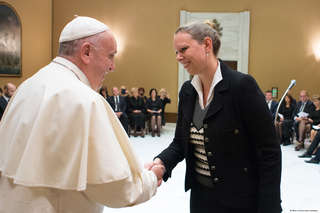 During the audience, the delegates discussed Pope Francis's encyclical on the environment ("Laudato Si"), the challenges of the Climate Conference and the Special Summit on Sustainable Development which will be held in New York at the end of September.

During her speech, the Minister stated that the encyclical "Laudato si’ ", which calls on the world to go through an "ecological conversion", comes at a crucial and decisive moment and makes a useful and enriching contribution in the run-up to the Paris summit.

The Minister specified that the encyclical is a spiritual document which has the distinction of resonating far beyond the Catholic Church and of making a clear statement: "We will not solve the crisis of poverty without solving crises in the climate and environmental spheres. And we're not going to overcome severe crises – migration, wars and hunger – without restoring the dignity of men and women in respect of the earth that feeds us."

On the face of it, the consequences of climate change and environmental pollution separate us in a wider sense, because they do not affect us all in the same way. The struggle to restore our common home should unite us to be successful. "

The visit to Pope Francis forms part of a round of meetings with stakeholders at a political and civil society level which the Environment Minister is holding in light of this important meeting at the end of the year.

The preparations for Paris are underway: the European Union's mandate regarding the Climate Conference will be adopted during the meeting of the Council of Ministers for the Environment, which will take place this coming September 18, in Brussels.