As with all rotating Presidencies, the Luxembourg Presidency of the Council of the European Union is offering a decoration of the Council's "Justus Lipsius" building in Brussels.

The Government has entrusted the project to the Ministry of Culture, which has been working with the Luxembourg consultant and designer, Georges Zigrand, to create a unified design of three areas: the so-called "Presidency's Office", the hall and the atrium. The whole decorative project invites the visitor to an overall interpretation of the design, which highlights the social dimension and human side of Luxembourg and the European Union.

The idea is first found in the Office of the Presidency, an area situated near the Council's large conference room where bilateral meetings are held. The aim is to recreate a campfire atmosphere with a circular bench, flame-coloured carpet and coffee table - which draws its inspiration from logs - and wooden decor that styles Luxembourg's forests. Evoking the social dimension of such an area and its ability to gather people together, delegates are invited to sit at a distance of their choice - in the knowledge that in a circle no places are better or worse - to talk and debate for as long as necessary, and then, more importantly, to move closer and draw near to each other. An adjoining waiting area has also been fitted out with Luxembourg designer furniture.

The idea of sitting together in a more sociable and friendly way is also put across in the Atrium (the building's large reception area). The 28 deck chairs, which bring together in a proportionate yet abstract manner the colours of the flags of the 28 Member States, invite visitors to move the deck chairs around and reconfigure them if they wish. The deck chairs also refer to the poetic image of time spent with family and friends, which for many Luxembourg citizens, means past holidays spent at the Belgian coast - a nod also to Belgium, the country with which Luxembourg has close links, and which houses the Council. 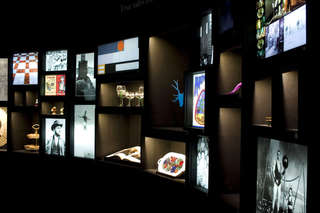 To round it all off, a "Cabinet of wonders" exhibition has been set up by the Luxembourg Presidency in the hall on the ground floor. The goal of the exhibition is to attract visitors' attention to lesser known facets of Luxembourg, and to bring to the fore personalities who have marked the past or are making a mark on the present of the country. The exhibition will also highlight surprising and sometimes unusual objects that bear witness to the creativity, culture, history, inventors' genius, excellence, friendliness, tastes, and leisure activities of Luxembourg's citizens who have always been immersed in a European environment. All in all, 45 anecdotes, ranging from Ketty Thull to Buff, to Léa Linster's madeleines, Villeroy & Boch, RTL or George Christen's bent nails. By means of an explanatory brochure, the cabinet invites visitors to go beyond the conventional view of Luxembourg and Europeans, and to remain curious about each other.

Communicated by the Ministry of Culture