The EU ministers responsible for European affairs met in Brussels on 15 December 2015, during the EU General Affairs (GAC) chaired by the Luxembourg Minister for Foreign and European Affairs, Jean Asselborn.

Preparation for the European Council in December 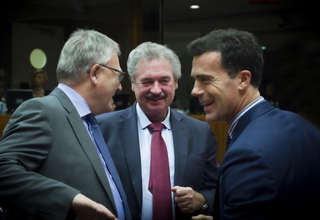 Jean Asselborn remarked on the 'abundant' agenda for the European Council, noting that Heads of State and government will discuss the Five Presidents' Report on completing Economic and Monetary Union (EMU). 'Now is the time for the European Council to set the political agenda for future work', he continued. In the same vein, the GAC also took stock of the work steered by the Luxembourg Presidency on that report in the various Council configurations 'which have enabled us to pinpoint some avenues for the months to come', the Luxembourg minister emphasised.

The ministers also exchanged views on other issues to be addressed by the Heads of State and government during the meeting in December. The implementation of measures agreed in light of the migration crisis will also be addressed. Jean Asselborn explained that 'implementation holds the key here', adding that 'no progress will be made unless the policies agreed are implemented on the ground'. This is true for all aspects of EU action, i.e. the hotspots, relocations, returns, as well as strict and effective external border controls, he noted.

Among the other subjects, Minister Asselborn noted that the fight against terrorism had 'sadly found its way onto the agenda'. He called for tangible results to be achieved more quickly, in particular regarding cooperation between Member States. Deepening the internal market, the implementation of the Energy Union, and the results of the COP21 will also be discussed during the European Council, as well the United Kingdom's referendum on EU Membership.

On this last point, Jean Asselborn noted that everyone has had an opportunity to read the letter from the British Prime Minister David Cameron addressed on 10 November to the President of the European Council, Donald Tusk, and the latter confirmed that this week was not the time 'for final decisions'.'We have heard Minister David Lidington on the United Kingdom's expectations', the Luxembourg Minister indicated, and took the view that 'more in-depth discussions are needed to find solutions to some of the demands'.In his view, 'now is the time to listen to every point of view and get off to a good start for the European Council in February'.

The Council also approved the text for a new interinstitutional agreement, entitled 'Better regulation', which had been the subject of a temporary agreement with the European Parliament and the Commission of 8 December 2015. This was after three months of negotiations led by the Luxembourg Presidency, which were 'difficult', but 'always held in a positive and cooperative atmosphere'. This point was discussed in the presence of Minister Nicolas Schmit, who is responsible for relations with the European Parliament and lead negotiator for the Council.

As set out in the GAC conclusions, the interinstitutional agreement is designed to ensure that EU legislation focuses on the areas where it has the greatest added value for European citizens, is as simple and as clear as possible in order to avoid over-regulation and reduce the administrative burden on citizens and businesses, and SMEs in particular.

'This interinstitutional agreement will significantly improve the way in which the institutions work together in order to ensure that the ambitious aims set out in the EU Treaties can be achieved', Jean Asselborn noted. 'Legislation must be clearer, more effective, more modern, and suitable for achieving its aim and as simple as possible in order to produce tangible and long-lasting results for citizens, businesses and society in general', he added.

To achieve these objectives, the agreement between the three institutions aims to improve interinstitutional cooperation on legislative programming in particular, as well as strengthening the impact assessments for new initiatives, to ensure greater transparency and public consultations in the legislative process.

For the next steps, the agreement will be submitted to the Council for formal adoption after finalisation by the lawyer-linguists and will be signed following the conclusion of internal procedures within the three institutions under the future Netherlands Presidency which will get down to work on implementing the new agreement.

The GAC also approved the programme of works for the Council for the forthcoming eighteen months, drawn up by the trio of successive Presidencies of the Netherlands, Slovakia and Malta, in close cooperation with the Commission and the President of the European Council.

He pointed out that, just like the priorities for the Luxembourg Presidency, this programme was inspired by the Strategic Programme adopted by the European Council in June 2014. Furthermore, he welcomed the fact that the upcoming trio was inspired by the Luxembourg Presidency and also presented 'a much shorter and concise document setting out its priorities', which is therefore 'more operational'. Jean Asselborn praised the quality of the cooperation with the incoming trio, particularly the future Netherlands Presidency which has been involved with the work over the past few weeks.

Enlargement and Stabilisation and Association Process

The ministers also debated enlargement and the stabilisation and association process, on the basis of an annual communication and the country reports by the Commission. They formally adopted the conclusions prepared by the Luxembourg Presidency which represent 'a point of equilibrium between the positions of the various delegations', Jean Asselborn explained.

EU enlargement policy covers Turkey, Montenegro and Serbia – new negotiation chapters have been opened for Turkey and Serbia – whereas the stabilisation and association process for the EU-Western Balkans covers the Former Yugoslav Republic of Macedonia, Albania, Bosnia-Herzegovina and Kosovo.

In its conclusions, the Council stressed its commitment to the enlargement process and the future of the Western Balkans countries with Europe. Turkey is presented as an important partner in various domains, and the Council takes the view that active and credible accession negotiations, in line with the EU's established conditionality commitments, will help the full potential of EU-Turkey relations to be realised.

Furthermore, the Council wishes to underline the importance it attaches to the credibility of the enlargement process, which holds the key to maintaining the reform's momentum. It also welcomes the Commission's constant work on the issue of fundamental reforms, right from the beginning of the accession process, in particular with regard to the rule of law.

Finally, the Commission presented its Annual Growth Survey for 2016, which marks the launch of the European Semester, the annual EU economic governance cycle, which lays down the general priorities for the EU in economic and social terms and sets the policy agenda for Member States for the years to come.In this regard, the Council took note of the information provided by the Commission, Jean Asselborn concluded.