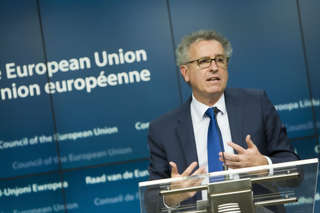 European Union (EU) Economy and Finance Ministers met in Brussels on 8 December 2015 for the 'Economic and Financial Affairs' (ECOFIN) Council, chaired by the Minister for Finance, Pierre Gramegna.

The agenda of the meeting was largely devoted to taxation, with the adoption of conclusions on the future of a code of conduct on business taxation and on tax base erosion and profit shifting (BEPS). The Council also discussed the progress on international aspects of a proposed common consolidated corporate tax base.

In addition, Ministers addressed the state of play of banking union legislation and the European Commission's proposal for a regulation establishing a European deposit guarantee scheme.

Implementation of the BEPS project in the EU

After an exchange of views, the Council adopted conclusions on how to implement the Organisation for Economic Co‑operation and Development's (OECD) conclusions on the BEPS project in the EU context.

The phenomenon referred to as BEPS has been the subject of work by the OECD to address the challenges posed by the interaction of uncoordinated tax laws in different countries.

In their conclusions, the Ministers support an effective, swift and coordinated implementation by Member States of measures to be adopted at EU level. They identify EU directives as the preferred vehicle for implementing the OECD conclusions, with recourse to other non-legislative solutions for implementing certain anti-BEPS actions.

At the press conference following the Council, Pierre Gramegna stated that the EU 'was, is and will remain a pioneer in the implementation of OECD recommendations', with the Minister also stressing that, to some extent, the EU had anticipated the BEPS actions following the formal adoption of the Council of the Directive on the automatic exchange of information on tax rulings. Moreover, he highlighted the 'swift' work of the Presidency on this dossier.

In the same context, the Council adopted conclusions on strengthening the code of conduct on business taxation aimed at eliminating measures that can create situations of unfair tax competition. Pierre Gramenga was pleased to announce that 'We have reached an agreement on strengthening and improving the EU code of conduct', an issue which is, however, 'complex', revealing that the aim of the conclusions was to 'improve the efficiency and visibility' of the code.

The code, created in 1997, is used to assess the harmfulness of tax measures adopted, or in the process of being adopted, by the Member States. A working group was set up in 1998 to oversee its implementation and twice a year the group submits a report to the Council.

In their conclusions, the Ministers highlight the usefulness of the work done by the code of conduct group in assessing individual tax measures in the Member States. The Council also approved a new work package for the group, and encouraged it to develop general guidance to prevent tax avoidance, tax base erosion and profit shifting.

The Council took stock of work, in light of a note from the Presidency on a proposal to establish a common system for calculating the corporate tax base in the Member States.

The Commission issued the proposal in March 2011 to address tax obstacles for businesses that arise from the coexistence of different national tax systems. The aim is to ensure consistency, but without harmonising tax rates. The proposed directive is also aimed at avoiding risks of double taxation and reducing opportunities for aggressive tax planning.

Although the proposal has been blocked in the Council, the Commission announced its intention, by presenting a work plan on corporate taxation, to relaunch it by submitting a proposal for an amended directive on the CCCTB.

In this regard, Pierre Gramegna stated that the Commission would present a comprehensive package on taxation and transparency in January 2016 and that the work of the Presidency had been 'to prepare the work and to establish whether reaching an agreement on an anti-BEPS directive would allow for the implementation of the OECD's conclusions'. The Minister stressed that the Council had agreed to such a directive being a good working method in this context.

After an agreement was reached at the Council's meeting on 6 October, the Council adopted, without discussion, the Directive on administrative cooperation in the field of taxation concerning the exchange of information on advance tax rulings.

The Council also approved, without discussion, three agreements relating to the automatic exchange of financial account information on private savers with Liechtenstein, San Marino and Switzerland.

With regard to the banking union, the Council exchanged views following a presentation by the European Commission on the proposal for a regulation establishing a European deposit guarantee scheme and on a Commission communication entitled 'Towards the completion of the Banking Union'.

Specifically, the proposal sets out to establish an guarantee scheme to reinforce deposit protection in the Member States. Deposit guarantee schemes (DGSs) provide protection to depositors against the risk of loss arising from the failure of a bank or other deposit institution. But whereas the current set-up of national DGSs remains vulnerable to local shocks, the Commission takes the view that a common deposit guarantee would boost resilience against future crises.

'We have already carried out a first round table discussion on this proposal and the good news is that we have reached an agreement on the fact that work must start in January in an ad hoc working group', explained Pierre Gramegna. This group could be established at the next meeting of the Committee of Permanent Representatives (COREPER), he added.

Implementation of the banking union

In the same context, Ministers were also briefed on the ongoing implementation of banking union legislation, including in particular the ratification of the intergovernmental agreement (IGA) on the single resolution fund (SRF), as well as the transposition of the bank recovery and resolution directive (BRRD) and the deposit guarantee scheme (DGS) directive.

In this regard, Minister Pierre Gramegna welcomed the fact that Member States participating in the banking union had reached an agreement with the Council on the mobilisation of bridge financing for the single resolution fund to ensure its set up.

On the sidelines of the Council, Finance Ministers from the 28 Member States signed a statement in which they hailed the agreement on bridge financing and the ratification of an IGA on the SRF so as to enable entry into force on 1 January 2016.

Valdis Dombrovskis, Vice-President of the Council, welcomed 'the progress made today' on the banking union, since a 'significant number of Member States signed the intergovernmental agreement' on the SRF which will allow for the mutualisation of contributions to the fund. He also welcomed the Council's agreement on bridge financing for the SRF which will enable the entry into force of the SRF on 1 January 2016. Moreover, the Vice-President said that it will have sufficient financial resources to strengthen its credibility.

Flexibility in applying the rules of the Stability and Growth Pact

In addition, the Council approved the agreement on flexibility in applying the rules of the Stability and Growth Pact (SGP) at the level of the Economic and Financial Committee, one of the Council's preparatory working groups. These rules will be taken into account by the Commission in its fiscal surveillance assessments.

To support the EU's efforts to increase investment levels and encourage structural reform, the European Council considered, in June 2014, that flexible application of the SGP rules was necessary without changing the rules of the pact. On this basis, the European Commission presented a communication entitled 'Making the best use of the flexibility within the existing rules of the Stability and Growth Pact' in January 2015.

The Council launched the European Semester by analysing three documents presented by the Commission: the annual growth survey for 2016, the alert mechanism report 2016, and the draft Council recommendations to the euro area.

Vice-President of the Commission and Commissioner for the Euro, Valdis Dombrovskis, welcomed the 'significant agreement' reached on the priorities of the annual growth assessment, which marks the start of the European Semester 2016. The priorities are relaunching investment, pursuing structural reforms and implementing responsible fiscal policies, indicated the Vice-President, stating that 'there are still major differences' at a socio-economic level between the Member States and the eurozone.

In light of a report from the Austrian delegation chairing the discussions, the Council discussed the state of play of the ongoing negotiations on the proposal for a directive on the financial transaction tax. Following Estonia's withdrawal, ten Member States are currently participating in the enhanced cooperation procedure on the proposed directive, with all Member States participating in the discussion.

'We have taken stock of the progress made', stated Pierre Gramegna, who noted that the report set out the scope of application of the proposed FTT.

Valdis Dombrovskis stated that the Ministers of the ten Member States had reached an agreement in principle and that he believes that the details should be addressed before the summer. The Commission will offer its support in order to translate this agreement into legislative terms and will ensure that the text complies with EU and international law, in particular with regard to the rights of Member States not participating in the FTT, the Vice-President said, stressing that the future FTT must comply with measures at European level, in particular the banking union.