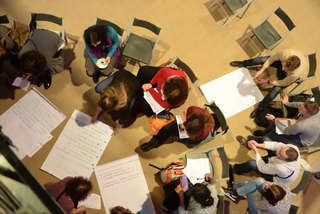 With the focus this year on the issue of social standards in the EU, through the organisation of conferences and themed workshops, the meeting aimed to offer people experiencing poverty the opportunity to share their experiences, obtain recognition and give visibility to this highly sensitive matter, with almost 122 million people considered to be at risk of poverty in the EU. In this context, the meeting also aimed to establish a strategic dialogue by allowing direct exchanges with political leaders with a view to provide food for thought on the subject.

For the occasion, the Presidency's website met several members of the Luxembourg delegation, who, on their return from Brussels, gave an account of their experience of these two days of work.

A meeting focused on exchange

No fewer than 30 national delegations met in Brussels on 19 and 20 November 2015 in order to participate in the European Meeting. According to Charles Berrang, Research Officer at the R&D service of the Caritas Foundation and National Coordinator of the Luxembourg delegation for EAPN Luxembourg, the watchword of the meeting was exchange.

Through several workshops and round tables, the delegations shared their experiences on a national level, ranging from the situation of people experiencing poverty to the work of associations involved in this context, and including the political support which exists or not in this field. It was an exercise which helped to show that there are "very great differences from one government to another" and that "although all is not perfect in Luxembourg, a great deal is, nevertheless, being done", he continued.

Poverty is not solely financial

In this context, one of the conference's main messages is that the definition of poverty cannot be restricted to financial poverty, but that it is necessary to take account of all its aspects. "Poverty can also be cultural", recalled Charles Berrang, who noted that the debate largely concerned the need "to not organise poor people on a hierarchical basis, to not say that one poor person has a priority over another", with the conference welcoming a very large variety of people – victims of sexual abuse, the unemployed, single parents – i.e. "a very wide spectrum".

Pitting poor people against one another, in particular those who work and those are unable to work, as is often the case, poses a great risk, explained Nadia Dondelinger, Head of the Schlaifmillen Workshop and the ACT! service for the Inter-Actions association and member of the Executive Committee of EAPN Luxembourg. "When we say that one poor person deserves more help than another and, as a consequence, we refuse the latter help, there is a risk of finding that person three months later in a much more serious situation, requiring help for several years", she explained.

The decline into poverty can be very quick and can affect everybody, continued Charles Berrang. A video presented by the Dutch delegation gave an account of a young "happy, married" man whose life was turned upside down when he divorced, an event quickly followed by the death of his father which "resulted in his complete collapse". "People who lead a normal life can sink into poverty as a result of personal or professional setbacks", he indicated.

Also, another key aspect in this context is that it is not poverty that defines the person, added Nadia Dondelinger. "Human dignity and character are much more important than the fact of finding oneself in a situation of poverty", she said. Human dignity should be at the heart of all legislative projects on this subject, she declared.

In Luxembourg, employment and housing are sources of precariousness

It was precisely this type of setback suffered by Tahar, one of the members of the Luxembourg delegation. At the age of 55, this trained maître d’hôtel has been working for three years at the Vollekskichen of the National Committee of Social Defence (CNDS) in the framework of the guaranteed minimum wage (RMG), after losing his job following a "very difficult" divorce, which, in particular, meant that he could only see his child three hours a week.

This forced him into a highly unstable situation "overnight", with not only the question of work but also that of housing becoming a problem for him: although he works 40 hours a week, his status as a beneficiary of RMG, which is evaluated regularly and is subject to revision, does not entitle him to the advantages of a fixed-term contract which, very often, is required in Luxembourg to obtain housing. Also, returning to the job market is made more difficult by his age, as he is often deemed to be too old by recruiters.

If Tahar chose to participate in the European Meeting, it was in order to give an account of the fact that "poverty can affect anyone at any time". "After listening to the other delegations, we can see that things are alright here and that Luxembourg does a great deal to help, but it is necessary to raise the alarm about certain problems, firstly employment and housing", he stressed, insisting on the fact that, although the country's image is one of the best in Europe, things are not all that easy in the Grand Duchy. "Housing is a matter of precariousness in Luxembourg", he added, especially for those who benefit from the RMG and for single-parent families.

In this context, the European Meeting of People experiencing Poverty aims, above all, to provide people in these situations with a platform for direct exchange with political leaders. "When you are experiencing a situation and nobody is listening to you, it is very hard; this meeting therefore offers these people the respect they deserve by listening to them and passing on their message to the institutions", explained Nadia Dondelinger. On this subject, Charles Berrang insisted on these people's "real desire to participate and be heard", as "there is often a feeling that politicians are disconnected from realities" and that "as one participant said, the best discussions are always face-to-face".

"There is a real added value in political leaders seeing real people", continued Charles Berrang, according to whom such opportunities for direct contact sometimes help things to progress in more concrete terms. "They are two completely different worlds, but seeing the person and listening to what they have to say is quite different from reading about it in a report", with these people's reality, something about which those working with them can only give an account, often being "extremely hard", added Nadia Dondelinger.

"Everyone deserves a decent life"

In the summary of its participation in the workshops, the Luxembourg delegation highlighted several messages.

The first point recalls that "everyone deserves a decent life" and that, in this context, the aim is to "break down the walls of differences in poverty and stop creating a hierarchy among poor people". "Poverty in all its forms is something that we all have to deal with, and we must be united in fighting it", stressed Charles Berrang.

Secondly, "we have to listen to the people concerned". "It is something that was strongly expressed by the public. There is a real desire to participate in finding solutions". Finally, the aim is to "look at the potential" of people, without limiting ourselves to their situation or their appearance. "The idea is to say: I have skills, I can do things, do not limit yourself to my current situation", concluded Charles Berrang.