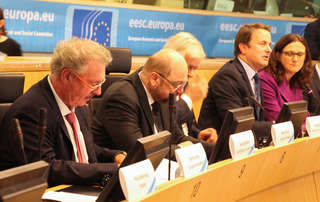 The Luxembourg Presidency of the Council of the EU, together with the European Parliament, the European Commission and the European Economic and Social Committee (EESC), held a conference in Brussels on 17 November 2015 entitled "TTIP - What's in it for the social partners?". The purpose of the conference, which brought together social partners from the 28 Member States for the first time, was to address different aspects of the negotiations on the Transatlantic Trade and Investment Partnership (TTIP) currently being discussed by the EU and the USA, and in respect of which a number of concerns have been put forward.

Prime Minister Xavier Bettel, who gave the opening speech, stated that "never before has EU trade policy been the subject of such passionate and sometimes heated debate", particularly in Luxembourg. According to the Prime Minister, these differences of opinion are evident among social partners as well, particularly trade unions. The purpose of the conference was therefore to "lead an open and constructive discussion in order to provide answers and clarifications, but above all to listen to your concerns", he told the social partners.

One of the main criticisms levelled at the TTIP relates to the lack of transparency of the negotiations, observed Xavier Bettel, who highlighted the "striking disconnect" between the scale of the future agreement and the communication strategy towards citizens which he characterized as "traditional". That is, "communicating so as not to encourage questions which are easier to avoid than to tackle", said the Prime Minister, who congratulated the Commissioner for Trade, Cecilia Malmström, for having "overturned this custom". Nevertheless, although transparency is a necessary requirement, it is not enough, continued Xavier Bettel, who stressed the need to ensure that information in the public domain be understandable, because the TTIP will only be accepted if its issues and objectives are clearly understood.

According to Xavier Bettel, the European position is clear. "We do not want the TTIP at all costs – we want a comprehensive and qualitative agreement which, it should be stressed, does not call into question our European models." Moreover, the right of governments to pursue public policy objectives on issues of protecting health, employees, consumers and the environment "is in no way called into question", he reassured.

In terms of the potential benefits, the TTIP will make it possible "to strengthen transatlantic links" and contribute to "boosting the competitiveness of European businesses, especially at a time when the focus of our US partners is on the Asian markets", he continued. In particular, the agreement will lead to the abolition of discriminatory provisions, a reduction in the increasing bureaucratic burden and the removal of customs tariffs "which, for certain products, can be significant in terms of additional costs and cause difficulties for businesses", in particular SMEs wishing to export to the USA.

President of the EESC, Georges Dassis, highlighted the fact that the EU has always been committed to incorporating the European social agenda into its policies, and that this should also be the case with trade policy. While civil society fears relating to the lowering of standards have garnered unprecedented public attention on TTIP negotiations, the President has called for changes to trade policy so that everyone benefits.

Georges Dassis also referred to the "legitimate expectations" of social partners in this regard, which must not be disappointed. He believes that it is therefore necessary to provide information about all the different aspects of the agreement, both positive and negative, which will generate winners and losers. In this regard, he called for the potential negative consequences of the TTIP to be better assessed and thus managed.

The President of the European Parliament, Martin Schulz, stressed that without trade, without exchanges of goods and services, the European economy would soon grind to a halt. "The globalisation of the economy is not a political agenda – it is a fact and it is our responsibility to adapt to this", he stated. In order to "shape" globalisation, it is therefore necessary to embrace opportunities such as the TTIP so as to "preserve our rules and values", as the USA and the EU represent 50 % of global GDP, continued the President.

Martin Schulz welcomed the progress that has been made in terms of the transparency of negotiations, which now make it possible to hold "discussions on the basis of facts", as well as progress made by the Commission on the issue of the Investor-state dispute settlement (ISDS), which has been strongly criticised by opponents of the TTIP who regard it as private justice. In its resolution of 8 July 2015 on the TTIP, the European Parliament called for a reform of this system of investor protection and an agreement was reached, revealed the European Parliament President. "Now it is also up to the USA to demonstrate that it really wants TTIP, and that it also willing to take EU citizens' wishes seriously".

"In general, the TTIP will not change EU norms and standards"

During high-level round table discussions on the TTIP, the Minister for Foreign Affairs, Jean Asselborn, recalled the fact that the TTIP was negotiated on the basis of a mandate given to the Council – and therefore the 28 Member States – under the supervision of the European Parliament and national governments and parliaments "which will have to approve the agreement". In addition, progress made on the issue of transparency, in respect of which "the Presidency is campaigning tirelessly", are "enormous", stated the Minister.

"In general, the TTIP will not change EU norms and standards", continued the Minister, who observed that it seeks to establish cooperation mechanisms for the development of future norms and standards in the context of a globalised world. By contrast, he promised that "our social standards, including labour law, will be strengthened by this agreement", highlighting that there would be "no social dumping under the TTIP".

The Minister once again emphasised the fact that data protection systems, which differ significantly across the two sides of the Atlantic, will not be harmonised and that particular attention will be paid to "respecting agricultural sensitivities, including highly publicised issues such as GMOs" in respect of which the TTIP "will have no bearing on our position". Moreover, there is no automatic link between the exploitation of shale gas in the USA and the EU, as it falls under national jurisdiction.

The Commissioner for Trade, Cecilia Malmström, sought to highlight several elements. Firstly, the potential economic benefits of the TTIP are good for both employers and trade unions, with almost 5 million jobs in Europe dependent on exports. "This will facilitate exports and the creation of new job opportunities, in particular for SMEs", she said. In addition, while it is true that more openness will bring more competition and that some sectors will shrink as others grow, the EU has the tools to accompany such changes, in particular structural and cohesion funds, continued the Commissioner.

Cecilia Malmström also noted that, the week before, the Commission had adopted her proposal for a chapter on trade and sustainable development, particularly relating to work and the environment, as part of the TTIP. In particular, it includes a statement by both parties to comply with the fundamental conventions of the International Labour Organisation. However, as far as the supervision and enforcement of those rules and the participation of civil society is concerned, the Commission seeks to make more progress on the content of the chapter before setting out monitoring mechanisms.

With regard to the ISDS, the Commission has submitted a proposal for a revised "investment court system" to the USA. This new system would preserve the right to regulate and establish a judicial appeal mechanism on the basis of clearly defined rules, qualified judges and transparent proceedings, she confirmed.

The Chair of the committee on International Trade of the European Parliament and rapporteur on TTIP, Bernd Lange, regretted that the public debate on TTIP is often characterized by insecurity fueled partly by misinformation. Transparency is for him indispensable for the involvement of the social partners and the civil society, and while still more can be done, the initiative of the Commission has set new standards for transparency in trade negotiations. Moreover, Bernd Lange believes the TTIP will increase the competitiveness of the EU economies, offer innovative and cheaper products and services for the European customers, strengthen the transatlantic partnership and also add greater weight to the European values on a global scale.

Bernd Lange also referred to the implementation of core labor standards of the International Labor Organization which constitute the central element of the TTIP chapter on sustainable development. In its recommendations to the Commission, the European Parliament called for this chapter to be binding and enforceable.

Director General of BusinessEurope, Markus J. Beyrer, highlighted the potential benefits of the TTIP. He drew attention to market access in the USA, which is currently neither open nor transparent. But he also called for an organic agreement which can be adapted to future obstacles that may arise following the conclusion of such an agreement. With regard to the ISDS, he acknowledged that there was room for improvement, but challenged the Commission's proposal for reform, declaring the debate to be "misguided". He hammered home the point that businesses which invest abroad are in a weak position in relation to the government and not the other way around.

Confederal Secretary of the European Trade Union Confederation ETUC, Liina Carr, reiterated that globalisation and trade can be positive, but that the ETUC wants trade to be fair and to have equivalent and fair rules. In particular, she lamented the lack of monitoring measures with regard to the TTIP chapter on sustainable development submitted by the Commission and called for the implementation of supervision mechanisms similar to those provided for in the context of the EU's free trade agreement with South Korea which also covers social partners. Finally, the TTIP should generate high-quality jobs, something which the ETUC is sceptical about, hence why it is calling for sector-specific studies.