EU Ministers in charge of Competitiveness met in Brussels on 9 November 2015 for an Extraordinary Meeting of the Competitiveness Council chaired by Etienne Schneider, Deputy Prime Minister and Minister of the Economy. The discussions focused on the "deep crisis which is currently affecting the European steel sector", which has led to a series of plant closures and loss of jobs in the EU. The Economy Ministers took stock of the situation on the basis of a background note prepared by the Luxembourg Presidency and examined the measures needed to rectify the sector's competitiveness.

In order to inform the debate, the Luxembourg Presidency invited several decision-makers from European steel companies, who presented the industry's point of view.

"Our meeting led to some concrete points of action" Etienne Schneider welcomed, referring to the Presidency's conclusions, which list several measures designed to support the steel sector. Jyrki Katainen, Vice-President of the European Commission in charge of Employment, Growth, Investment and Competitiveness, highlighted the need to adopt "structural measures" at the level of Member-States and the EU, as well as on an international level, so as to create a "level playing field" for the steel market.

"The steel industry faces important, immediate challenges which are putting at risk the existence of a significant and competitive steel industry in Europe", declared Etienne Schneider during the press conference that followed the Council meeting. 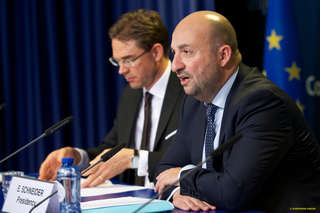 Believing the steel industry to be "highly strategic for the EU", Etienne Schneider stressed the importance of having "adequate framework conditions in order to remain competitive at a global level".

The EU is the second largest producer of steel in the world after China. Its production exceeds 177 million tonnes of steel per annum, representing 11% of the world's production, compared to 22% in 2001 and 15.7% in 2007. The sector has a strong European dimension: there are some 500 production sites in the EU divided between 23 Member States.

Etienne Schneider explained that the steel industry's difficulties were, in particular, down to the global excess capacity in steel, estimated to be 500 million tons - 300 million tons of which comes from China - which corresponds to three times the EU's total production level. This is pushing down prices dramatically and is encouraging trade distorting behaviour", he lamented.

Furthermore, "energy costs in the EU are much higher compared to other steel producing regions of the world", he added "For example, our producers pay roughly double the price of their American counterparts", he stated.

"There is no miracle solution", stated Jyrki Katainen, highlighting the need to adopt "structural measures" both at the level of Member-States and the EU, as well as on an international level, so as to create a "level playing field" for the steel market.

The conclusions of the Luxembourg Presidency

"We have not just held discussions, our meeting has already led to some concrete points of action", Etienne Schneider was pleased to note, referring to the Presidency's conclusions.

The document showed that the ministers recognised "the gravity of the situation" and agreed on the need to take concrete actions that will ensure the long-term viability of the European steel sector. "The Council also considered that these measures should be part of a comprehensive approach, aiming at creating competitive framework conditions for EU industry as a whole", the Minister added.

Etienne Schneider then listed several measures which, according to the Luxembourg Presidency, should be taken as a matter of priority. These include intensifying discussions involving all important steel producers, such as China, Russia, Belarus, Turkey and India.

"I also note a strong demand to make full and speedier use of Trade Defence Instruments to ensure a global level playing field and to discourage trade distorting behaviour", the Minister added. On this point, Jyrki Katainen indicated that the Commission would continue to use "all the Trade Defence Instruments" at its disposal. "There are currently 37 measures covering the importing of steel products which are in place, of which 21 concern China, directly or indirectly", he said, which according to him prove that these instruments "work".

Etienne Schneider also mentioned the importance of making the best use of the possibilities given under the revised EU State Aid rules to support Energy Intensive Industries.

The Luxembourg Minister then insisted on the need to "make full use of the Investment Plan for Europe" to "upgrade and modernise" the steel sector."There is already a large Italian steel company which could benefit from the European Strategic Investment Fund so as to modernise its steel production", Jyrki Katainen declared on this subject, hoping that other companies would follow.

"We need to make sure that the reform of the ETS system creates the right incentives for industrial innovation and that it encourages the capacity to increase production levels", the Minister also said. "All Member-States agree on the fact that for the reform of the ETS, we should take account of the problem of industries which are heavy energy consumers", said the Minister.

On this subject, Jyrki Katainen warned that "climate negotiations in Paris would have a huge impact on the market, and, in particular an important impact on China's steel production", given the international commitment to reduce CO2 emissions, and that it could have major repercussions on the sector. "We hope that Member-States will use the new aid rules aimed at supporting energy intensive industries, which involves supporting research and development, training, employment, and the indirect costs" of the Emissions Trading Scheme (ETS), the Commissioner also said.

One of the measures also mentioned in the Presidency's conclusions is the need to rapidly implement the European Energy Union "in order to ensure access to sustainable, affordable and climate-friendly energy".

Lastly, Etienne Schneider highlighted the need to make better use of the EU's available financial instruments, such as European Globalisation Adjustment Funds.

As a conclusion, Etienne Schneider indicated that today's meeting was not a "one-off event", but rather "the start of a process". "It was agreed that the Commission will organise a special high-level conference of stakeholders, which will involve social partners, in order to examine the situation and introduce relevant measures", he said. The implementation of an action plan for the steel sector, the EU's latest strategic document on the competitiveness of the steel industry adopted by the Commission in 2013, should be re-examined within this context.