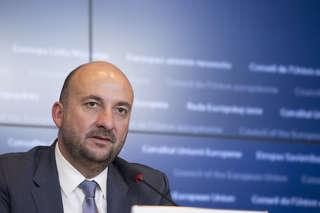 The European Ministers for Internal Security met in Luxembourg on 8 October 2015 for the second phase of the "Justice and Home Affairs Council" (JHA) specifically dedicated to security and terrorism issues. At the meeting presided over by the Minister for Internal Security, Étienne Schneider, the ministers discussed the fight against serious international organised crime and, against this backdrop, adopted a number of conclusions on the reinforcement of measures to combat trafficking in firearms. The Council also discussed the fight against terrorism and the degree of progress made in the ongoing negotiations with the European Parliament on the status of the PNR file.

The Ministers first of all attended the presentation of a Europol briefing on the interim results of the joint coordinated actions conducted between the Member States under the aegis of that agency, and specifically the large-scale suppressive action (known as "Blue Amber") carried out from 4 May to 24 June 2015. This presentation preceded an orientation discussion on the role of the Member States in the ongoing fight against widespread organised crime and their contribution in that regard.

During these actions, some 700 persons were arrested, more than 7 tonnes of drugs seized and 248 vehicles and 51 firearms confiscated. At a press conference held after the meeting, Étienne Schneider stated that the actions "embody police cooperation at European level" and were "a resounding success".

Within this context, the Belgian delegation informed the Ministers of concerns caused by an increase in violent confrontations with motor cycle gangs. "We discussed an integrated and common approach at European level, and we have also identified certain issues which we wish to analyse at a later stage", said Étienne Schneider.

Against the backdrop of the fight against terrorism and, in particular, as an extension of the declaration made by EU officials on 12 February 2015 following the terrorist attacks in Paris on 7 January 2015, the Council adopted conclusions on the reinforcement of the measures taken to combat trafficking in firearms.

The Minster for Internal Security underlined several "key points" of these conclusions:

"The conclusions of the Council have targeted a set of 13 measures which, we firmly believe, will enable us to make definite progress in this struggle", stated the Minister.

In this regard, the EU Commissioner in charge of Migration, Interior Affairs and Citizenship, Dimítris Avramópoulos, emphasised that "it is crucial to fight together against this very serious threat which extends beyond national borders". Whilst trafficking in firearms is a crime in itself, it also is a major facilitator for all types of organised crime and terrorism, he said, noting that the Commission would present its proposal for amending the Firearms Directive and that it would adopt new rules on neutralising firearms as of December 2015.

The EU Counter-Terrorism Coordinator, Gilles de Kerchove, then advised the Ministers of "the exact status of progress" with the implementation of counter-terrorism measures, following the declaration of 12 February 2015. In this regard, the Council "confirmed that significant progress has been made", said Étienne Schneider, who stated that the Luxembourg Presidency and the Coordinator have submitted to the Council "a joint document" laying down "5 priority measures" to be put in place prior to the end of the year.

"These measures relate to the fight against radicalisation and the promotion of extremist ideas on the internet, the enhancement of information exchanged through Europol, more systematic use of the existing databases to identify the movement of foreign terrorist combatants and increased cooperation and assistance to third countries with regard to counter-terrorism", explained the Luxembourg Minister.

Within this context, the Commissioner stated that the Commission would, in early December, launch a forum with the key players in technological matters in a bid to combat extremist propaganda online. In addition, the "common risk indicators" for terrorism developed by the Commission "are also ready, so national customs and border authorities can make full use of them", he said.

Lastly, the Ministers were advised of the recent security-related changes made in the area of railway transport, in the wake of the aborted attack on the Thalys train on 21 August 2015. The matter was central to the working lunch of the European Ministers for Transport attended by Étienne Schneider.

In this regard, he reckoned that any security solutions for railway transport must above all be "proportional and adapted to the level of the threat". "We must take care not to over-react to events, but rather reflect on how to buttress railway security without impinging on the fundamental principles of public transport which include accessibility and ease of use".

Along these lines, the Minister was "pleased to note" the Commission's will to initiate a study on railway security. This study "will have to take into account all the social, economic, legal and security dimensions in order to propose potential supplementary measures", stated the Minister. In turn, the Commissioner expressed support for "avery pragmatic approach, based on cooperation and practical work".

The Presidency has also informed the Council of the degree of progress made with work on the proposed directive relating to the use of passenger data (PNR "Passenger name record").

To reiterate, the draft directive seeks to govern the transfer of PNR data from the airlines to Member States for passengers on international flights as well the processing of this data by the competent authorities. It establishes that the data gathered may only be treated for the purposes of preventing and detecting terrorist acts and serious forms of crime, as well as related inquiries and investigations on that subject.

In April 2012, the JHA Council decided on a general orientation position on the draft directive which dates back to 2011, but it was blocked in the European Parliament for reasons relating to data protection. While the Council has regularly stressed the urgency of finalising this directive due to the growing threat of foreign combatants, the Committee on Civil Liberties, Justice and Home Affairs (LIBE) of the Parliament has at last adopted a revised report on the directive and a mandate to negotiate with the Council on 15 July 2015.

In this regard, Étienne Schneider reiterated that, in February 2015, the European Parliament committed to "finalising the draft PNR directive before the end of the year", and that "this remains our objective". "The policy trilogues have begun, and we are confident that a consensus will be reached on the Council's priorities as they emerge from our general direction of 2012", he added. And noting that "it will be incumbent upon the three institutions to reach a policy agreement, enabling a balanced tool to be implemented, which takes operational aspects into consideration that constitute real added value for the security of our citizens, as well as the protection of data and fundamental rights".

Dimítris Avramópoulos in turn welcomed "the progress made" during the negotiations, stating that he is "confident" that an agreement will be reached by the end of the year.