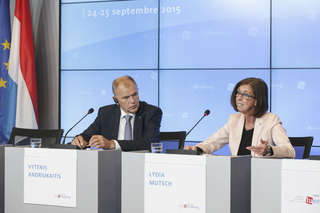 EU Health Ministers met in Luxembourg on 24 and 25 September 2015 for an informal meeting devoted to dementia, healthcare for migrants and the impact of the cross-border healthcare directive on mobility and patients' rights, as well as the impact of trans fatty acids in foods.

Dementia is a "real socio-economic challenge"

The Luxembourg Minister for Health, Lydia Mutsch, who chaired the meeting, highlighted during a press conference that dementia constitutes "a real socio-economic challenge, which seriously tests the viability of our healthcare systems and requires a multi-sectoral response". But the fight against dementia also requires an individualised approach and  an intervention in due course, after an early diagnosis of the illness, confirmed the Minister.

According to Lydia Mutsch, the Ministers deemed that it was necessary "to adapt policies and improve care practices so that each person suffering from a dementia-related illness can receive the best care possible". They also favoured an exchange of good practices via existing EU and WHO forums, she explained.

The Minister again appealed for dementia to be destigmatised, greater investment in research and an adaptation of the role and training of healthcare professionals in order to ensure the "best support possible" for patients and their families. On this occasion, Lydia Mutsch presented Luxembourg's "Dementia Prevention Programme" (DPP), launched in June 2015, which targets people suffering from Alzheimer's disease in its early stages or from vascular dementia, in order to offer them post-diagnostic support.

The health dimension of migration

Regarding health dimension of migration, Lydia Mutsch indicated that the impact of migratory flows on Member States' health systems could not be ignored.

The Ministers were unanimous about the need to take better account of the public health dimension in discussions concerning the refugee crisis, she explained. In particular, this will involve the implementation of coherent and coordinated political actions, she announced. But it will also be important to ensure refugees and migrants have equal access to healthcare systems, and that the capacities of healthcare facilities are reinforced.

The European Commissioner for Health and Food Safety, Vytenis Andriukaitis, indicated that the refugee crisis was an "immediate priority" for the EU, especially with the approaching winter. "Refugees should be treated in humane conditions and it is our duty to provide them with the medical assistance they need", he stated, calling to mind that, in 2015, the European Commission had mobilised €73 million of emergency funding to support reception capacity including healthcare in the most exposed Member States. Furthermore, on 23 September 2015, the Commission announced that it would present a proposal the following week to add €100 million to this budget for 2015, he explained.

The Commissioner also reminded the Member States of the option they had to request aid via the European civil protection mechanism. In terms of hotspots, he announced that the Commission was in the process of preparing a list of the most urgent medical check-ups (communicable and non-communicable diseases, vaccinations) to be carried out, in particular on children, women, pregnant women and the elderly.

The Ministers also discussed the transposition of the directive on cross-border healthcare, which aims, in particular, to clarify patients' rights in terms of access to cross-border healthcare and its refunding, with the European Commission having just adopted its report on the functioning of this directive on 4 September 2015. Although the directive was transposed almost two years ago (October 2013), a majority of European citizens (9 out of 10) have not been informed about treatments which may be reimbursed in another Member State, according to a 2014 Eurobarometer.

Lydia Mutsch regretted the fact that the implementation of this directive, which is "important for mobility and patients' rights", was proceeding "more slowly than hoped". Yet, "each citizen of the European Union is a potential patient, likely to require appropriate good quality healthcrare in due course, and, in some cases, these treatments are to be found on the other side of the border!", explained the Minister, calling to mind that Luxembourg was at the top of the list of countries with a high level of outgoing patient flows and that it was important to understand the nature of these flows in order to make the appropriate political decisions.

Thus, in order to guarantee citizens with equal access to high quality healthcare and improve patient moiblity, the Ministers discussed the need to better inform patients, and cooperate more closely between Member States, especially in the field of rare diseases and e-Health.

Another matter on the meeting's agenda is that of trans fatty acids which causeheart disease but which are not subject to European regulation, whereas the United States has decided to ban artificial trans fatty acids within three years. The Ministers agreed to ask the Commission to publish the report about the content of these acids without delay, indicated Lydia Mutsch. They also discussed how to inform consumers about the presence of these substances in food. According to Lydia Mutsch, countries are divided between those which favour European regulation with a view to defining a maximum limit and those which prefer a "voluntary approach" based on "cooperation with the food industry", which would undertake, on a voluntary basis, to reduce the maximum limit of trans fatty acids in a food item.

The Commissioner Vytenis Andriukaitis indicated that, for him, the Commission's report, which should be presented "in the coming months, provides for several options: compulsory labelling, the definition of legal limits and a voluntary approach.