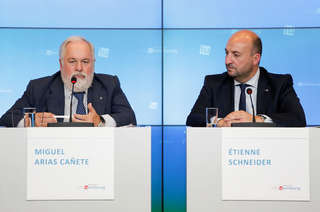 European energy transition and the potential of new energy technologies were the main items on the agenda at the informal meeting of Energy ministers held in Luxembourg on 23 September 2015. Additionnaly, around 500 experts had met for the SET Plan conference (Strategic Energy Technology Plan), which addressed research and innovation in the field of strategic energy technology.

The discussions at the informal meeting focused on three issues: economic growth offered by European energy transition, possible synergies between energy and development aid and investment in the energy sector.

At a press conference held at the end of this informal Meeting, the Deputy Prime Minister and Minister of the Economy, Étienne Schneider, who chaired the meeting, confirmed that there is "a lot to gain" from growth and job creation" in the energy field. He emphasised that the energy system of the future will have to be based on renewable energy, energy efficiency, smart and flexible infrastructures and technologies and on the increasing sustainability of our transport systems.

To boost exchanges during the informal meeting, the Minister invited several international experts, innovators and pioneers who are seeking innovation in the energy sector. Among those who spoke on issues relating to energy transition was Elon Musk, co-founder of projects such as SpaceX, SolarCity and PayPal and CEO of Tesla, which has become a global benchmark in the construction of high-end electric cars. He was joined by the American economist and sociologist, Jeremy Rifkin, and Bertrand Piccard, a Swiss pilot and co-founder of "Solar Impulse", a project which seeks to promote renewable energy by travelling around the world in a solar-powered aircraft. For Etienne Schneider, these company leaders "provide living proof that energy transition is the driving force behind economic development, and not an obstacle".

Another topic on the agenda was energy within the context of development. Development aid can help a billion people who have no access to electricity to leap over fossil fuels and move directly to a cheaper, cleaner and better energy adapted to local conditions, explained Etienne Schneider. Adnan Z. Amin of the International Renewable Energy Agency IRENA and Jean-Louis Borloo, who chairs the foundation ‘Energie pour l’Afrique’, shared their experiences.

Replying to a journalist, Etienne Schneider said that, during the informal meeting, the speakers "highlighted the huge economic potential in Third World countries"; but they also pinpointed "the huge risk" that people from this continent may decide one day "to seek a better life elsewhere". Hence the need to help them to advance by providing them with "easy access to energy", especially electricity. "This is a win-win situation, because investments in such regions may also enable European investors to benefit economically", said the Minister. Etienne Schneider also stressed the importance of "linking more closely" the development and energy policies.

Ministers also held discussions on the issue of investment in energy. They stressed the need to ensure that the Juncker investment plan helps boost investments in the energy sector.

The European Commissioner for Energy and Climate, Miguel Arias Cañete, underlined the importance of investment in the energy sector.To achieve the climate goals set by the EU for 2030, 200 billion euros must be invested per year, stated the Commissioner, who lamented the lack of investment, particularly in the energy efficiency sector. "To reach our target of 27%, 100 billion per year should be invested, but just half that amount has been invested so far", he said, adding that those responsible for small projects often have difficulty gaining access to substantial funds.

Replying to a question from a journalist on the new SET-Plan adopted by the European Commission on 17 September 2015, Etienne Schneider said that, during the discussions, the ministers realised that the EU has always held a "competitive advantage" in terms of energy transition, but that "a close eye must be kept on other countries such as the United States, who are just behind us". "If we do not agree to genuinely pool all our resources and to invest them more effectively, we will lose this race", he warned. For him, the conclusion drawn by the Energy Ministers is that "we really need a concerted effort in order to progress in this area".

Miguel Arias Cañete welcomed the fact that Member States "were becoming more involved". He said the Commission had consulted them in order to establish the ten priorities of the plan in a bid to ensure transparency and enhanced cooperation "from the bottom up".

Etienne Schneider also stated that the conclusions on managing energy will be communicated after the "Transport, Telecommunications and Energy Meeting" to be held on 26 November 2015. He added that the Luxembourg Presidency "is optimistic about reaching an agreement on strong governance" at this meeting.