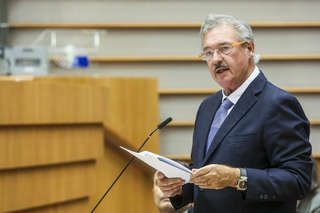 On behalf of the Luxembourg Presidency of the Council of the EU, the Minister for Immigration and Asylum, Jean Asselborn, addressed the plenary session of the European Parliament in Brussels on 16 September 2015, during a debate on the outcome of the extraordinary Justice and Home Affairs Council (JHA) meeting on the refugee crisis held on 14 September 2015.

The meeting, which did result into Presidency - and not Council - conclusions, saw a large majority of Member States agree in principle on the proposal to urgently relocate 120,000 persons in need of international protection. But no consensus had been reached.The European Commission's proposal, which foresees a mandatory quota system for relocating asylum seekers - who arrived on European soil via Greece, Italy and Hungary - in other Member States, has given rise to opposition from several countries, namely those known as the"Višegrad Group" (Hungary, Poland, the Czech Republic and Slovakia).

The European Parliament will vote its opinion on the relocation mechanism for 120,000 persons on 17 September

At the opening of the debates, the President of the European Parliament, Martin Schulz (S&D), proposed to fast-track the new mechanism for relocating 120,000 persons urgently. In their conclusions on the last extraordinary JHA meeting, the Commission and Luxembourg Presidency have in effect called on the Parliament to state its opinion on the proposal "at the earliest opportunity", whilst the procedure chosen for the mechanism requires the Council to await consultation from MEPs before giving a ruling.

The proposal for a summary vote, supported by the European Parliament's President of the Civil Liberties, Justice and Home Affairs Committee (LIBE), Claude Moraes (S&D), has been approved by MEPs. They will vote on the matter on 17 September.

A "decisive" milestone reached with the adoption of the decision to relocate 40,000 persons, says Jean Asselborn

Addressing MEPs, Jean Asselborn explained that the Luxembourg Presidency had summoned the extraordinary JHA Council of 14 September, "owing to the deterioration of the refugee crisis in Europe throughout the summer months". "The scale of the challenge we are facing requires a common European response", he said, noting that it was necessary to "immediately respond to the humanitarian situation in the short term and to the needs of a comprehensive and coherent EU migration policy".

In this regard, the Luxembourg Minister underlined that a "decisive milestone" had been reached at this Council with the final decision to put the political agreement in place which was obtained during the previous extraordinary JHA Council meeting of 20 July 2015 on relocation within the EU of 40,000 asylum seekers that had arrived via Greece or Italy, as proposed in the European Agenda on Migration submitted by the Commission in May 2015.

Referring to the conclusions adopted by the Presidency "following in-depth discussions" on 14 September, Minister Asselborn stressed that "since a large majority of Member States had agreed to press ahead with" the relocation proposal for 120,000 persons, the Presidency had convened an additional extraordinary session of the JHA Council for 22 September. "The negotiations on relocation will not be easy for the Council", the Minister noted however, announcing that Hungary had expressed its refusal to be considered a frontline country and benefit from the solidarity mechanism.

Within this context, Jean Asselborn repeated that the Commission's proposal package of 9 September formed "the basis" for work to be carried out immediately and that the Council would also start work "from tomorrow" on the permanent relocation mechanism and on the European list of safe countries of origin. The Parliament will act as co-legislator for these two subjects. "From our side, we are ready to make every effort to begin considering these proposals as soon as possible. I am sure that the European Parliament is as determined as we are".

The Minister then summed up the main parts of the conclusions. The first related to the decision to reinforce support for the United Nations High Commissioner for Refugees. The Ministers also underlined the importance of effective border controls, and agreed on the deployment of Rapid Border Intervention Teams on the ground (so-called "RABITs"). "We should reply positively to sending human and material resources on the ground as soon as we receive requests in this regard", stated the Minister, particularly with regard to the case of Greece.

The Ministers also emphasized that the return and readmission policy are of primary importance, while on the international level, they consider "vital to step up cooperation with third countries of origin and transit". The Valetta Summit, the conference on the migratory challenges posed by the Western Balkans route and the Niger pilot project "are specific initiatives that should continue to rapidly move forward in order to bring about the desired results", said Jean Asselborn. And, "it goes without saying", that all these measures should be accompanied by "a suitable budget and substantial human resources".

Expressing "dissatisfaction" with the results of the latest JHA Council, Jean Asselborn said he wants the next meeting called by the Presidency to be "decisive"

In reply to speeches by MEPs, the large majority of whom regretted the lack of a decision at the Council and called for urgent European action, Minister Asselborn stated that he was "not satisfied" with the latest results. "This is why I have decided on behalf of the Presidency to impart fresh impetus, and which must be decisive", he said. The fact that no formal decision had been taken during the meeting was "out of respect for the treaties and the European Parliament", whose opinion is required for the Council to vote. "I hope that on the 22nd we will not need to vote, and the Presidency will do everything to reach an agreement by consensus", he nevertheless indicated.

He pointed out that "all those knocking at our door and who are being pursued have the right to benefit from the application of the Geneva Convention rules". He also believed that the EU would lose "all its credibility if it closed its eyes". According to him, the Commission had, in this context, done a "splendid job", with a "very tangible" proposal. "I would like to see in the EU in 2015 the same zeal and great solidarity that was shown between East and West and South and North during the Yugoslavia crisis", he added.

Jean Asselborn also felt that  "we have no right" to lose the Višegrad Group states along the way, by risking failure "in the face of the historic challenge confronting Europe". "We must do everything to change the approach in these countries", so that they understand that the "hundreds or even thousands of refugees fleeing the misery and brutality in Syria are not the elements who penetrate society in these countries to break them down", the Minister continued. "It is perhaps difficult to explain but patience and a certain degree of firmness are needed to speak to these countries' leaders and peoples".

From here until the next extraordinary Council meeting, the Presidency "will listen" and "work together with the 28 Member States", Jean Asselborn added, explaining that he did not "entirely agree" with those who believed that the European Council had to come up with the solution. "We must remember the last summit in June, and bear in mind that since Lisbon, the Council of Ministers must be allowed to pursue its work. We failed on Monday, but we will set matters right, at least concerning the 120,000", he added.

Speaking on behalf of the Commission, the European Commissioner for Migration, Dimitris Avramopoulos, expressed the view that the debate represented an important signal sent to the Council, in "sending a strong political message" ahead of the extraordinary meeting. On the proposal for the relocation of 120,000 persons, he repeated that the "hoped-for agreement" had not been achieved, but highlighted the will of a "majority of Member States - although not all" in moving forward, and thanked the Luxembourg Presidency for its efforts to reach a compromise.

"We cannot allow ourselves to fail", he said, before highlighting that the meeting on 22 September would be "crucial" in this regard. "The Commission's goal is to maintain the unity of Europe", he added, and the institution "will work in order to make everyone move a step further" towards a solution. "With your support and the excellent work of the Luxembourg Presidency, we will all take this additional step in unison", he concluded.