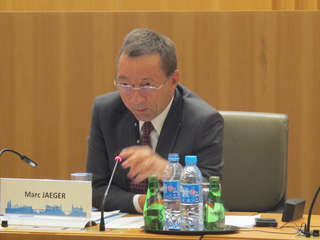 During the second day of the conference on EU citizenship and justice organised by the Luxembourg Presidency at the Court of Justice of the European Union (CJEU) on 15 September 2015, the President of the General Court of the European Union (EU), Marc Jaeger, discussed the particular role of the judge in the construction and development of the concept of European citizenship. In his closing speech, Jörg Gerkrath, Professor at the University of Luxembourg, put the issues discussed during the two days into perspective.

By way of an introduction, Marc Jaeger recalled that the concept of European citizenship had been introduced by political powers and that the status of 'European citizen', introduced by Member States, had 'gone beyond the economic logic behind the European construction from the ECSC Treaty in 1952'. The speaker stated that judges seized upon the concept of citizenship in order 'to make it a reality and to give it precise scope, thereby guaranteeing the nationals of Member States the rights associated with this citizenship'.

The notion of European citizenship covers three aspects, stated the President of the General Court: 'citizenship and mobility' on the one hand, 'political and administrative rights', on the other, and, lastly, the 'rules on judicial cooperation in civil and criminal matters'.

Regarding citizenship and mobility, Marc Jaeger stated that by making European citizenship 'the fundamental status of nationals of Member States', the Court had built a European area of social and corporate solidarity while maintaining the identity of citizens and guaranteeing the protection of family members.

So far as concerns social solidarity, Marc Jaeger noted that the Court recognises a 'certain degree of financial solidarity between EU citizens beyond its borders' but that it was, however, 'neither absolute nor unconditional', the Court having clarified that the beneficiary must not become an 'unreasonable burden on the public finances of the host Member State'.

Social solidarity emerged from the interpretation of the concept of the right to permanent residence, recalled the President of the General Court, stating that the case-law had established a European social solidarity space which 'makes all Member States responsible for our common well-being'. But it is not an absolute principle, he continued.

With regard to the protection of the identity of citizens, the Court will guarantee the protection of identity when citizens cross borders, while maintaining the balance between the citizens' interest as private individuals and the public interest of Member States.

Regarding the protection of family life of EU citizens, the Court also seeks to promote the balance between protecting the rights of citizens and respecting Member States' powers in respect of the immigration of citizens from third countries, observed Marc Jaeger.

But the concept of citizenship and mobility applies only to those who are on the move within the European Union (approximately 15 million citizens), he said. Nonetheless, others are entitled to different rights by virtue of their status as European citizens: political and administrative rights which make citizens 'political players in European integration'. It is a question of the right to vote and to be elected in the European Parliament, the right to petition the European Parliament (the oldest of all political rights granted to citizens, dating from 1952), the European Citizens' Initiative, enabling a minimum of 1 million citizens from at least a quarter of EU Member States to invite the European Commission to submit a legislative proposal and, lastly, the right of access to the European Ombudsman, whose jurisdiction covers poor administration of EU institutions, bodies and organisations, recalled the President of the General Court.

But EU judges are not alone when it comes to defining and protecting the rights associated with EU citizenship. 'National judges implement this protection on a daily basis', stressed Marc Jaeger, especially in the context of the rules on judicial cooperation in civil and criminal matters, he said.

In conclusion, the President of the General Court referred to the current refugee crisis, saying that it was striking that the Union, 'after having developed this status, which includes a range of rights and benefits', was facing a 'much more basic but imperative challenge'. 'I believe that it is essential to ensure that these people from outside the EU have the right to life, the right to liberty and security, while ensuring respect for human dignity with regard to the reception of refugees seeking asylum in the territory of our Member States', he concluded. 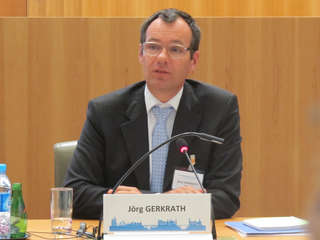 Jörg Gerkrath, Professor at the University of Luxembourg, then concluded the session by putting into perspective the discussions held over the course of the two days. First, the speaker addressed fundamental rights which, according to him, are inseparable from the concept of Union citizenship and justice. Even if they were not included in the title of the conference, a fact which he lamented, they were present in the background throughout the discussions, he said.

The Professor also noted that the concept of European citizenship, the foundation of which dates back to 1950 and on the basis of which a 'more significant structure was built from 1992-1993 onwards', was a 'good example of the changing nature of EU law'.

With regard to the status of 'European citizen', Jörg Gerkrath stressed that if it is the nationality of a Member State which guarantees European citizenship, it was increasingly necessary, at least in respect of citizenship and mobility, to 'exercise the freedom of movement for this potential right to become genuine'. It is therefore a status that is 'destined to become the fundamental status of European citizens', he said, adding that it was not yet a reality.

The speaker then addressed the specific situation of third-country nationals who are family members of EU citizens, indicating that a 'dispute' had ensued because it involved 'tackling the stringent and restrictive rules in Member states'.

How then can we ensure the protection of fundamental rights in the context of judicial cooperation? Is a citizenship of dispute about to appear? asked Jörg Gerkrath. 'There is a a field of application of the Charter of Fundamental Rights of the EU that needs to be developed', he said, adding that 'we need a European area of human rights to supplement the area of freedom, security and justice, which will someday be at least as integrated as the latter'. The speaker again addressed the role of national judges who 'must ensure that the different sources of fundamental rights available are harmoniously integrated into the European area of fundamental rights'.

Finally, Jörg Gerkrath spoke about the duties of European citizens, especially the 'duties to integrate and to participate'. And to cite paragraph 6 of the Preamble to the Charter of Fundamental Rights: 'Enjoyment of these rights entails responsibilities and duties with regard to other persons, to the human community and to future generations'. 'Today, our first duty is to be supportive of refugees seeking shelter with us', he concluded.