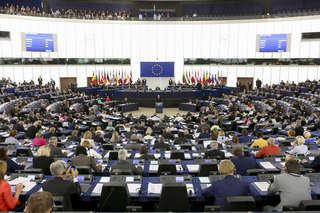 Nicolas Schmit, the Minister in charge of relations with the European Parliament during the Luxembourg Presidency of the Council of the EU, has welcomed the "important" contributions and initiatives put forward by the President of the European Commission, Jean-Claude Juncker, during his speech on the state of the Union before the European Parliament which met in plenary session on 9 September 2015. "It is time for courageous, innovative and exceptional action to be taken", declared Nicolas Schmit, speaking at the end of the debate which followed Jean-Claude Juncker's speech.

In his address, Jean-Claude Juncker called, in particular, on the 28 EU Member States to reach an agreement on the Commission's proposal on the urgent relocation of 160,000 refugees during the extraordinary Justice and Home Affairs (JHA) Council (JHA) convened by the Luxembourg Presidency of the Council of the EU for 14 September 2015.

This proposal, which was to be presented in detail by EU Migration Commissioner, Dimitris Avramopoulos, a little later on in the day, consists of a previous proposal for the temporary relocation of 40,000 persons in relation to which Immigration Ministers had difficulty reaching an agreement during the JHA Council on 20 July 2015, as well as a new urgent proposal to accommodate 120,000 persons currently in Italy, Greece and Hungary, as specified in a press release issued by the European Commission. Among other things, the Commission proposes to set upa permanent relocation mechanism, a common European list of safe countries of origin, as well as a European Trust Fund for Africa with EUR 1.8 billion.

Nicolas Schmit expressed his gratitude to Jean-Claude Juncker for his "insightful analysis" of the situation, and for his vision of what is at stake for the Union. He recalled a "truly historic" moment, drawing a comparison with "the fall of the Berlin Wall and the reunification of the European continent".

He concluded that "Europe must tackle a major crisis which demands a true capacity for action, genuine political will, and a level of solidarity that characterises the European spirit". He believes that the Union is going through a "critical period" caused by the refugee crisis and other "recent developments" the scale of which "challenge our values" and "put strain on our instruments and rules".

Nicolas Schmit then highlighted measures taken by the Luxembourg Presidency of the Council of the EU to set up a temporary and exceptional mechanism for the relocation and re-settlement of refugees, a task which "has not been easy" and a measure which is not "sufficient" in view of the situation's development from July onwards, the Minister stated. "We need to go even further", he argued. In this context, he announced that new Council meetings "are expected". "We should all be aware of the urgency and necessity of pooling our strengths, and not becoming divided", he said, calling for "efforts from everyone". He took the view that "Europe is perfectly capable of managing this crisis if it acts in accordance with its values, if it steps up to the plate and if it is capable of demonstrating real and common political will".

In addition, the Minister stated that "youth unemployment should not be forgotten" and affirmed that the Luxembourg Presidency is abiding by the principle of strengthening the social dimension in Europe, as set out in its priorities. Nicolas Schmit also stressed the importance of maintaining free movement, as well as the importance of digital data which is going to "transform our labour market". In conclusion, he underlined the "main priority" of the Paris Climate Conference (COP 21) which will take place in December 2015.