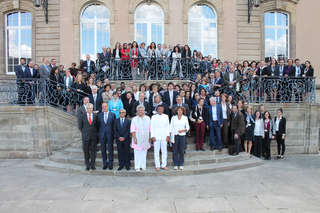 On 3 and 4 September 2015, the Luxembourg Presidency of the Council of the EU organized a conference in Echternach, entitled "Culture and development: towards a more strategic approach to cultural policies in the EU's external relations". The aim of the conference, which brought together around forty European and international speakers, was to give an insight into the way in which culture and development interact, and also to raise questions about the coherence of cultural policies and cooperation in development.

Strengthening the role of culture in EU external action

"It must be noted that there always seems to be doubts or some hesitation as regards the key functions of culture for human, social and economic development", expressed Luxembourg's Minister for Culture, Maggy Nagel, in her opening remarks. She recalled that one of the priorities of the Luxembourg presidency is to strengthen the role played by culture in EU foreign affairs and to defend, more generally, a more transversal view of culture. "It's about promoting more transversal and systematic integration of culture in other sectoral policies and, in this case, an acceptance and an approach that are more strategic of culture in the external action policy", she explained. In her opinion, development cannot be limited to just one ministerial department alone.

Maggy Nagel nevertheless stressed the importance of "the message" coming from the development cooperation sector, fully aware that "it takes two to tango".

Romain Schneider, Luxembourg's Minister for Cooperation and Humanitarian Action, stated that the Luxembourg Presidency has "a specific role and responsibility", given that it coincides with the European Year for Development. After calling for greater coherence in development policy, he emphasized the "strong link" which exists between culture and development, making it "an integral part" of cooperation and development "in all its forms".

However, according to him, culture also constitutes "a sector of intervention as such". As he views it, cultural industries and the creative economy may be considerable sources of revenue and economic growth for the countries that receive official development assistance.

"But it is an economic sector with potential which is all too often unexploited", said the Minister, before presenting a number of Luxembourg cooperation projects emphasizing the great interest in connecting culture and development.

In Cape Verde for example, culture and the creative economy have been identified as lasting pillars of development for the country. Luxembourg's Ministry of Culture invests heavily in the export of Cape Verdean culture and in the creation of intercontinental cultural platforms, particularly within the sphere of music.

Cape Verde's Minister for Culture, Mário Lúcio Matias de Sousa Mendes, is very happy with the cooperation. During his speech, he further called for a relationship of equals and put forward the following equation: Cooperation = giving + receiving + sharing.

The European Commissioner responsible for Culture, Educaction and Citizenship, Tibor Navracsics, stressed that culture was an "integral part" of the EU's work with regard to sustainable development. According to him, this allows to define policies locally, to take into consideration local specificities and to support local resources" and has "a crucial role to play in encouraging citizenship, good governance and democracy".

He mentioned that the Commission is trying to develop this aspect of its foreign policy, adding that culture can facilitate dialogue and improve understanding between people in situations where terrorism threatens to divide. The Commissioner, along with Federica Mogherini, High Representative of the Union for Foreign Affairs and Security Policy, wants to look at "ways of creating a European strategy for cultural diplomacy which would deepen and strengthen our foreign relations".

Referring to the destruction of cultural and archaeological sites in Syria by Daesh, Tibor Navracsics stressed the importance for the survival of the world's cultural heritage, by taking drastic measures for its protection.

Patricio Jeretic, an expert on cultural policy, stressed that "what's happening at the moment on Europe's borders", demonstrates "the urgency" of including culture in development.

Discussions on culture in the post-2015 development agenda were also dealt with in the course of the conference.

Romain Schneider was delighted that culture has "found its place" in the post-2015 development agenda, "as SDGs (Sustainable Development Goals) and in a more transversal manner, recognizing its contribution to sustainable development".

Culture is also tackled in the second key document for the post-2015 summit. "The Addis Ababa agenda which was agreed in July by all the States of the United Nations recognizes cultural heritage, innovation, knowledge and traditional practices, as well as cultural expressions of local peoples and communities as contributing to social well-being and as a means of sustainable existence", the Minister outlined.

Romain Schneider nevertheless bemoaned the fact that during the negotiations for the post-2015 development agenda, culture was sometimes "used" and "cited" as "an argument for blocking the achievement of other essential goals" and as "an instrument to counter the universality of human rights". He believes that diversity and cultural rights "are fundamentally grounded in human rights".

Given the regrets expressed by numerous speakers indicating that culture was not the object of an SDGs as such, Martine Schommer referred back to the importance accorded to culture in the policy statement which precedes the SDGs. This, according to her, is "more wide-reaching and operational, even if it is not linked to precise indicators".

"I have enough political years behind me to not get impressed by political statements or texts", said the Luxembourg MEP Charles Goerens (ALDE), who believes culture occupies "an extremely mediocre position" in the post-2015 development agenda.

Maggy Nagel concluded that the debate showed the need "to put a political vision at the heart of the culture and development strategy by coming up with a European process for this topic, or on the link between culture and external relations". She also claimed "that there is a need to systematize the co-construction of strategies and programs with partners and those who receive" development assistance.

As for the SDGs, "although views diverge somewhat on the exact place of culture in these, it is worth noting that Member States and the EU are making sure that they continue to improve the position of culture in the post-2015 development agenda and that they identify ways of ensuring its survival", explained Maggy Nagel.

"I believe the debate has to continue, and for the Presidency, this will be the case as we will bring it to Brussels, hoping to be able to do our little bit to make some progress", she concluded.