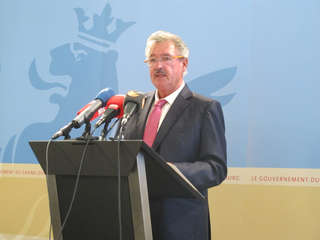 The Luxembourg Presidency convened a special "Justice and Home Affairs Council" (JHA) on 14 September 2015 to discuss strengthening the European response to migratory pressures that have been exacerbated these past weeks. On 31 August 2015, the Minister for Immigration and Asylum, Jean Asselborn, explained at a press conference in Luxembourg the reasons for which the Presidency is organising the special Council.

"Europe is currently exposed to an unprecedented migratory pressure", stated the Minister. In July alone, 31 591 Syrians have requested international protection, he stressed, citing the European Asylum Agency (EASO). He added, relying on numbers provided by the European agency Frontex, that between the beginning of the year and 14 August, 264 500 persons have crossed the Mediterranean, of which the vast majority landed in Greece (158 456) as well as in Italy (104 000). Jean Asselborn further underlined that Turkey alone has welcomed 4 million refugees and that this country should be provided with assistance.

"There is no national solution, it can only be a European solution", stated the Minister, calling upon the Member States to comply with their international obligations. "According to the Geneva Convention, the door must be opened to those who are in need of international protection and not leave them facing barbed wire fences", he stressed, referring to the barrier erected by Hungary along the 175 km of its border with Serbia. At the same time, it is also necessary to organise the return of persons who are not entitled to such protection, he added.

The Minister evoked the potential scenario "of refugee camps" in Europe. "It is still better than those States which erect barbed wire fences along their borders and thus violate the Geneva Convention and international law", he stated. The Minister also deplored that there are "such major limitations" to the voluntary solidarity between the Member States.

"It is above all war and poverty which impel people to leave", stated the Minister, pointing out there are two types of migrants : those who indeed need international protection because they are fleeing from a war, and those who are seeking to escape from poverty, known as "economic migrants". This is a distinction that has been "drawn at the European level" and is one that the Luxembourg Presidency "must accept", advised the Minister.

Jean Asselborn also referred to the "secondary movements" of migrants who have been registered in a State but who wish to "promptly leave those States" so as to travel to other States. The Minister identified Germany, Sweden, the Netherlands and Switzerland as target destinations, specifically because of their economic situation, the rate of approvals for refugee status applications and the length of the process.

According to him, the current Dublin system is "called into question". "In the wake of several judicial decisions, Syrians may no longer be sent back to Greece or to Hungary. But if this upheaval continues, it will become increasingly difficult to ensure compliance with Dublin", he explained, cautioning that the Schengen space may be called into question. In the context of the aborted attack on the Thalys train linking Paris and Amsterdam on 21 August, Minister Asselborn also urged that migration policies should not be confounded with terrorism.

The Minister likewise pointed out that of the priorities at the European level, the first is to continue to save lives. Jean Asselborn commended the work carried out to date and in particular the maritime equipment that has been made available by more than fifteen Member States.

The Minister of Immigration also emphasized the need for implementing  reception facilities and first reception (known as "hotspots")in the transit States as well as the front-line Member States. These mechanisms which are aimed at registering, sorting and providing a dignified reception, to accelerate the processes and where applicable, to proceed with repatriation operations, "must function", he said, which is the case in Italy, but not in Greece. "We must be in agreement in Europe on the fact that the people arriving need to be registered", continued Jean Asselborn, noting also that such hotspots could prove to be useful in Serbia and in Macedonia.

As regards the European list of safe countries of origin, Minister Asselborn disclosed that the European Commission will put forth a proposal in mid-September. "This is a good thing, but it will not resolve the problem", stated the Minister. In his view, a country whose admission to the UE is pending should be deemed as a safe country, "while being well aware that certain minorities must be treated specially". For Jean Asselborn, it would be helpful if the Member States could take a unanimous position with a view to harmonising their national lists of safe countries. In addition, the Commission should likewise, according to the Minister, work on facilitating the financing available for first-line countries by shortening the waiting periods and limiting administrative obstacles.

One of the principal challenges of the Luxembourg Presidency in this context will be the discussion of the sustainability of the mechanisms for resettlement and for relocation of refugees and asylum seekers in need of international protection and as to which the Ministers of Immigration experienced difficulties in reaching agreement at the special Justice and Home Affairs Council (JHA) of 20 July 2015. "Certain countries are in favour of a permanent system, while others oppose it, and there will be a major discussion in the coming months within the JHA Council", stated the Minister. Jean Asselborn also reckoned that it is necessary to guarantee the recording of decisions to repatriate within the Schengen Information System (SIS) and to discuss strengthening the mandate of the Frontex agency and the management of the EU external borders.

At the international level, the Minister reckoned that it will be very difficult to "manage the migration phenomenon" for so long as the terrorist organisation Da’esh remains active, and for so long as war continues in Syria and the region continues to be destabilised. "It is important to work in concert with the United Nations on the issue of managing the migratory phenomena", he continued, noting that a major debate on that subject will be held there on 30 September 2015.

For the Minister, it is also essential to speed up the dispatch of European liaison officers for "immigration" to the embassies of the non-Union priority countries, to develop the multi-purpose centre in Niger and prepare the summit meeting on migrations between the European Union and Africa at La Valette which will be held in Malta on 11 and 12 November 2015. "We should have a cooperative strategy with Africa which needs to be financial, but also more than that", stated Jean Asselborn, emphasizing the theme of readmission.

A high level conference is scheduled to be held in Budapest in October 2015 to discuss these problems with the Western Balkan countries and to analyse the reasons for the increased use of the so-called Balkan route as well as measures for supporting these countries. The Minister also highlighted the need for various institutions and agencies to work together (specifically Europol and Frontex) to analyse the secondary movement phenomenon.

Lastly the Minister hopes to close the ongoing negotiations with the European Parliament on the subject of the migrations, and specifically the proposal for a directive on researchers/students and the amendment of Dublin on the issue of unaccompanied minors as well as to discuss visa policies in the JHA Council in October.