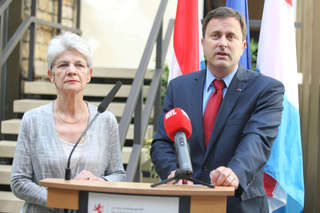 On Tuesday, 14 July 2015, Prime Minister Xavier Bettel received the Secretary-General of the European Trade-Union Confederation (ETUC) Bernadette Ségol in Luxembourg for a meeting also attended by Minister for Labour, Employment, and the Social and Solidarity Economy Nicolas Schmit as well as represnatives of the unions OGBL and LCGB. The discussions centred primarily on the priorities of Luxembourg's Presidency of the Council of the European Union (EU) as well as social issues and current affairs.

During the press conference following the meeting, Xavier Bettel began by pointing out that the social dimension would be one of the seven priorities of the Luxembourg Presidency for the following six months.

According to the Prime Minister, economic recovery in Europe is needed at this time. It is one of the "pre-requisites for recovery in the labour market and for the struggle against unemployment in Europe," he added, emphasising that the Juncker Investment Plan will play a very important part in this regard.

Both the Minister and the Secretary-General stated that they were in favour of a single market in which the Member States respect the social dimension. Within this context, Xavier Bettel cited Great Britain as an example of a state making decisions regarding the free movement of labour that "impinge on some red lines".

Afterwards, Xavier Bettel and Bernadette Ségol raised the question of social dumping, "a scourge that we must fight together". In this respect, Xavier Bettel made reference to some relevant projects that were completed by the Benelux Governments and which he believed could act as "pilots" for the 28 Member States to find agreement on.

On the subject of workers' rights, Xavier Bettel pointed out that they were a "European gain" and that it was important to make a "joint effort to maintain them".

The Prime Minister and the Secretary-General also  addressed the issue of the REFIT programme designed to simplify EU legislation and presented by the European Commission in October 2013. "We do not want a social deregulation programme", insisted Bernadette Ségol.

Digital Europe and future development of the labour market were another point on the agenda. As far as ETUC is concerned, "technological progress presents a problem for the EU and requires a lot of work to make this Digital Europe worker-friendly".

And finally, current affairs, such as the situation in Greece were at the centre of the discussion. Bernadette Ségol said that she hoped that the programme that had been "imposed" on the Greeks would help them "get out of the rut", a programme that she believed was similar to "austerity measures". For the Secretary-General, an "investment programme" was needed in Greece to "give the Greeks hope" and to "jump-start the economy".

At the end, Xavier Bettel announced that on 17 November, Luxembourg would host a conference with the 28 Member States' social partners to have an exchange of opinions on TTIP. "For us, TTIP is not a treaty that necessarily relinquishes the achievements we have had to fight for in Europe," confirmed Xavier Bettel, making reference to food security, environmental protection, established social or jurisdictional rights.

In conclusion, Bernadette Ségol stated that she had "high hopes that, throughout the Presidency, we will be able to have more of these exchanges, both on the realities of a Europe with a Triple A social rating, which is only slowly making its presence felt, and the issues of growth, employment and the slump in competition that European countries are currently experiencing".