The European eGovernment conference “Simple, secure and transparent public services” was a two-day event organised by the Luxembourg State IT Centre (Centre des technologies de l’information de l’État - CTIE) in the context of Luxembourg’s presidency of the Council of the European Union. It took place at the brand new "Maison du Savoir" in Esch-sur-Alzette, the main building of the Beval campus of the University of Luxembourg and brought together approximately 150 eGovernment professionals from very diverse backgrounds and from all over Europe. 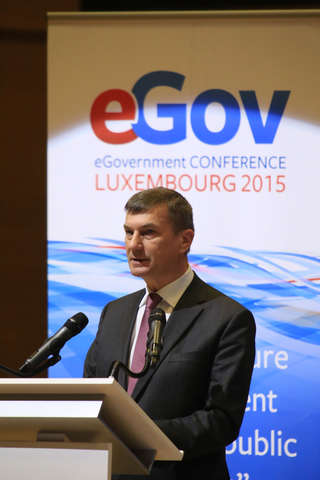 Andrus Ansip, Vice-President of the European Commission for the Digital Single Market, opened the conference the morning of December 1st 2015 by a committed speech in favour of a profound transformation of public administrations through the means offered by information and communication technologies, and via a better and more intense use of the tremendous potential of these technologies.

In the course of his speech, the Vice-President enumerated three fundamental principles leading the actions of the European Commission in eGovernment matters:

The conference offered a platform for European public sector organisations to share their projects, best practices and experiences in the eGovernment field, both on EU and Member State levels. Speakers who are acknowledged experts in their field presented key issues faced in European public administration modernisation. The panel discussions that addressed some of the hottest topics of the moment in the field allowed for multiple angles to be explored and diverse points of view to be expressed, and were to a large extent engaging, dynamic and controversial.

The agenda also gave participants plenty of time and opportunity to network, debate and exchange ideas during both the conference and the social events that took place in the context of the conference.