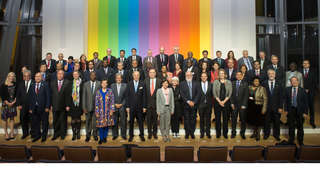 Representatives from more than 70 countries met in Paris from 8 to 10 November 2015 for the traditional Pre-COP event in order to identify a number of approaches in the light of a global climate change agreement to be adopted at the Conference on Climate Change in Paris at the end of November.

In addition to Minister Carole Dieschbourg representing the European Union alongside Commissioner Miguel Arias Cañete, the major emitters of greenhouse gases and a number of countries most vulnerable to the consequences of climate change, such as Bangladesh, the small developing island states and Niger, attended this last big meeting before the Paris COP21.

Minister for the Environment, Carole Dieschbourg, highlighted the intention of the European Union to adopt a credible and ambitious agreement, not limited to the lowest common denominator. She recalled in that regard that "there is much still to be done before COP21; we need to find common ground on key issues, such as financing developing countries, a long-term objective, and transparency of the agreement. Although these two days of talks have failed to remove obstacles, they have nevertheless set out the outline of what a future agreement would look like. We now need political leadership and a spirit of compromise."

During consultations held on the margins of the event, the Minister hosted several bilateral meetings, in particular with Canada's Minister for the Environment, Catherine McKenna, who called for a stronger commitment from Canada to COP21. Carole Dieschbourg stated: "I am delighted with this development and am counting on Canada - a very important player at global level - in order to reach an ambitious global agreement.