The Minister for Immigration and Asylum, Jean Asselborn, chaired the informal meeting of Ministers of Justice and Home Affairs (JHA) on 9 July 2015, which dealt with matters relating to migration. 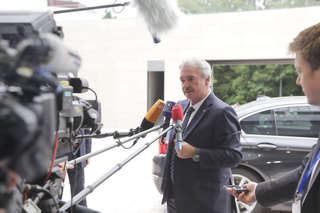 The focus of discussion included the migration crisis in the Mediterranean, the fight against human trafficking and the control and management of migratory flows. The discussions also addressed issues related to the relocation and resettlement of people to be protected in European countries.

The ministers began the informal meeting by following up on the EU action plan against trafficking migrants. The meeting took place in the presence of the United Nations High Commissioner for Refugees (UNHCR), Antonio Guterres, the Director of the International Organization for Migration (IOM), William Lacy Swing, as well as associated and candidate countries to the European Union and the relevant European agencies.

Minister Asselborn highlighted the importance of the topic by stating that "smuggling migrants claims the lives of many people and generates billions of dollars for criminals who breed corruption and strengthen organized crime. This has an impact on the countries of origin, transit and destination. He highlighted, among other issues, the need to strengthen national and European coordination and systematic cooperation with the financial intelligence units and European agencies.

The discussions helped to overcome the relocation target of 20,000 people in Europe, and ended with a thorough discussion of the internal aspects of asylum, particularly in terms of relocation. The Commission presented the state of progress of the hotspots and the financial aspects. "As regards relocation, the debate was complex, but the discussions were constructive and fruitful. "Much progress has been achieved today", said the Minister, assuring that an agreement would be reached before the end of July. He announced that an extraordinary meeting of the JHA Council would be held in Brussels on 20 July to finalize the work.

Press Release from the Ministry of Foreign and European Affairs.