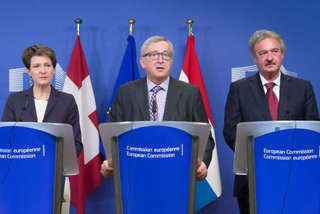 Luxembourg's Minister for Foreign and European Affairs and Minister for Immigration and Asylum, Jean Asselborn, representing the Luxembourg Presidency of the Council of the European Union (EU) attended the informal meeting, together with the President of the European Commission, Jean-Claude Juncker, and the President of the Swiss Confederation, Simonetta Sommaruga, in Brussels on 21 December 2015.

The meeting was held in the context of consultations undertaken by President Jean-Claude Juncker and President Simonetta Sommaruga following a popular vote on 9 February 2014.

By way of reminder: the Swiss people voted by a narrow majority against 'mass immigration'. The Swiss government thus committed to introducing quotas for foreign people, including cross-border workers. Consequently, it is necessary for Switzerland to renegotiate the Agreement which binds the two parties on the free movement of persons within the EU. The EU, however, refuses to call into question the principle of free movement which constitutes one of the fundamental freedoms and is a key component of the series of Swiss-EU bilateral agreements.

In order to find a solution, Switzerland and the EU agreed, in February 2015, to hold consultative discussions. Ten meetings have been held since then in the context of those consultations.

During the press conference which followed the meeting, the two parties stated that they had failed to reach an agreement on amendments to be made to the rules on the free movement of persons as desired by Bern, although 'some progress' had been made. A new EU-Switzerland meeting has been scheduled for the end of February.

Jean Asselborn stressed that over the past six months during which he has presided over the JHA Council, he has observed that 'Switzerland is not a xenophobic country' and that Bern has cooperated constructively on the issue of migration. For Jean Asselborn, the 'problem faced' is the need to find common ground between the outcome of the popular vote of February 2014 and the European principles of free movement and non-discrimination. He believes that 'achieving a mutually acceptable solution which respects the existing Swiss-EU Agreement on the free movement of persons is fundamental to maintaining a good level of global cooperation between partners'. And he urges the Netherlands Presidency to make 'this sensitive issue' a priority of the Council.

Jean-Claude Juncker stated that after 'ten rounds of technical consultations', no common ground had been reached with the Swiss authorities. Nevertheless, he clarified that 'significant progress' had been made since the beginning of the consultative discussions.

He stated that discussions had focused on Article 14(2) of the Swiss-EU Agreement on the free movement of persons relating to the application of the safeguard clause, which would enable Bern to derogate from free movement rules. Under that article, in the event of serious economic or social difficulties, at the request of either contracting party, the Joint Committee may take appropriate measures to remedy the situation.

By contrast, 'if an agreement cannot be reached with the EU', the Swiss Federal Council plans to introduce a unilateral safeguard clause, as stated in a press release issued on 4 December.

'The application of a unilateral safeguard clause is out of the question', declared Jean-Claude Juncker who believes that we must however talk about the criteria which attach to the application of the safeguard clause. 'We held intensive discussions, with regard to the Agreement on the free movement of persons, on the current interpretation of so-called 'serious economic or social difficulties', he stated, a priority area in terms of finding common ground.

In a press release issued on 21 December after the meeting, the Swiss government stated that 'if an agreement cannot be reached with the EU, Switzerland plans to act unilaterally to introduce a safeguard clause in the Foreign Nationals Act'.

The European Commission and the Swiss Confederation have set a new deadline of the end of February to reach a compromise.

Simonetta Sommaruga also observed that progress had been made on discussions, referring to 'a positive interim report'. She stated that 'the political will is there on both sides' and, moreover, in its press release of 4 December, the Swiss Federal Council stated that it will seek 'a mutually acceptable solution with the EU'. She stressed the need for the parties to reach a solution on a joint interpretation of Article 14(2) of the Swiss-EU Agreement on the free movement of persons. 'The baseline from which to find a solution has improved, but we still haven't reached a solution', she stated. The intensification of consultations demonstrates that the political will to reach a solution is there, stated the President of the Confederation, adding that there has not yet been a decisive breakthrough and that much work remains to be done by the two parties.