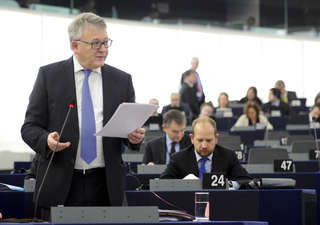 The agenda of the meeting of the Heads of State and of Government is 'very dense', continued Nicolas Schmit, adding that the European Council would address:

With regard to migration, the Luxembourg Minister took the view that the top priority was the implementation of measures already decided on. In particular, there is a need to overcome current deficiencies on the ground in relation to 'hotspots', relocations and returns, as well as to strengthen the protection of external borders in the Schengen area, so as to stem the tide of irregular migrants.'Maintaining the Schengen area, which must be our highest priority, means that we need to improve the management of the external borders', said Nicolas Schmit.

The Minister considered that continuing to cooperate with the countries of origin and transit was also crucial in operational terms as well as in order to deal with the root causes of migration. 'Within this context, the European Council intends to adopt conclusions on Syria, providing significant support for all the efforts to back a political process, but also expressing a will to fight all forms of terrorism', he said.

With regard to the fight against terrorism in particular, Nicolas Schmit emphasised that, following the Paris attacks, some measures had been adopted 'and they must now be implemented swiftly'. In his view, the most crucial aspects are deepening and systematically organising cooperation and the exchange of information between the relevant services. Against this backdrop, the agreement on European PNR (passenger name records), confirmed at the Justice and Home Affairs Council held on 4 December 2015, 'will play a crucial role' in the fight against terrorism, continued the Minister.

With regard to strengthening Economic and Monetary Union (EMU), Nicolas Schmit said that work had progressed well at the Council on the 'five presidents' report' submitted in June 2015. 'It is time for the European Council to lend a direction to future work', said the Minister. In his view, there is a need to 'rapidly clarify' various issues which are still the subject of dispute.

On the internal market, Nicolas Schmit noted that the Commission had recently submitted various communications and reports which would form the basis for discussions by the European Council. 'We need to strengthen and extend the single market in various spheres where there are still deficiencies', he added, pointing to goods and services and the digital internal market.

The European Council will also tackle the issue of  climate change, taking note of the agreement concluded at COP21 and mandating the Council and the Commission to evaluate its results, particularly in view of the framework for action on climate and energy by 2030. The European Council will, additionally, return to the issue of the energy union, with a view to a comprehensive debate next March.

Finally, on the issue of the referendum to be held in the United Kingdom, Nicolas Schmit said that after extensive consultations Donald Tusk, President of the European Council, had taken the view that this meeting was not 'the right moment for taking decisions'. 'This will provide the opportunity for a political debate on all the issues raised, and the form and content of any agreement will be decided at a later stage'.

Along the same lines, President Tusk told the Heads of State and of Government that the issue of sanctions against Russia as a result of the Ukrainian crisis had been placed on the agenda of a forthcoming COREPER (Committee of Permanent Representatives) meeting.

The Member States must do more, and act more quickly, said Jean-Claude Juncker

Jean-Claude Juncker, President of the European Commission, first of all returned to the proposal that the Commission had made the day before to create a European Border and Coast Guard. He called upon the Parliament and the Council of the EU to address this subject as a 'matter of urgency'. 'We have no time to lose with regard to preserving the Schengen area of free movement', he said, stipulating that effective management of the EU's external borders must be a priority, and that action must be taken collectively.

Confirming once again that the Member States would retain their areas of responsibility and their sovereignty with regard to their borders, Jean-Claude Juncker made it clear that the role of the European Border and Coast Guard would be to assess migratory flows across the whole of Europe, identify weak spots and call upon Member States to take appropriate action. 'The European Border and Coast Guard is not the answer to a new need. It is there to rectify the shortcomings of our Schengen system', said the President.

However, where urgent problems persist and no action is taken, the Commission will be able to take the appropriate decisions, together with the Member States, in order to intervene at the borders, the Commission President explained.

Jean-Claude Juncker again reaffirmed his position on Schengen: 'under my leadership we will do everything possible to protect what we have built - and to make it better and stronger', he said. 'Our determination is stronger than ever. Schengen is here to stay', he added.

The President also announced that the Commission had proposed strengthening the Schengen Border Code, so that every person entering the Schengen area, whether they are a European citizen or a third country national, would undergo a security check using national and European databases. He said that these checks would now also be mandatory when exiting the EU.

Finally, Jean-Claude Juncker announced that the Commission had adopted a recommendation on a voluntary humanitarian admission scheme for Syrian refugees who are currently in Turkey. 'If our neighbour is facing a humanitarian emergency, then we have a duty to help', he said, while making it clear that the proposal remained open to Member States on a voluntary basis.

On the matter of setting up and putting hotspots in Greece and Italy into operation, Jean-Claude Juncker recognised that some progress had been made, but that there was still work to be done. However, in his view, more time will be needed before 'every aspect of the situation is under our control'. But he added that 'we are moving in the right direction'. He called on Member States to do more, and to do it more quickly, to agree the list of safe countries of origin in order to increase the efficiency of the asylum system and to speed up the return of irregular immigrants, and to abide by the decisions taken regarding the African countries at the Valletta summit on migration held on 11 November.

With regard to implementing the European security agenda, Jean-Claude Juncker said that 'Europeans want to continue living in security in an area where free movement contributes to the way they live, study and work'. While protecting security remains a national prerogative, better coordination at European level is needed, including collaboration between the secret services, said the President. 'Terrorism knows no borders, and so our response must be global', he added, welcoming the agreement on European PNR.

Jean-Claude Juncker also called for 'the EU's legal arsenal relating to the prevention and punishment of terrorist acts to be adapted and intensified, also with regard to the financing of terrorist activities'. He said that this was the aim of the new directive on combating terrorism presented by the Commission on 2 December.

With regard to EMU and the internal market, Jean-Claude Juncker stressed the 'need to perfect our internal market where it is imperfect, and to complete it where it is incomplete'; in other words, to bring about the digital union, the capital markets union and the energy union. On this point, he welcomed the climate agreement reached in Paris on 12 December, which will make it possible to 'move forward on the targets set by the energy union, while boosting our financial contribution towards climate action in developing countries'.