The EU's Fisheries Ministers met in Brussels on 14 and 15 December 2015 for the "Fisheries" part of the last Agriculture and Fisheries Council chaired by Fernand Etgen, Luxembourg Minister for Agriculture. 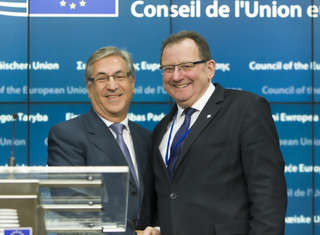 The Ministers agreed on the allowable catches for 2016 in the Atlantic and the North Sea and adopted a political agreement on fishing opportunities and quotas for next year in the waters of the Black Sea.

Fernand Etgen hailed a "strong and fair agreement" at the press conference held after the Council meeting. He added that "the agreement drawn up by the Luxembourg Presidency, in cooperation with the European Commission, is important both for the sustainability of stocks and the fisheries economy in the countries concerned", stressing that it is based on the scientific opinion of the International Council for the Exploration of the Sea (ICES), and that it is a compromise in line with the aim of the Common Fisheries Policy (CFP): fishing within the maximum sustainable yield.

The new CFP establishes that decision-making, such as fixing fishing opportunities must be guided, among other things, by scientific advice. Furthermore, it also aims to restore and maintain a maximum sustainable yield (MSY) of the fish stocks and provides for progressive elimination of all discards in all EU fisheries through the introduction of a landing obligation for all catches. European legislation establishes that the MSY will be applied to all fish stocks up until 2020.

2016 fishing quotas in the Atlantic and the North Sea

The EU ministers for fisheries agreed on the allowable catches for 2016 in the Atlantic and the North Sea.

They set the maximum quantities of fish from specific stocks which may be fished in the Atlantic Ocean and the North Sea (Total Allowable Catch - TAC) and the limitations in terms of fishing efforts (number of days at sea) for EU ships and international fisheries in which EU ships participate.

The European Commissioner responsible for fisheries, Karmenu Vella declared that "we are on track in our sustainability targets and the limits we set today give us a foundation for the next two years". "Whereas in 2010, only five TACs had been established by the EU at a sustainable level, there are now 36 in the North Sea, the Atlantic and the Baltic Sea", he announced, a figure that has remained stable in relation to the previous year. The Commissioner stressed the importance of not "jeopardising the longer term sustainability for the shorter term considerations".

On 10 November 2015, the Commission proposed to maintain or increase the fishing quotas for 35 stocks in the Atlantic and the North Sea, and to reduce the catches for 28 others. The Commission also suggested increasing fishing opportunities in order to help fishermen to adapt progressively to the new obligation to land all catches as of 2016. Under this obligation, all catches must be kept on board, unloaded and counted for the quotas. These additional quotas should compensate for the additional quantities of fish landed.

The agreement provides for increases in certain tonnages, with the approval of scientific experts, as is the case for northern hake and the horse mackerel from the waters of the Iberian and Western peninsula.

Karmenu Vella declared that "this is the proof that the management measures we have adopted in the past years work".

"On sea bass, we are building on the measures that we have put in place in 2015 both for the commercial and the recreational fisheries. We committed to measures that will be effective enough for sea bass, in an attempt to reverse the steep decline of this stock", he said. He noted that, in this regard, the lower impact of small fishing vessels, compared to large scale trawlers was taken into account.

The Commissioner continued by announcing that "we have also taken a big step towards the landing obligation for demersal fisheries. He added that "we have also ensured a balanced regime that rewards our fishing industrywith FAIR compensation for their efforts in landing all fish in a number of fisheries as of January next year".

Fishing opportunities in the Black Sea

The Ministers reached a political agreement on a regulation fixing the total allowable catches (TAC) and quotas for next year in the waters of the Black Sea, on the basis of a Presidency compromise, drawn up in agreement with the Commission.

The main element of the compromise is the roll-over in the EU total allowable catches (TAC) in the Black Sea for turbot and sprat.

Whereas the European Commission was envisaging a ban on turbot fishing in 2016, the Council decided to set the TAC for turbot at 86.4 tonnes, which corresponds to the volume agreed in 2015.

No fishing opportunities in the form of catch limits have been added for piked dogfish (Squalus acanthias) as originaly proposed by the Commission.

Finally, the Council accepted the Commission's figures regarding sprat catches. The TAC for 2016 is equivalent to that of 2015: 11,475 tonnes.

The Council and the Commission considered that in order to address the misreporting and illegal fisheries of turbot in the Black Sea, the implementation of control and monitoring measures established since 2012 should be further improved.