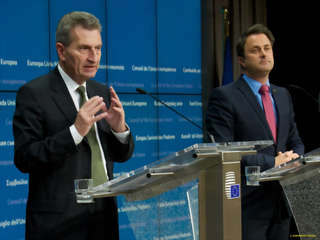 During the press conference following the meeting, Xavier Bettel's introduction focused on the entry into force of the open Internet regulation and the abolition of roaming charges. "This is a crucial step to complete the digital single market", he declared, while welcoming the abolition of surcharges by June 2017, and the inclusion of the principle of Internet neutrality in EU law. "With these two outcomes, we have managed to bring Europe closer to citizens and make the benefits of Europe more tangible for our citizens", he said.

The Luxembourg Presidency informed the Council of the informal agreement reached with the European Parliament on 7 December 2015 concerning the draft directive on network and information security.

The new directive will define cybersecurity obligations for operators of essential services and digital service providers. In concrete terms, the draft directive requires operators to take certain steps to manage IT cyber risks and report major security breaches. Member States will be required to designate national authorities and to establish strategies to address cybersecurity incidents. They will also step up their cooperation against cyber threats.

"This is a decisive step that will enable a coordinated approach to cybersecurity across Europe, by promoting cooperation between Member States and creating security obligations and notifications for stakeholders who provide key services for our economy and our society", stated Xavier Bettel. "I hope that the agreement reached will be subject to approval in Coreper next week", he added.

The Ministers held a policy debate on the forthcoming review of the EU's telecommunications regulations.  The Commission is expected to present its proposals in 2016 within the framework of a strategy for a digital single market, in particular to ensure better knowledge of the rules and improve the consistency and effectiveness of their implementation by Member States.

The questions drawn up by the Presidency in a briefing note focus on the top priorities of this review, new generation connectivity and equal treatment for equivalent services. In concrete terms, the Ministers have been invited to determine the best way to ensure that high capacity networks, both fixed and mobile, are also accessible in less densely populated areas. The Presidency has also invited Ministers to consider ways to ensure that equivalent communication services are treated as such, all the while maintaining a high level of consumer protection.

Xavier Bettel believes that the proposals that have been made by the national delegations have been "very fruitful" and have revealed there is "much in common". They highlighted how important it is that digital services do not develop "only in capital cities, but across the entire country", and the importance of finding "the right balance" in terms of regulation, knowing that "too much regulation kills regulation". "And we are all agreed that it will be necessary to consider the ubiquity of the Internet, which changes the game plan", added the Minister.

"This sector, which previously was limited to the field of telephony, will now become a key player in the digitisation of our society, our economy and our industries", declared Günther Oettinger, European Commissioner for Digital Economy and Society, stressing the importance of modernising the regulatory framework for telecommunications. "It is about granting frequencies, spectrum coordination, the consolidation of the telecommunications market, and the implementation of smart regulation that gives the telecommunications sector the opportunity to invest in digital infrastructure, broadband for the future, satellite technologies, fibre to the home and the fifth generation mobile communications", he added.

The Presidency presented a progress report on the work concerning the rules proposed to facilitate access to public sector websites.

Xavier Bettel was pleased that "all the Member States shared the desire to ensure accessibility of public sector websites to people with disabilities".

For the record, the draft directive aims at easier web use and better operational conditions for the websites of certain types of public sector organisations. Certain principles and techniques to facilitate the use of web content should therefore be applied when creating websites so that they are, for example, compatible with assistive technologies such as screen readers which transcribe the text using speech synthesis. For users who have difficulty using a mouse, it should be possible to browse the website using only the keyboard. The provision of sufficient contrast between the text and the background and allowing easy enlargement of the characters is vital for people with sight problems and can also improve browsing for all users.

The new rules will benefit all users, disabled or not, and encourage their participation in the digital economy.

Commissioner Oettinger added that holding the trialogue was imminent and that an agreement between the Council and the Parliament would surely take place next year.

Xavier Bettel informed the Council of an informal discussion about digital skills which took place the day before, on 10 December 2015, with Commissioner Oettinger.

The Ministers for Telecommunications and the Ministers for Labour, Education and Research were invited to the informal dinner in order to "discuss the transversal nature of the subject and the need to approach it horizontally, through all sectors, at all levels, and in all Member States", explained the Prime Minister. For him, e-skills are one of the "key factors for the competitiveness of business, for innovation and for employment" because digital services "change our society and economy, affect all policies and impact all of our businesses, from SMEs to multinationals".

Günther Oettinger for his part pointed out that continuous training in digital matters and the creation of university courses in electronics was of "crucial importance if Europe wants to remain competitive in the digital age". The Commissioner further stated that one in five Europeans has no digital skills and that one in three has only limited skills.

The Commissioner also informed the Ministers about ongoing negotiations as part of the Transatlantic Trade and Investment Partnership (TTIP) relating to telecommunications / the Information Society. In this context, Günther Oettinger assured those present that the regulations on copyright at European level would not be affected by the negotiations in the context of the TTIP, and neither would Europe's cultural and cinematic sectors, nor fixed book prices, which are important for certain Member States.

Xavier Bettel also said that he asked Günther Oettinger to make a proposal "in the near future" concerning geo-blocking. "When there are 28 of us and we speak of ONE Europe without borders, is it still acceptable not to be able to see one country's broadcasts when living in another country", he asked.

In response, Günther Oettinger said that the draft proposal made by the Commission on 9 December 2015, which aims to ensure cross-border portability of online content services in the Internal Market, is a first step in this regard. He announced that in 2016 the Commission intends to propose the widespread abolition of geo-blocking. "The digital internal market knows no national boundaries", he said, underlining the importance that, "to the greatest possible extent", all digital content should be accessible to all European citizens.