European Union (EU) Ministers for Transport met in Brussels on 10 December 2015 to discuss the Transport section of the Transport, Telecommunications and Energy Council (TTE). The Council was chaired by François Bausch, the Luxembourg Minister for Sustainable Development and Infrastructure.

The social aspects of road transport 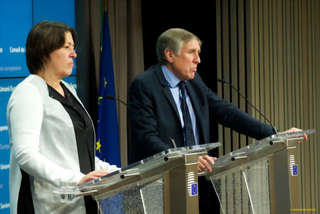 Ministers for Transport held a policy debate on the social aspects of road transport, the aim being to thoroughly discuss the views of Member States on the current legislation and the best ways to ensure its systematic application.

During the press conference following the Council meeting, François Bausch highlighted the importance of this subject, referring to the fact that 'almost three million people are employed in this field', and that 'for years, there has been some uneasiness within Member States in relation to the situation in this sector'. In his view, the social aspects of road transport are just as important to ensure the quality of jobs in that sector. And highlighting that the need for mobility and transport, notably road transport, will not diminish in the coming years.

The EU adopted a number of laws to improve road safety, ensure drivers' good working conditions and promote fair competition in the EU road transport sector. Common rules on driving time and rest periods of lorry and coach drivers cover both employees and the self-employed, engaged in international and/or national operations. These rules are supplemented by minimum requirements governing the working time of mobile workers.

To help to enforce the rules and monitor the driving times of professional drivers, vehicles have to be fitted with devices that record the driver's working time and rest periods (tachographs). Member States' authorities are required to carry out checks to ensure compliance with the rules.

International road transport services have been gradually liberalised in the EU. Any EU transport company in possession of a valid Community license has free access to the whole EU market for road transport. Common rules also regulate admission to the occupation of road transport operator in respect of both goods and passengers. EU rules governing temporary cabotage apply to both passenger services and freight haulage.

Despite a number of measures adopted to enhance compliance with the social rules in road transport, differences in national interpretation and enforcement of these rules persist, as indicated by the background brief of the Council. In particular, the number of infringements against the rules on driving times and rest periods remains high: 3.9 million offences were detected during the implementation period from 2011 to 2012.

'The systematic and uniform enforcement of these social and market rules is of significant importance for the good functioning of the road transport internal market', reports the Presidency in a report devoted to the subject. An insufficient level of compliance with existing rules would indeed lead to a degradation of the working conditions of road transport workers and would create distortions of competition between transport operators.

In this context, the Commission intends to introduce new initiatives in the field of road transport in 2016, aiming in particular to ensure a better understanding of the rules and to improve the consistency and cost-effectiveness of enforcement by Member States.

'The Luxembourg Presidency will bring together all the interventions made during this discussion and will put together a document that will be submitted to the Commission, so that all the points raised today can find their way into the road package next year', said François Bausch.

For Violeta Bulc, Commissioner for Transport, the discussions have highlighted the need for 'market opening' in road transport to go 'hand in hand' with 'progressive social solutions'. She indicated that the package to be presented by the Commission in 2016 will address market opening, social issues, and digitisation in the field of road transport.

'Currently, road safety figures are not very optimistic: not only have we seen a stagnation in terms of the decrease in deaths on our roads, but in many countries, there is even an increase in deaths', the Minister pointed out. 'Any detected disease that could result in tens of thousands of deaths annually would have immediately mobilised 100% of society, and we would have tried to promote research to defeat that disease. But in terms of fatal accidents on our roads, it seems that this mentality does not work', lamented François Bausch, citing the words of his Finnish counterpart during the Council meeting.

It was indicated that the 'mid-term review' which will be made by the Commission on the White Paper in 2016 will constitute 'a good opportunity to conceptualise road safety issues'.

Violeta Bulc highlighted 'new types of injuries resulting from greater mobility and greater use of bicycles, especially electric ones'.

The Council adopted at first reading its position on the three legislative acts that make up the technical pillar of the fourth railway package. These are directives on railway safety and interoperability, and a regulation on the European Railway Agency (ERA), which had been the subject of a trialogue interim agreement last June, during the Latvian Presidency. This agreement was approved by Coreper on 30 June 2015.

To conclude the procedure, these legislative acts must still be formally approved at second reading by the European Parliament.

The other proposals under the fourth railway package, which constitute the 'political' or 'market' section, are being negotiated with the Parliament, indicated the Council in a press release.

'It is likely that the whole package will be approved in spring 2016', said Violeta Bulc, after having praised the efforts of the Luxembourg Presidency in this case.

The Commission presented the aviation package called 'an aviation strategy for Europe'. 'We have had a short discussion on this issue', declared François Bausch, indicating that the future Dutch Presidency has made it a priority. Violeta Bulc stressed the importance of the European aviation industry remaining competitive and able to face global competition.

The Commission also informed the Council on the progress of work on transport security.

She also made a report on the status of the Energy Union. 'The Vice-President of the Commission, Maroš Šefčovič, showed us the relationship between the Energy Union and the initiatives in the field of transport. Important steps will be made in this field in 2016', said Violeta Bulc.

The Dutch delegation also informed the Council on the outcome of the investigation into the crash of flight MH17. 'Nothing new has been reported in relation to the causes that led to the crash', said François Bausch.