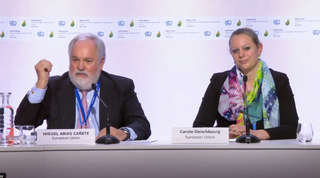 Five days before the end of negotiations at COP21, the Minister for the Environment, Carole Dieschbourg, who is representing the Luxembourg Presidency of the Council of the EU, and the European Commissioner for Climate Action and Energy, Miguel Arias Cañete, spoke to the press at a joint conference in Paris on 7 December 2015 to give an update now that the Ministers for the Environment of the 196 parties have taken over as technical negotiators for the second and final week of discussions.

The 21st Conference on Climate Change (COP21), which is being hosted in Paris from 30 November to 11 December, aims to achieve a universal and binding agreement on the climate for the first time in more than 20 years of negotiations in the United Nations, involving all parties with the aim of keeping global warming below 2 °C. The agreement will succeed the Kyoto agreement from 2020. After a first week devoted to technical negotiations aiming to limit the options on the table for policy makers, the Ministers for the Environment took over on 7 December to decide on the options available in the draft agreement.

All parties must be willing and open to reaching a compromise

'We have an opportunity to be history makers. To be the leaders that put the world on course to avoid dangerous climate change', said Carole Dieschbourg at the press conference, the Minister urging her counterparts to focus on their mission. It is also a matter of 'urgently putting the world on the path to climate-neutral, climate-resilient and stable development' and 'only a solid and ambitious deal involving all parties will do this', she pointed out.

The Minister gave a quick summary of the state-of-play in the negotiations, stressing the 'difficult' nature of this last week of discussions, as the draft text on the table leaves 'all major issues still unresolved'. Nevertheless, she said that she was 'confident' in getting a result that would rise to the challenges, 'if all parties show openness and willingness to compromise'.

Carole Dieschbourg also remarked that during the EU ministerial coordination earlier in the day, all Member States had confirmed their commitment to work towards an ambitious agreement protecting all countries against the impacts of climate change. She also urged European Ministers to take an active part in the process both within the Paris Committee and the sub-committees dealing with the more delicate issues.

According to the Minister, the new agreement 'is now within reach' and now needs a 'strong political will to achieve a binding global agreement applicable to all parties by the end of the week'. Commending the events organised as part of the Lima-Paris Action Agenda which have enabled the commitment of cities, companies and civil society in the fight against climate change to be seen, she pointed out that they had provided concrete examples of the 'vital role' that non-State players have to play in achieving the 2 degrees objective.

Carole Dieschbourg also noted that although the transition towards sustainable, climate-resilient economies 'will be a huge challenge', at the same time, 'it offers an opportunity to revitalise our economies and global stability and well-being', she said. In this context, she recalled that the EU in particular defends 'human rights', 'gender equality' and 'just transition' as 'principles that should guide the ambitious implementation of the agreement'. Furthermore, a strong deal on climate will also help achieve food security, one of the objectives in the 2030 Agenda for Development.

The Minister also highlighted the EU's experience in this area, which showed that it wasn't necessary to sacrifice economic growth in order to combat global warming. 'The whole world stands to benefit from the shift towards a global low-carbon economy', added the Minister, who also believes that now is the time to deliver.

The European Commissioner for Climate Action and Energy, Miguel Arias Cañete, repeated the three fundamental elements that the EU deems necessary for the success of the Paris Agreement: long-term quantified targets, based on the results of scientific research on climate; a review mechanism enabling a review every five years of the results achieved and tailoring action and objectives, taking into account technological and scientific advances; regulations on transparency and accountability, particularly in terms of comparable data on all kinds of efforts, while providing flexibility for developing countries.

According to Miguel Arias Cañete, there is a broad consensus on these three principles. 'But some countries would be gladly be content with a more modest project, arguing that too many ambitions could hamper their economic development', said the Commissioner, who doesn't agree with this theory. On the contrary, he believed climate ambition is conducive to growth. He explained that developing countries are only responsible for emitting 35 % of greenhouse gas emissions, and the EU only 9 %, the remainder coming from other countries. Furthermore, a minimal agreement will not enable the limitation on global warming by less than 2% to be achieved.

The Commissioner acknowledged that implementing national objectives, INDCs (Intended Nationally Determined Contributions), will demand great efforts on the part of some countries, in particular from developing countries. They will be supported by the EU to reduce their emissions which will make a big effort in climate finance.

Miguel Arias Cañete pointed out that the world will change in the period covered by the Paris Agreement, and as a consequence the economic classification of countries would too. Richer countries will be less rich, poorer countries will be less poor and developing countries will in time be counted among the highly developed countries. All those countries that will be in a position to do so should, after some time, support poorest countries. He noted that China and even Vietnam made announcements to this end, as the investments needed to be effective are huge. For the period 2015–2030 alone, 30.5 billion euros in investments are required.

For him, the private sector should also be responsible for cutting emissions. Regarding the adaptation to global warming, it is public finances that are put to the challenge. In short, it must lead to 'an enlargement of the donor base'.

Miguel Arias Cañete was convinced by the findings of scientific research that showed that greenhouse gases must be reduced by 70 % by 2050 compared to 2010. The EU plans to cut emissions by 95 %. But, according to him, a number of countries are 'reluctant' to accept that the agreement is based on scientific results and that it is ambitious. However, he believes that the ambitious objectives will encourage the development of new technology, and they should quickly become more affordable, as was the case with solar panels. And in this sense, the agreement could be a win-win situation if everyone accepts the ambitious goals and scientific results on which they are based.