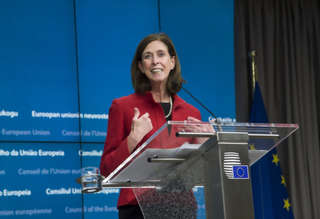 The Ministers for Health of the Member States of the European Union (EU) met in Brussels on 7 December 2015 for the last "Employment, Social Policy, Health and Consumers" (EPSCO) Council held under the Luxembourg Presidency. At the meeting, chaired by Lydia Mutsch, Minister for Health, the participants adopted conclusions on four issues: the EU strategy on the reduction of alcohol-related harm, personalised medicine for patients, dementia and lessons learned from the Ebola outbreak. Lydia Mutsch particularly welcomed the adoption of conclusions on personalised medicine and dementia, two subjects which are major priorities for the Luxembourg Presidency on public health.

EU strategy on the reduction of alcohol-related harm

The ministers adopted conclusions on the EU strategy on the reduction of alcohol-related harm.

Lydia Mutsch, who stressed during the press conference held after the Council meeting that alcohol abuse causes 3.3 million deaths per year globally, called for a 'cooperation framework between the Member States', given that the previous strategy expired in 2012 and the action plan will expire in 2016. 'The Luxembourg Presidency fully endorses the loud and clear message given by the Ministers for Health at the informal meeting held in Riga in April of this year, as well as the Council in June, and the European Parliament's invitation to adopt a new EU Strategy on alcohol from now to the end of the year', she said.

The strategy should tackle the health and socio-economic consequences of harmful consumption of alcohol, focusing on initiatives with a cross-border dimension, as set out in the conclusions. The Member States and the Commission are also invited to focus on the prevention of risk-laden drinking behaviour among young people and ponder the possibility of introducing ingredient labelling and a nutritional declaration, featuring in particular energy values, for alcoholic drinks.

Lydia Mutsch welcomed the fact that 'for the first time, a presidency succeeded in making progress on discussions on possible solutions and laying the groundwork for a European strategy on personalised medicine'. By adopting a patient-centred and innovation-based approach, personalised medicine will 'change prevention programmes against obesity and cancer and other rare or complex chronic illnesses', the Minister pointed out, adding that this medical model also facilitates 'the identification of a predisposition to a particular illness and targeted prevention'.

In their conclusions, the ministers invited the Member States to facilitate access to clinically effective and financially sustainable personalised medicine by developing patient-centred policies. However, Lydia Mutsch stressed that the 'integration of personalised medicine into clinical practice and day-to-day care is still difficult due to the many obstacles and challenges to timely access to targeted treatments'. In this context, she called on Member States to cooperate with a view to 'taking personalised medicine from a 'tailored' approach to a concept that is accessible to as many people as possible'.

The draft conclusions of the Council draw on the results of a high-level conference on personalised medicine, organised in Luxembourg on 8 July 2015 by the Luxembourg Presidency.

The Council adopted conclusions on dementia, the second major priority for the Luxembourg Presidency in the field of health. Currently, 47.5 million people around the world are living with dementia, including 6.4 million in the EU. 'With our ageing population, the figures will increase in the years to come, reaching 9 million people in the EU by 2030', the Minister stated, adding that this condition affects not only the patients, but also those close to them, and indeed society in general.

Lydia Mutsch called for 'stronger cooperation, emphasising the role of preventing risk factors, including secondary prevention, early diagnosis and adequate post-diagnosis treatment, in order to reduce the burden represented by dementia in an ageing population.

Thus, the conclusions invite the Member States to provide appropriate treatment and care for people living with dementia, their families and care staff, with the objective of reducing the stigma associated with dementia, promoting the exchange of good practices on the prevention, diagnosis and treatment of dementia, investing in research, adapting the role and training of formal and informal carers and, finally, ensuring adequate support for patients and those close to them. The Council Conclusions take account of the discussion held among the Ministers for Health during the informal meeting in Luxembourg on 24 and 25 September 2015.

Lessons learned from the Ebola outbreak

Finally, the Ministers adopted conclusions on a fourth subject: the lessons learned from the Ebola outbreak in West Africa for health security in the EU.

Lydia Mutsch began by pointing out that the Ebola outbreak cost the lives of 11,000 people, including 500 health professionals, and became a public health, humanitarian and socio-economic crisis.

The conclusions stress the planning and preparation and the response by EU Member States to serious cross-border threats to health and cooperation to strengthen health security in the European Union in the event of future outbreaks.

The draft conclusions draw on the results of the Ebola conference organised jointly by the Commission and the Luxembourg Presidency in Luxembourg from 12 to 14 October 2015.