EU Ministers for Employment, Social Policy Issues, Equal Opportunities and Health met in Brussels on 7 December 2015 for the last Employment, Social Policy, Health and Consumer Affairs (EPSCO) Council held under the Luxembourg Presidency. The session on employment and social policy was co-chaired by Nicolas Schmit, Minister for Labour, Employment and the Social and Solidarity Economy, and Romain Schneider, Minister for Social Security.

The European Semester and the strengthening of social governance

Ministers had an exchange of views on the documents submitted by the Commission within the context of the European Semester 2016 (the coordination cycle for economic governance in the EU) on the basis of a note from the Presidency. 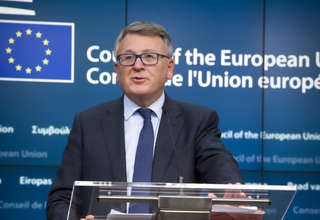 The European Semester 2016 opened, on 26 November, with the presentation of documents containing the 2016 annual growth survey, the draft joint employment report (JER) and the alert mechanism report (AMR). This time, the package also included the draft eurozone recommendation, which up until now had been adopted at the same time as the specific country-based recommendations in May or June.

The EPSCO Council approved the employment and social aspects of the draft eurozone recommendation. The recommendation will be adopted in 2016, after the economic aspects have been approved by the ECOFIN (Economic and Financial Affairs) Council and it has been endorsed by the European Council.

'If we want to strengthen the social policy dimension – which in my view could be seen as an absolute necessity – and if employment is to be considered a priority, then the EPSCO Council must play a full political role, as it is doing today', said Nicolas Schmit at the press conference that followed the Council. The Minister said that many delegations had stressed the need to 'give the EPSCO Council its full political role in the economic and social governance of the EU'.

'We are in the process of reworking the European semester, and in this context the Commission's proposals all go in the right direction', added Nicolas Schmit. In his view, the EPSCO Council should now deepen and broaden its work, in order to 'tailor itself to the expanded European semester'.

This process is part of the wider context of further developing EMU (Economic and Monetary Union) and improving economic governance, together with a social policy dimension that is more fully established. In this context, the Council adopted conclusions on social governance for an inclusive Europe. 'We have embarked on the re-balancing of governance that fully incorporates the social policy dimension', said Nicolas Schmit. 'We are not about to develop an additional approach, but rather to take the existing instruments and try to make the best possible use of them', clarified Romain Schneider.

Nicolas Schmit considered that deepening the integration of economic and monetary union must be achieved through better addressing issues relating to social protection and employment. During their lunch, the Ministers had an exchange of views on three topics relating to improving performance in the social policy and employment spheres: the Commission's recommendation on the creation of national competitiveness boards, the concept of flexicurity (flexibility and security) and the issue of how best to integrate the social policy dimension into governance.

On the latter topic, Nicolas Schmit said that 'the issue of the pillars of social rights, announced by the Commission, and the importance of social and employment indicators' had been mentioned by the various delegations 'many times'. 'We believe that integrating the three employment indicators [i.e. the activity rate, long-term unemployment and youth unemployment - editor's note] within the macro-economic imbalances procedure could be of benefit: it amounts to recognising that unemployment is a key macro-economic imbalance and that it should be treated as such', said the Minister. He stressed the importance of cooperation between the Council's ECOFIN and EPSCO configurations. The Minister also emphasised the need to take into account issues relating to inequality and poverty in the social indicators.

'In our alert mechanism report, in our analysis of macro-economic imbalances, we now place more importance on social indicators', said Marianne Thyssen, European Commissioner for Employment, Social Affairs, Skills and Labour Mobility, referring to the three indicators mentioned by Nicolas Schmit. 'These indicators will help us to better understand employment and social impacts and challenges', she said.

In relation to the national competitiveness boards, the Minister highlighted 'the rather negative positions' of certain delegations. He took the view that the boards 'ought not to interfere with the autonomy of the social partners', that they should not be able to issue binding opinions and that competitiveness was not merely a question of salary costs.

With regard to flexicurity, Nicolas Schmit considered that the 'security' aspect of it was widely neglected. Marianne Thyssen stressed the importance of finding 'the right balance' between security and flexibility in the context of labour market reforms.

The Council also adopted conclusions on the promotion of the social economy as a key driver of economic and social development in Europe.

It should be noted that on 4 December 2015 six EU Member States – France, Italy, Luxembourg, the Slovak Republic, Slovenia and Spain – had adopted the Luxembourg Declaration calling for more support for social economy enterprises within the EU.

In its conclusions, the Council calls on Member States and the Commission to develop European, national, regional and/or local strategies and programmes for enhancing the social economy, social entrepreneurship and social innovation.

The Council calls for more systematic promotion of taking social innovation into account, in European and national programmes, as a way of achieving better social outcomes. It stresses the need to continue to  develop an appropriate ecosystem for social economy enterprises at EU and Member State level. It also points to the importance of a tailored regulatory environment.

In the sphere of access to finance, the text stresses, in particular, the need to analyse which financial instruments are the most appropriate and promote their dissemination  at all levels in order to establish a comprehensive financial ecosystem and enable the development and growth of social economy enterprises. It calls for active use to be made of EU instruments, such as the European Structural and Investment Funds, the EaSI and Horizon 2020 programmes, and encourages mobilisation of private resources in equity or quasi-equity.

The Council invites the Commission to take into consideration social economy, social innovation and social investment policies when reviewing the Europe 2020 strategy and to support the dissemination of good practices in this regard.

Finally, the Ministers encourage social economy enterprises and social entrepreneurs to become actively involved in the development of European policies and strategies  promoting their sectors of activity.

Integrating the long-term unemployed into the labour market

Finally, the Council reached a political agreement on the recommendation concerning the integration of the long-term unemployed into the labour market, adopted by the European Commission on 17 September and presented on 5 October 2015 to the EPSCO Council.

Based on the model of the youth initiative (Youth Guarantee), the proposal for a recommendation aims to target a group that has been particularly badly hit by the economic crisis, namely long-term jobseekers aged over 30, or those aged between 25 and 30 who do not benefit from the Youth Guarantee.

The agreement recommends that Member States should encourage the registration of jobseekers with the relevant services and the introduction of integration measures more closely linked to the labour market, particularly through forging closer links with employers. It also stresses the need to provide registered long-term jobseekers with individual assessments and to offer them job integration agreements, at the latest when they have been unemployed for 18 months.

The agreement also stresses the importance of cooperation between Member States and the Commission for the best use of European structural and investments funds, in particular the European Social Fund, said Marianne Thyssen. She also emphasised the importance of integrating newly-arrived refugees into the labour market.

The Commission informed the Council of the European Pact for Youth launched at the 'Enterprise 2020' summit, held in Brussels in November 2015.

The Presidency also informed the Council of the following (current) legislative proposals: the regulation on a European Network of Employment Services, workers' access to mobility services and the further integration of labour markets (EURES) and the decision on a European Platform to enhance cooperation in the prevention and deterrence of undeclared work.

It also informed the Council of the conclusions of the conference entitled 'Digital Economy: let's be ready for the new jobs!'.

Finally, the Commission informed the Council about the European Accessibility Act.