EU Ministers for Labour, Social Policy Issues, Equal Opportunities and Health met in Brussels on 7 December 2015 for the last Employment, Social Policy, Health and Consumer Affairs (EPSCO) Council held under the Luxembourg Presidency. The part of the meeting devoted to equal opportunities was chaired by Lydia Mutsch, Minister for Health and Equal Opportunities, and Corinne Cahen, Minister for Family Affairs and Integration.

No agreement on quotas for women on company boards 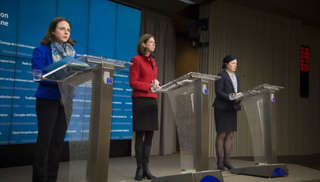 The directive on quotas for women on company boards was a key focus of the Council. Ministers failed to adopt a general approach despite the fact that the Luxembourg Presidency had redrafted the text, making it more flexible.

By way of reminder, in 2012, the Commission proposed legislation with the aim of attaining a 40% objective of the under-represented gender in non-executive board-member positions in publicly listed companies by 2020.

The compromise proposal put forward by the Luxembourg Presidency fully recognises the national measures already taken and extends the deadlines for implementation. In a spirit of subsidiarity, the Presidency introduced a flexibility clause (Article 4b) which allows Member States to suspend the directive's procedural requirements, provided that they have already taken equally effective measures or achieved progress coming close to the quantitative objectives set in the directive.

At the press conference, Minister Lydia Mutsch declared that she was 'optimistic' and 'hopeful' that the next Dutch Presidency would resolve the deadlock surrounding the dossier, but also stated that she was 'realistic' in the light of the fact that the Netherlands had opposed both the original text and the compromise proposal put forward by the Luxembourg Presidency.

This text 'provided the flexibility desired by some Member States' and two Member States have changed their position, although several others 'are not yet ready to withdraw their reservations', stressed Lydia Mutsch.

The Minister also welcomed the fact that the Council brought together Ministers for Equal Opportunities and Employment for the 'first time', sending out a 'very strong signal'.

Commissioner for Justice, Consumers and Gender Equality, Věra Jourová, thanked the Luxembourg Presidency for having drafted a text 'offering sufficient flexibility to take account of the diversity of situations in Member States'. 'It is not a matter of imposing rigid quotas, but rather of ensuring transparency in the selection process based on merit', she stressed.

On 3 December 2015, the Commission published a staff working document on the Strategic engagement for gender equality which reaffirms the five key areas for action set out in the previous strategy. Several delegations called for the Commission to implement a veritable strategic framework and to publish a communication as opposed to a mere working document.

Lydia Mutsch stated that 'the large majority of Member States have stressed the need for a more firm commitment from the Commission' in the field of equality and maintained their 'request for a stand-alone strategy at the highest political and judicial levels possible'.

Věra Jourová explained that the Commission preferred a 'more concrete' format which allows for 'rapid action' instead of working towards a 'big strategy which includes a lot of words but less actions'. She believes that the document published by the Commission is an 'important planning tool' to bring about change on the ground.

Conclusions on gender equality in the field of decision-making

The Luxembourg Presidency highlighted the issue of political, economic and social decision-making, as well as the participation of women in decision-making in areas such as science and research, the media and sport.

Lydia Mutsch drew attention to the fact that the Luxembourg Presidency organised a high-level conference in that regard in October 2015 from which it was clear that 'it is necessary to implement binding or voluntary measures in order to make significant and lasting progress'. She welcomed the fact that, for the first time, analysis of the equality of women and men in decision-making 'covers the social aspect and, in particular, the academic world, sport and the media' and that a 'new indicator concerns the leadership of political parties'.

The Council reported on the state of play of the Directive on implementing the principle of equal treatment, proposed in 2008 by the Commission, on the basis of a progress report.

The directive aims to extend the protection against discrimination on the grounds of religion or belief, disability, age or sexual orientation to areas outside employment. It would prohibit discrimination in the following areas: social protection (including social security and healthcare), education, and access to goods and services, including housing.