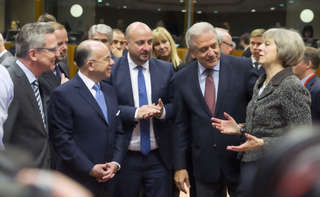 The second part of the 'Justice and Home Affairs' (JHA) Council devoted to internal security was held on 4 December 2015 in Brussels in the presence of ministers from the European Union (EU) Member States in charge of this competence. The meeting, chaired by Etienne Schneider, Minister for Internal Security, was an opportunity for the participants to adopt the compromise text agreed with the European Parliament on the proposal for a PNR directive. At the meeting, ministers also approved the agreement reached with the European Parliament on the Europol regulation, and discussed the renewed European Union Internal Security Strategy 2015-2020 and measures taken to combat terrorism.

Agreement at the Council on the proposal for a PNR directive

The draft directive seeks to govern the transfer of PNR data from airlines to Member States regarding passengers travelling on international flights as well as the processing of this data by the relevant authorities. The directive establishes that the PNR data gathered may only be processed for the purposes of preventing and detecting terrorist acts and serious crime, as well as related investigations and proceedings.

At the press conference that followed the Council meeting, Minister Schneider said 'not without pride' that the Council had been able to reach an agreement with a view to putting in place European PNR. 'Alongside the European Parliament and the Commission, we are coming close to our common goal of equipping the EU with an effective PNR system that fully respects fundamental rights and freedoms', he said, stressing the trilogue negotiations, which had been conducted in a 'constructive spirit'.

Dimitris Avramopoulos, European Commissioner for Migration, Home Affairs and Citizenship, welcomed a 'balanced and proportionate' agreement which would make it possible to improve the security of citizens, while respecting their rights. In his view, 'the more we are faced with these (terrorists - editor's note) risks, dangers and threats, the more we need to exchange information', and this is particularly true today in the age of globalisation. 'The more we exchange information, the more we will be able to meet our security commitment to European citizens', he said.

In April 2012, the JHA Council issued a general position on the draft PNR directive. The Council and the European Council had regularly stressed that the adoption of the Directive is a matter of urgency owing to the growing threat posed by foreign combatants.

On 15 July 2015, the European Parliament's Committee on Civil Liberties, Justice and Home Affairs (LIBE) adopted a revised report on the directive and a mandate for opening negotiations with the Council. One of the most delicate points in the negotiations concerned the period during which data sent by air carriers to Member States could be kept without 'masking out' elements which would make it possible to identify travellers, since some Member States wished to obtain a period of at least one year, whereas the European Parliament, in its most recent official position, refused to go beyond six months.

Etienne Schneider welcomed the fact that the Member States had 'constructively' agreed to a retention period of six months, as well as their intention to include intra-Community flights and 'non-carrier economic operators'. He also said that a statement of intent had been signed by the 28 EU Member States.

The Council has endorsed the agreement reached with the European Parliament in the 26 November 2015's trialogue on a draft regulation on the European Agency for law enforcement cooperation and training (Europol). 'This is a great success for our Presidency', stressed Etienne Schneider.

The primary aim of the new draft regulation is to align the current Council decision on Europol with the new rules deriving from the Treaty of Lisbon, specifically by inserting some provisions on parliamentary control, changing Europol's external relations to comply with the new rules in the treaty and appointing the European Data Protection Supervisor as the monitoring body responsible for supervising data protection for Europol. In addition, the draft regulation aims to provide Europol with a flexible, modern data management system, and aligns Europol's governance with the general guidelines applicable to agencies.

Minister Schneider again welcomed a 'political agreement which fully complies with the negotiation mandate given by the Council in June 2014', adding that it would make it possible to provide Europol with a solid legal basis, enabling it to develop its potential to the full, in the service of the Member States, while respecting the prerogatives of each of them.

For his part, Commissioner Avramopoulos said that the reform would make Europol 'more operational, responsible and effective', adding that the agency would act as 'a hub for information exchange in the counter terrorism fight'. The Commissioner also announced that a European Counter-Terrorism Centre would be launched at Europol on 1 January 2016.

The Council had an exchange of views on the implementation of the renewed internal security strategy for the European Union, adopted in June 2015, for which the ministers had developed a 'functional and dynamic methodology' intended to lay down measures to implement over the next six months. Etienne Schneider said he was 'fully satisfied with the results', pointing out that this was a 'priority' for the Luxembourg Presidency. He also said that the forthcoming Dutch Presidency had already announced its 'intention to make use of our model for the next six months'.

Ministers also received information from the Presidency, based on a report by the EU Counter-Terrorism Coordinator, on the implementation of measures to combat terrorism, extending the declaration made by the leaders of the EU on 12 February 2015 and the extraordinary JHA Council of 20 November 2015. Etienne Schneider reminded listeners that during that meeting, ministers had adopted some conclusions on the subject, relating, among other things, to putting in place systematic checks at the EU's external borders, including on individuals enjoying the right of free movement, through the relevant databases, and to ensuring that the national authorities systematically enter data on all foreign terrorist fighters into the second-generation Schengen information system (SIS II).

The Commissioner also indicated that the Commission is in the process of looking at measures to be put in place relating to terrorism financing. 'We do not have any time to waste', he said, stressing the need to 'work together constantly' to ensure that the security and freedom of European citizens are 'never compromised'.

The Council also confirmed the agreement agreed in trialogue with the European Parliament on 17 November 2015 on a proposal for a directive on the conditions for the entry and residency of third-country nationals for the purposes of research, studies, pupil exchange, remunerated and unremunerated training, voluntary service and au pairing. The Committee of Permanent Representatives (Coreper) adopted the compromise text on 26 November.