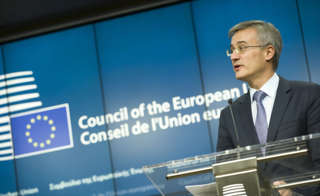 Ministers for Justice of Member States of the European Union (EU) met in Brussels on 3 December 2015 for the first part of the "Justice and Home Affairs" (JHA) Council, chaired by Félix Braz, Minister for Justice. In particular, participants were able to reach an "agreement in principle" on the draft regulation on the European Public Prosecutor's Office, but they failed to agree on regulations on matrimonial regimes and the property consequences of registered partnerships. They also confirmed the political agreement reached in a trilogue on a regulation simplifying the acceptance of certain public documents in the EU.

The Council failed to reach a political agreement on two compromise proposals concerning Council regulations on jurisdiction, applicable law and the recognition and enforcement of decisions regarding matrimonial regimes and the property consequences of registered partnerships.

These two regulations in particular aim to determine the jurisdiction and the laws applicable to matrimonial regimes and the property consequences of registered partnerships with cross-border implications, and to ensure the free movement of judgments in that area.

On this issue, the European Commission had submitted its proposal in March 2011 and the European Parliament had voted in September 2013. The latter had been asked for its opinion under the special legislative procedure where the Council shall act unanimously.  In November 2015, the Luxembourg Presidency submitted compromise proposals on the two texts to the national delegations in an attempt to achieve unanimity.

"Both proposals offer tangible benefits to our citizens in that they provide greater legal certainty and predictability to plan their property relations", said Félix Braz at a press conference after the meeting, adding that it was "essential to recognise the rights of international couples within the Union".

However, even though the Minister said that there was "a very broad support for balanced compromise texts, presented by the Presidency with the constructive support during works of many Member States", he "particularly lamented" the refusal of Poland and Hungary, who prevented its adoption. "The Polish and Hungarian positions have also caused some misunderstanding and are greatly disappointing for my colleagues", said the Luxembourg Minister.

Nevertheless, he believes the debate has also "brought some hope for the future of these two issues", noting that "many Member States have already confirmed their willingness to work towards enhanced cooperation" which is foreseen by the treaties to make progress on issues that do not reach a unanimous agreement in the Council, and that the Commission has supported this solution. This enhanced cooperation, which the Minister hopes will include the largest number of countries, will be based on the latest compromise texts from the Presidency, he added.

The Minister also stated that the two issues will continue to be handled together. "We cannot accept married couples and couples in registered partnerships to be treated differently".

The Ministers also discussed certain provisions of the draft regulation establishing a European Public Prosecutor's Office, an issue "requiring a lot of stamina", noted Félix Braz at the press conference.

In this regard, the Ministers were able to reach "an agreement in principle on a very difficult part of the regulation, namely the jurisdiction of the European Public Prosecutor's Office and procedures to exercise that power", said Félix Braz.

In that regard, the Presidency gave a follow-up overview of the works related to the Directive on the protection of the EU's financial interests (PFI) which sets out, inter alia, the material scope of competence of the European Public Prosecutor's Office, pursuant to the CJEU's "Taricco" judgment of 8 September 2015 establishing a link between serious VAT fraud and damage to the financial interests of the EU. "I can see now some open-mindedness towards the inclusion of VAT in the scope of the instrument", said Félix Braz on this issue, while the Commissioner for Justice, Consumers and Gender Equality, Věra Jourová, stressed the need for VAT, as an EU resource, to be protected.

Félix Braz said he was "very happy" that the Council has confirmed the political agreement reached during a trilogue between the Presidency, the European Parliament and the European Commission on 13 October 2015, on a regulation to promote the free circulation of citizens by simplifying the requirements to present certain public documents in the EU. The Permanent Representatives Committee had already approved on 21 October 2015 the compromise package agreed with the European Parliament.

"Thanks to this instrument, each citizen can now present the public documents issued by its Member State with a standard translation form. This means that they will no longer incur translation costs or other expenses such as Apostille fees", said the Minister. Commissioner Jourová meanwhile welcomed the agreement, which will "make life easier for European citizens".

The Ministers held a general discussion on the consequences of the invalidation of the Directive on the retention of electronic communications data, on the basis of a Presidency report.

On 8 April 2014, the Court of Justice delivered a judgment (called 'Digital Rights'), by which it invalidated the 2006 Directive on data retention, primarily based on Articles 7 and 8 of the EU Charter of Fundamental Rights, which reaffirm the protection of privacy and personal data.

"This is the first time since the judgment of the Court of Justice [...] that Ministers have had a real exchange of views on the subject", said Félix Braz, adding that he had thought it was "important" to hear how the EU Ministers for Justice analysed the situation. "There are indeed a variety of situations across the Union", he said, adding that a large number of Member States would like solutions be made available at EU level.

Under the Directive on data retention, Member States were obliged to impose upon providers of publicly available electronic communications services or public communications networks, the obligation to retain traffic and location data to investigate and prosecute serious offences for a period ranging from six months to two years.

The Council gave a progress report regarding work on the possibility of modernizing the system for mutual legal assistance and resolving difficulties involved in the collection and use of electronic evidence in criminal proceedings, on the basis of a Presidency report. "It is essential that we enable the criminal justice system to adapt to new technology that may present certain difficulties, especially concerning mutual legal assistance", said the Minister.

Online hate speech was also on the Ministers' agenda during the meeting, as they had asked the Commission to discuss with service providers at their Council on 9 October.

"This dialogue is essential to adequately tackle this phenomenon", said the Minister, noting that "there are criminal legislations against cybercrime and they must be respected by everybody".

Commissioner Jourová announced the launch of an "internet forum" on the same day to fight against radicalisation and terrorist propaganda online, with companies such as Facebook, Twitter, Google and Microsoft. She stated that companies had been asked to send data to the Commission, in particular on removing criminal content on the Internet, implementing the legal framework and how to combat clear cases of hate speech online. She also reiterated the Commission's commitment to guarantee freedom of expression in this context.

Minister Braz also focused on the progress of trilogue negotiations on the reform of data protection, notably following the adoption of the Council's negotiating position on the draft directive on data protection in October 2015.

This draft directive is part of the complete package of legislative measures on data protection proposed by the Commission on 25 January 2012, which also includes a general regulation on which the Council had agreed a general approach in June 2015.

On this issue, the Minister noted that the negotiations "are progressing well" and said he is confident that a conclusion will be reached "on both issues by the end of the year".

Court of Justice of the EU reform

Félix Braz said that the Council formally adopted  the reform of the statute of the Court of Justice of the European Union  (CJUE). "This reform provides a sustainable and long-term solution to the challenges currently facing the General Court and will allow it to fulfil its duties on time and with quality standards that European citizens and companies may require in a Union based on the rule of law", he said.